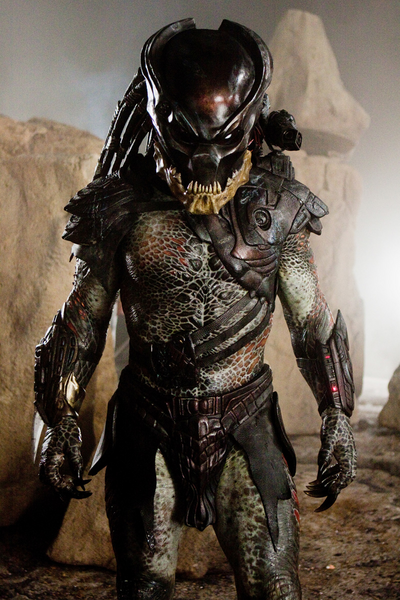 Berserker is the murderous, incredibly skilled leader of a Super Predator Clan that abducted humans to bring them to their game preserve planet to hunt for sport. Unlike most of his kind, he is no honorable hunter and instead butchers and kills even helpless prey without issue and takes joy in the slaughter.

Powers and Abilities: Superhuman Physical Characteristics, Enhanced Senses (He can see in the infrared spectrum, and, with his Bio-Mask, he can see across the electromagnetic spectrum, such as in ultraviolet and more detailed infrared, and identify the emotional states of others), Martial Arts and Weapon Mastery, Plasma Manipulation, Invisibility, Longevity (Predators can live for hundreds to even thousands of years), Resistance to acid (A Predator's blood can neutralize Xenomorph acid to lessen its effects), disease (Predators have advanced immune systems that render them highly resistant to most bacteria and viruses), and radiation (Predators can survive exposure to amounts of radiation that would prove lethal for humans)

Attack Potency: Wall level (Overpowered and killed another Predator, and is almost certainly superior to Celtic, a Young Blood who broke through pillars in his fight against Grid, a Xenomorph Warrior), up to Multi-City Block level+ with weaponry (Plasmacasters can destroy dropships with a single shot), Town level with self-destruction (The Jungle Hunter's self-destruction destroyed 300 city blocks of rainforest).

Speed: Subsonic (Predators can move faster than the eye can follow) with Supersonic reactions (Should be comparable to other Predators, who can dodge 30 rounds of gunfire)

Lifting Strength: At least Class K (Can easily rip out human skulls with their spines still attached with a single hand, which would require around 1 million newtons, or 101~102 tons-force)

Stamina: High. Berserker was able to take multiple hits from Royce and a sniper shot from Isabelle straight through his chest and continue fighting.

Standard Equipment: A number of weapons.

Intelligence: Berserker is an incredibly skilled hunter and warrior, and, unlike most of his kind, completely relentless and dishonorable, fighting and butchering even the weak and helpless in search of the joy of hunting.

Weaknesses: Predators evolved to breathe a slightly different atmosphere than Earth's and often require breathing apparatuses to breathe properly, though these are not necessary for survival. Their blood glows in the dark, making it easy to track them by it in low-light conditions. A Predator's cloaking systems short-circuit when exposed to water.

Retrieved from "https://vsbattles.fandom.com/wiki/Berserker_(Predators)?oldid=5573771"
Community content is available under CC-BY-SA unless otherwise noted.