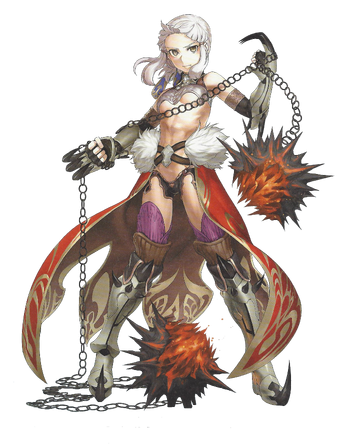 Berserker is a Berserker-class Servant able to be summoned by Ritsuka Fujimaru in the Grand Orders of Fate/Grand Order. She first appeared under the name “Berserker of El-Dorado” in the Agartha Sub-Singularity during the events of the Epic of Remnant.

Her True Name is Penthesilea, an Amazon queen from Greek Mythology and born amongst several other daughters of the God of War himself, Ares. She is also sisters with the previous queen of the Amazons, Hippolyta, who had her sash and life taken by the Greek hero Heracles.

In the later years of Penthesilea’s life, she led a charge against the Archean army to assist the Trojans following Hector’s death. Amidst the charge did she eventually find herself in a battle against the Trojan hero’s killer, Achilles. Though she fought fiercely against the Greek hero himself, she eventually fell to him in battle and rather than be acknowledged by her opponent for her strength, she was instead acknowledged for her beauty. An event that caused her to forever hate the man and making the latter forever hesitant putting his spear up against any female opponents.

Age: Unknown (Is summoned in a form much younger than the one she appeared in during the Trojan war)

Powers and Abilities: Superhuman Physical Characteristics, Weapon Mastery (Is skillful in the use of her claws, swords and spiked ball weapons), Expert Hand to hand combatant, Summoning and Transformation with Trojan Reinforcement, Mind Manipulation and Social Influencing with Charisma and Howl of the War God (Her howl can boost the morale of her allies and cause mental trauma to her enemies, and she can subtly manipulate people with Charisma), Curse Manipulation (Cursed Achilles to one day take the life of the person he loves with his spear), Berserk Mode and Rage Power and Servant Physiology

Attack Potency: Island level (Has the same ranking as Heracles and thus should be equal to him. Can harm Megalos, who is Heracles that had his Saint Graph changed and modified by Scheherazade's Noble Phantasm used in conjunction with Phenex's power, resulting in Heracles power being greatly increased). Higher with Outrage Amazon (A B-rank Anti-Unit Noble Phantasm that should be stronger than her normal attacks, is noted to be the ultimate “Anti-Achilles” technique due to its fierce output being able to maim and kill even strong heroes like Achilles himself)

Speed: Massively Hypersonic (Can keep up with most Servants. Fought against Achilles in life, but was inferior in speed to the latter)

Lifting Strength: Class 25 (Should be at least as strong as Saber at her peak)

Stamina: High (Can keep up with Servants who can fight endlessly for days), higher provided she is given sufficient mana

Standard Equipment: A pair of bladed claws and spiked balls, a pair of swords in further ascensions

Intelligence: As a Queen of the Amazons, Penthesilea was a very capable leader, having been able to lead 12 elite amazon warriors of noble lineage into the Trojan War following, Hectors death. In addition, as she is the Queen of the Amazons and a demigod daughter of the war god Ares, she is an extremely skilled, fierce and brutal warrior, that can use multiple different weapons such as swords, claws and spiked balls. In her older form, she is able to be summoned as a Lancer, Archer, or Rider-class Servant further showcasing her mastery of weapons and possibly mounts. However despite her prowess as a warrior, she was defeated by Achilles in a one-on-one duel.

Weaknesses: Cannot attack while in spirit form. Going into a rage or using Outrage Amazon will cause her to lose all intellect and could even make her think of herself as Achilles, potentially causing disastrous effect on herself and to her battle skill. Using Trojan Reinforcement will cause Pentheselia to grow into her older form and cause immediate self-destruction to her being due to the self-contradiction it brings of her never wanting to be in her older form that goes with it.

Outrage Amazon: A Hero To Die On My Rage: The crystallization of Penthesilea’s vengeance against Achilles for insulting both as a woman and as a warrior that has manifested into a Noble Phantasm. When active, everything inside her, from her soul as a warrior to the blood of Ares that runs through her veins, become risen and excited throughout her entire being. Her consciousness, in turn, throws away all reason that she has, making her a true madden warrior hellbent on killing Achilles. Even if said hero was not present, those before her will be seen as him and will thus attack them with everything she has before finally ending their lives with a bite just like a wild beast.

Trojan Reinforcement: Warriors to Rush Upon My War Cry: A Noble Phantasm that summons the 12 Amazons that fought beside Penthesilea in their attempt to save Troy following Hector's death during the Trojan War. Each of them are powerful elite warriors of noble lineage who has sworn loyalty to her, and each of them boasts strength equal to a thousand soldiers. They possess a particularly high affinity for Pentheselia's Howl of the War God, giving them its beneficial effects several more times that than other Amazons. This very Noble Phantasm is linked to the older form of Pentheselia that fought in the Trojan war, something she in her Berserker form avoids and is thus fundamentally not used in this iteration and form though it is possible that this could be used were she to be summoned in a different class. Should Pentheselia truly utilize this Noble Phantasm while as a Berserker, she will transform into her aged up form from the war but doing so causes a self-contradiction to her hatred of that form that will lead to her own destruction engraved upon her spirit core.

Mad Enhancement: The source of the Berserker class's power, raising their statistics in exchange for a loss of sanity. Despite boasting an extraordinary EX rank in this skill, Penthesilea retains most of her reason and ability to think, thus enabling her to be able to hold conversations and mutual understanding with another person. When confronting Achilles, however, all reason is thrown out and she becomes a madden warrior filled with intense bloodlust against the legendary Greek Hero for her death and insult to her as a woman and warrior. Being called beautiful can be another way for her to lose all reason and go into a flying rage. Even if she were to confront other Greek heroes, she will lose some of her reasoning though not as much as when facing Achilles himself.

Charisma: The natural talent to command an army, which increases the ability of allies during group battles. At a rank of B, it is said to allow a king or queen to sufficiently lead their nation and its people. Having once led the Amazons as their queen after her late sister and leading the 12 elite Amazon warriors during Trojan war following Hector's death, she is given such a rank for this skill.

Divinity: The measure of one's Divine Spirit aptitude, reflected in high ranks by the user becoming part Divine Spirit. At A-rank, it is even an indicator as one who has reached the Throne of Gods. Additionally, it possesses another effect that allows one to reduce "Anti-Purge defense" in proportion to the rank of their Divinity, allowing them to break through defensive abilities such as Protection of the Faith and Saver's Enlightenment of the Sacred Fig. Being the daughter of the God of War, Ares, she is given the rank of B.

Golden Rule (Beauty): A skill of Pentheselia’s which donates that, no matter how she grows up and what she does in her life, she will always show a predetermined growth of a woman whose existence will be mistaken for that of a goddess’s. When the time of the Trojan War came to be, her body had become exactly to that where one would have mistaken her as a goddess. Thus, when Achilles came to remove the Amazon queen’s helmet after their battle, he founded himself dumbstruck to the point that the first thing that came to his mind was not of a woman that fought as a fierce warrior, but a woman that he considered as beautiful.

Howl of the War God: A howl that will awaken the blood of the War God that runs through her veins. When yelling with this howl, it will cause Penthesilea’s allies to all bravely stand together as warriors being lead by the very War God himself. It had been said during the Trojan War that when the Amazoness forces made their war cry, the forces of their enemies trembled in their wake. In the case of Penthesilea herself when confronting any heroes of Greek mythology or those whose scent share a similar origin, she will howl like a mad warrior and whose screams will not stop until all of their lives are wiped out.

Boa Hancock (One Piece) Hancock's profile (7-A versions were used)