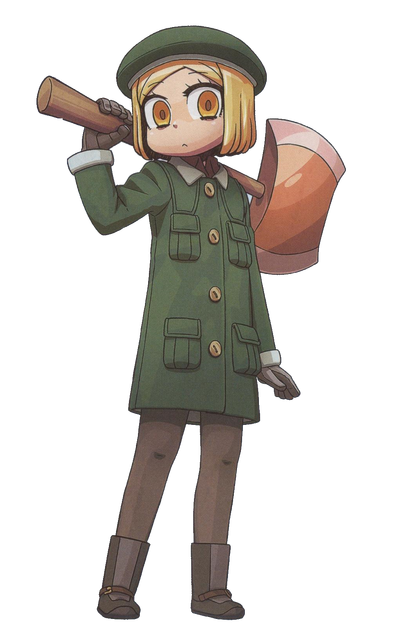 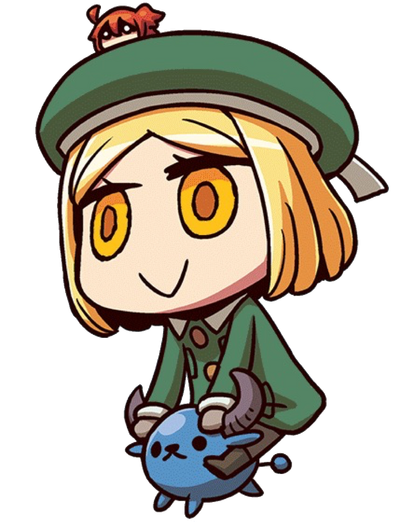 Berserker is the Berserker-class Servant of Gudako in Learn More with Manga! FGO, later reappearing in Fate/Grand Order.

Her True Name is Paul Bunyan, a legendary giant lumberjack from American folklore, originating in the Pioneer era as a tall tale. As much of North America's geography was said to have arisen from Bunyan's exploits, she can be thought of as the creator of the United States of America. Why on earth she was summoned as a girl is a question for the ages.

Powers and Abilities: Superhuman Physical Characteristics, Adept Axe and Chainsaw user, Rage Power and Berserk Mode, Sizeshifting (Can grow many times in size at will), Breaking the Fourth Wall and Servant Physiology

Attack Potency: Island level (Comparable to other Servants, such as Archer). Higher with Marvelous Exploits (As an A-rank Anti-Army Noble Phantasm, it should be comparable to Hector's Durindana, which can pierce God Hand and mortally wound Asterios).

Speed: Massively Hypersonic (Comparable to other Servants, such as Saber and Zero Lancer), higher with Marvelous Exploits (Easily jumps up above cloud level when using Marvelous Exploits, and stomps down from cloud height quickly, said to have the most astonishing speed amongst Noble Phantasms)

Lifting Strength: Superhuman (Even the weakest Servant is stronger than the finest athletes)

Stamina: Very high. Other Servants can fight for nearly an entire day without stopping.

Standard Equipment: Her axe, and Babe the Blue Ox.

Intelligence: Bunyan is childish and overly destructive due to the effects of Mad Enhancement.

Weaknesses: Bunyan's size changing is limited by her environment. She cannot fight in Spirit Form.

Marvelous Exploits: Exploits to be Astonished By: Paul Bunyan's main Noble Phantasm. She claims that it takes the concept of the United States of America itself, and converts its history into energy to smash down all who oppose her... but, in reality, she just gets really big and stomps on her opponents. It's said to have the most astonishing speed among Noble Phantasms, however.

Dakota Camp: A Noble Phantasm that takes the form of a phenomenon where anyone who makes even a single conversation with her is considered a member of her camp. From there, anyone who has become part of her camp goes to pick up axes and shovels to go and cut down trees and level the ground at an astonishing efficiency due to Bunyan's leadership.

Wisconsin Death Trip: A Noble Phantasm with unknown abilities, manifesting in the simple form of a pink chainsaw, which Bunyan uses in her Third Stage Ascension in Fate/Grand Order.

Mad Enhancement: The source of the Berserker class's power, raising their statistics in exchange for a loss of sanity. In some cases, it can also seal away certain Skills, fighting techniques and even Noble Phantasms. Bunyan's D rank Mad Enhancement ranks up her Strength and Endurance and, rather than maddening her reasons, instead maddens towards the foundation of her existence; as a result, she is unable to truly ascertain whether she had been spoken of as a man or woman in the legend.

Saint Graph Expansion: A skill similarly yet different from the Shapeshift Skill. In Bunyan's case, it allows her to enlarge and strengthen her Saint Graph while retaining her form. It also depends on her environment and surroundings, as she may only be able to touch the ceilings of a roof if enlarged inside a room but may be able to enlarge herself to her true size as a giantess when out in the open.

Bean Soup Lake: A skill that originates from the anecdote of where Bunyan's camp settled around a whole lake made bean soup out of it that was enough to last a season with. With this, Bunyan is able to provide meals for as many as tens of thousands of her allies.

Happy Comrades: A skill which originated from where numerous abnormal stalwarts gathered under Bunyan, seemingly allowing Bunyan's allies and the crops she's raised to be enormous as her.

Popcorn Blizzard: A skill formed from the anecdote of animals freezing to death after mistaking the shell of popcorn Bunyan ate and discarded through the sky, of which they mistook it as a blizzard. It is unknown whether the cold death is from an unconscious mind attack or a warp of reality from Bunyan's influence.