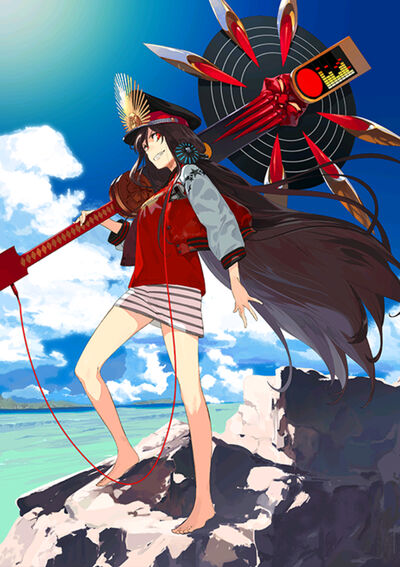 Berserker is a Berserker-class Servant able to be summoned by Ritsuka Fujimaru. She makes her debut in the Dead Heat Summer Race! event.

Berserker's True Name is Nobunaga Oda, the Demon King of the Sixth Heaven and one of Japan’s three unifiers. While normally an Archer, she has changed form and in Saint Graph in response to the Summer season along with obtaining a strong affinity towards rock n’ roll music and replacing her matchlock firearms with a guitar weapon that she can use in a manner akin to an axe as well as simply playing it.

Powers and Abilities: Superhuman Physical Characteristics, Fire Manipulation, Increases in power against those with high Divinity and/or Mystery, can summon a limited form of her Reality Marble as a giant skeleton to fight her foes with, Shapeshifting, Supernatural Luck, Minor Fate Manipulation (Servants with B-rank Luck or higher can change their own fates to evade inevitable outcomes such as having their hearts destroyed by Gáe Bolg), Berserk Mode, Rage Power and Servant Physiology

Attack Potency: Island level (Fought against Artemis, Nightingale, Yan Qing, and the latter again when they transformed into Quetzalcoatl). Varies with Nobunaga THE Rock 'n' Roll (An Anti-Divine Noble Phantasm with an E~EX-Rank. It displays incredible power against those with high Divinity and Mystery, but is considerably less powerful when used against those who lack it)

Speed: Massively Hypersonic (Has B rank agility and can keep up with most Servants)

Stamina: High (Comparable to Servants who can fight an entire day without rest when provided with mana)

Standard Equipment: Her guitar, the Heshikiri Hasebe (which also contains rotary blades that allows it to function as a weapon)

Intelligence: Nobunaga possesses the same mindset as her normal archer self despite the change in class. Instead of using her sword and matchlock rifles, she has opted to use her guitar in combat as a weapon. While primarily her weapon for close range by using the pointed protruded blades to cut and tear her enemies apart, she has also used it as an instrument to play along with burning her enemies with fire. Additionally, she has also converted her Noble Phantasm into a limited state in the form of a giant, red skeleton that floats behind her to pummel her enemies as she freely plays her guitar in tune.

Weaknesses: Cannot fight in Spirit Form. Her Noble Phantasms effect is lower against those who lack Divinity and/or Mystery, and prolonged use of it can potentially even burn her alive.

Nobunaga THE Rock 'n' Roll: Papiyas, the Demon King of the Sixth Heaven ~Summer Fever~: The Noble Phantasm of Oda Nobunaga while in her swimsuit form. Utilizing a limited form of her Reality Marble Noble Phantasm by converting it into the form of a giant skeleton in flames that manifests behind her, where Nobunaga rushes towards the enemy and has the giant pummel them with “Demon King-like strength” before finishing with a damaging uppercut. In addition, it retains the same bonus effect against those with Divinity and Mystery, making it as devastating as her normal versions should her enemy possess either trait. However, it has the downside of potentially burning her and, due to her class container in this form being more dangerous, she has to cool herself down to prevent it from happening.

Mad Enhancement: The source of the Berserker class's power, raising their statistics in exchange for a loss of sanity. Nobunaga's C-Rank ranks up all of her parameters besides Luck and Mana while normally making it difficult for her to speak or think properly. However, in her case, she still acts like her normal self.

Atsumori Beat: A fighting style centered around dancing, making the beat of the Atsumori resound across the battlefield. While seemingly a superficial skill, it is superbly powerful and brings about certain death.

Demon King of the Sixth Heaven of the Beach: A skill derived from her Archer counterpart's Demon King. It changes Nobunaga herself based on her personal image of summer, altering her appearance, abilities and attitude.

Foolish Murder Style: A skill that reflects Nobunaga's reckless attitude. In life, she did things like set up firecrackers in tea kettles and ding-dong dashing Buddhist temples. As a result of these being all that she cares about, it powers up her close-combat skills while carrying battles out with inconceivably foolish ideas.

Retrieved from "https://vsbattles.fandom.com/wiki/Berserker_(Nobunaga_Oda)?oldid=5718142"
Community content is available under CC-BY-SA unless otherwise noted.