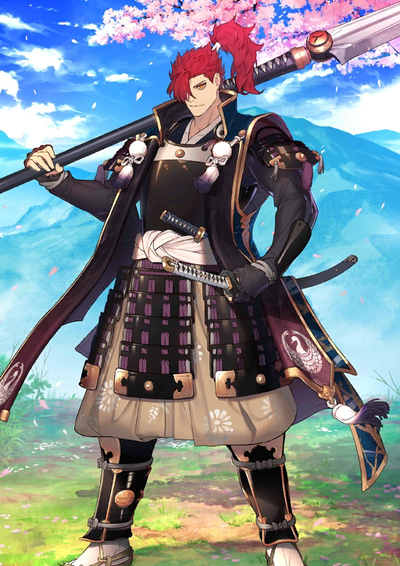 Berserker is a Berserker-Class Servant able to be summoned by Ritsuka Fujimaru in the Grand Orders of Fate/Grand Order, first appearing as ally servant in the GUDAGUDA Final Honnoji event.

Berserker's true name is Mori Nagayoshi, the son of Mori Yoshinari from the Oda clan, and the elder brother of the famous Mori Naritoshi who served as Nobunaga's attendant. A brave warrior who's earned the nickname Oni Musashi for his many military exploits and the spearmanship that was taught to him by his father who was famed as "Sanza the Attacker”.

Powers and Abilities: Superhuman Physical Characteristics, Weapon Mastery, Energy Projection, Regeneration (Mid; Likely recovered after Li Shuwen stabbed him in the head and Okita stabbed him in the heart), Rage Power, Berserk Mode (Has a berserk state no matter what class he is in), Durability Negation (His Noble Phantasm phases through all of opponent's defenses, piercing then as if they're bones aren't even in their bodies), Immortality (Type 1, 2 and 3; As long as he wears his armor, he will continue fighting until his armor blows off from his body), Statistics Amplification and Servant Physiology

Speed: Massively Hypersonic (Kept up with Nobunaga and Kagetora)

Intelligence: Nagayoshi is an incredibly skilled and fearsome combatant, easily decapitating 27 warriors and slaughtered massive amounts of people throughout his life, capable of fighting even Kagetora, the strongest of the Sengoku Period, in an even ground. His management of his own territory was great as well, and even some called it as flawless.

Weaknesses: He can't fight in Spirit Form. His amplification of offense decreases his defense.

As If It Was a Human Without Bones: A Noble Phantasm tracing its name from the fact that, faced with this spear, humans are cleaved with such ease that they appear boneless, ignoring any defense of the opponent, piercing opponent's body without any resistance. With minimal Prana consumption, this Noble Phantasm is simple yet extremely powerful in actual combat, and it also has an another variant in the form of partisan.

Mad Enhancement: The source of the Berserker class's power, raising their statistics in exchange for a loss of sanity. Nagayoshi's D-rank Mad Enhancement boosts his Strength and Endurance parameters, but robs much of his linguistic ability and makes it difficult for him to keep track of complex thoughts.

Blood-Soaked Recklessness: A skill from the sanguinary tale of his, in which he stained his clothing in the blood of fallen foes. Granting increasing offensive power as he continually attack the enemy, this skill lowers his defensive capacity in exchange.

Mental Pollution (Wicked): An abnormal mentality displayed on the battlefield. It creates difficulties in establishing mutual intelligibility with any target, including the Master, causing rampages. With his brutality augmented, he would remain in battle until he slaughters his enemies or dies himself.

Demon Musashi's Will: The last will and testament left by Nagayoshi. Two separate effects are activated when the skill is activated and when he is rendered incapable of combat, respectively.

Retrieved from "https://vsbattles.fandom.com/wiki/Berserker_(Mori_Nagayoshi)?oldid=5718035"
Community content is available under CC-BY-SA unless otherwise noted.