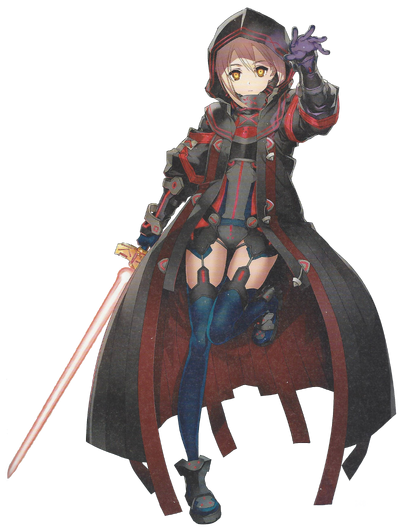 Powers and Abilities: Superhuman Physical Characteristics, Enhanced Senses, Skilled Swordswoman, Limited Precognition, Minor Mind Manipulation and Social Influencing with Sovereign's Invisible Hand, Energy Projection with Cross-Calibur (Powerful enough to reduce her foes to elementary particles), Telekinesis, Electricity Manipulation, Resurrection (Any servants originate from Servant Universe doesn't permanently die, and instead they respawn in different parts of the universe after an extended period of time), Fire Manipulation (Can easily create flames), Transmutation, Power Manipulation, Spatial Manipulation, Reality Warping, Time Manipulation, Mind Manipulation and Summoning (Has full control of Infinite Bean Paste after her training in afterlife, capable of utilizing it's potential and can even summon other servants with it, including top servants like Siegfried and Divine Spirits like Ishtar), Berserk Mode and Rage Power and Servant Physiology

Attack Potency: Island level (Possesses A-Rank Strength, making her comparable to Heracles). Large Island level with Cross-Calibur (Comparable, if not superior, to the original Excalibur due to its dual-bladed nature). Far higher with Infinite Bean Paste (Said to be able to hold infinite power and snap away half of the universe to create a confectionery factory)

Lifting Strength: Class 25 (Should be comparable to Saber)

Stamina: High (Servants can fight for an entire day without tiring and continue fighting for as long as they have sufficient mana. Capable of further sustaining her mana supply through consuming food)

Range: Extended melee range, several meters with Alter Lightning, several dozen kilometers with Cross-Calibur (Has a maximum range of "99", far higher than that of a thrown Gáe Bolg)

Intelligence: Contrary to her class, MHX Alter is a composed and intelligent individual, being refined and well-educated in contrast to the mindless behavior of most Berserkers. Her Instinct has refined in the use of a blade with her skill pushed to the extreme, and is skilled enough in combat to match MHX and defeat the Servant Universe version of Charles Babbage, who could best even a Knight of the Round Table in combat. Additionally, her Sovereign's Invisible Hand skill makes her a talented leader, bringing out the best in regards to the talents of her allies.

Weaknesses: Cannot fight in Spirit Form. Despite her immense potential, she only uses her powers of infinity for chocolate

Cross-Calibur: Twin Black Dragon Sword of Promised Victory: A variation of the original Excalibur. MHX Alter lunges at her opponent and slices them repeatedly, before overloading her Altreactor and creating an X-shaped blast from a surge of mana, reducing the target to elementary particles. Additionally, much like MHX's Secretcalibur, it deals additional damage against swordsmen.

Mad Enhancement: The source of the Berserker class's power, raising their statistics in exchange for a loss of sanity. Despite MHX Alter's C-Rank in this skill, she maintains much of her sanity, with her personality being more bookish, as opposed to robbing her of her sanity and reasoning. As is standard, it also ranks up all of her parameters besides Luck and Mana.

∞ Black Bean Paste: An item in MHX Alter's possession, made through the six fundamental forces of Desire (Soul), Sugar (Power), Sales Location (Space), Cost Price (Reality), Production (Time), and Demand (Mind). While it is said to grant its wielder infinite power and turn half of the universe into a confectionary factory with a fingertip, MHX Alter does not know how it functions. It is a parody of The Infinity Gauntlet

Altreactor: A mana conversion reactor empowered by Alternium crystals in her body. It converts calories and sugar to magic energy, allowing her to receive a steady supply of mana by consuming food.

Instinct: The power to "feel" the course that leads to the best possible outcome in battle. While MHX Alter's mind is insatiable and lazy, she has both refined her skill with the sword and pushed it to the extreme, granting her a C-Rank in this skill.

Sovereign's Invisible Hand: A skill denoting lessons taught to her by Agravain, instructing her on how to be a dark emperor. Functionally similar to Charisma, it allows her to bring out the capabilities of her equals to their utmost potential while reading the flow of battle of her enemies.