VS Battles Wiki
Register
Don't have an account?
Sign In
Advertisement
in: Characters, Nasuverse, Fate,
and 29 more 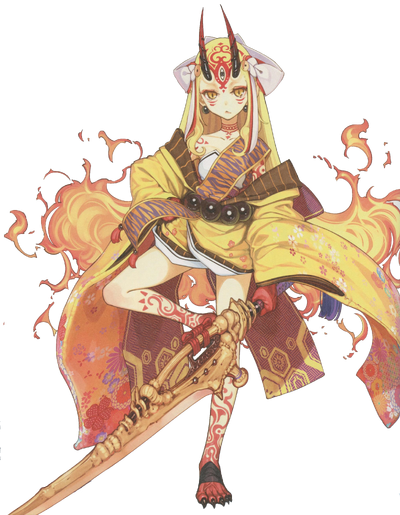 Her True Name is Ibaraki-douji. During the Heian period, one of the Oni that appeared on the imperial capital and exhaustively carried out atrocities. Regarded as a subordinate of Shuten-douji that lived in Mt. Ooe, it has been said that - during the "oni extermination of Mt. Ooe" by Minamoto no Raikou and her Four Heavenly Kings - she crossed sword with Watanabe no Tsuna of the Four Heavenly Kings.

The sole survivor of Mt. Ooe's oni, she attacked Watanabe Tsuna on the Rashoumon (or the Ichijou-modoribashi) at the imperial capital and ended up having her arm cut off. While said arm was temporarily snatched away as a spoil of war, Ibaraki would later retrieve it and disappear to parts unknown.

Attack Potency: Island level (Fought Mash and Kintoki. Later fought them again alongside Shuten-douji in Onigashima with Kotaro, Benkei, and Ushiwakamaru, with the two overpowering them and would have won were it not for Raikou appearing in time), Island level+ with Great Grudge of Rashoumon (A B-Rank Anti-Unit and Anti-Army Noble Phantasm, making it superior to C-Rank Noble Phantasms like Triple-Linked Crane Wings)

Speed: Massively Hypersonic (Has B Rank Agility and should thus be comparable to most other Servants, such as Gilgamesh, who is on par with Enkidu)

Durability: Island level (Has an A+ Rank Endurance, superior to Berserker)

Intelligence: Ibaraki-douji is one of the legendary onis/demons that was under Shuten-douji, one of Japan's Three Great Monsters, being a "subordinate" she experienced many battles, even fought against one of Raikou's Heavenly Kings. Her fighting experience still retains as she was able to fight both Mash and Kintoki, another member of Raikou's Heavenly Kings, over and over for a week during the events in Rashomon.