VS Battles Wiki
Register
Don't have an account?
Sign In
Advertisement
in: Tier 6, Tier 6-C, Tier Low 6-B,
and 42 more 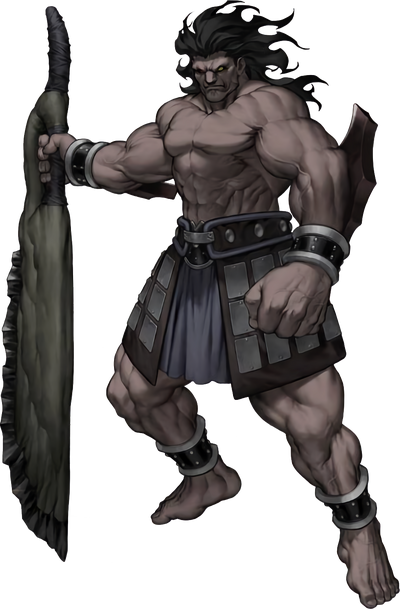 Berserker is the Berserker-class Servant of Illyasviel von Einzbern during the Fifth Holy Grail War.

His actual name is Heracles, the greatest hero of Greek mythology. A demigod, the son of Zeus and a mortal woman, he was plagued by rage all his life despite his exceptional skills. He became a great hero, but Hera, jealous of her husband's infidelity, inflicted Heracles with madness, which led him to murder his own family. Troubled with his sins, he took on his legendary Twelve Labors to atone for them. He was gifted with immortality after he completed them all. After his eventual death, he ascended to Olympus as a god.

Powers and Abilities: Superhuman Physical Characteristics, Master Swordsman and Hand-to-Hand Combatant, Rage Power and Berserk Mode, Precognition (Has an innate sixth sense that allows him to sense and avoid danger in combat), Invulnerability (His skin is a conceptual defense that nullifies all but the highest-ranked attacks, rendering sheer power irrelevant), Reactive Evolution (Grows resistant to anything that injures him), Can temporarily fight on even with lethal injuries (Kept on fighting briefly after being killed time and time again by the Gate of Babylon and even after an eighth of his body was destroyed by Shirou's Nine Lives), Immortality (Types 3 and 4), Regeneration (Mid-Low normally; can heal any non-fatal wounds within minutes, Low-Mid over time; Servants can continue fighting even with a hole through their gut, and can regenerate unless their head/heart are destroyed, or they run out of mana. Mid with God Hand; regenerated and kept on going even after Fragarach crushed his brain), Resurrection (Has a stock of eleven extra lives), Supernatural Luck, Minor Fate Manipulation (Servants with B-rank Luck or higher can change their fates to evade inevitable outcomes such as having their hearts destroyed by Gáe Bolg) and Servant Physiology

Attack Potency: Island level (Deflected a weakened Excalibur, Archer's Caladbolg II after intercepting it mid-flight, and numerous high-rank weapons from the Gate of Babylon that were powerful enough to kill him. Has A+-Rank Strength, which should put him above the likes of Gawain), Small Country level with Nine Lives (As an A+ Ranked Noble Phantasm, it should be comparable to Siegfried's A+ Ranked Noble Phantasm)

Durability: Island level (Saber's blows bounce off his skin harmlessly, as do lower-rank treasures from the Gate of Babylon, and God Hand negates any attacks below A-rank, making even Noble Phantasms such as The Soaring Spear that Strikes with Death useless. He was unharmed by the indirect impact of Caladbolg II, an A-rank Broken Phantasm, after his sword knocked it down mid-flight). Due to his reactive evolution and resurrection, he is challenging to kill, often needing twelve different methods to put him down permanently.

Stamina: Very high (Was able to continue fighting against Gilgamesh's Gate of Babylon barrages in Unlimited Blade Works, even when losing all of his lives. He kept on fighting against Saber Alter while being consumed by the Shadow, and later in his battle against Shirou after the latter took off an eighth of his body in Heaven's Feel).

Intelligence: Berserker is almost entirely insane, reckless, and has little regard for his own safety thanks to God Hand. However, despite his madness, he still retains some of his combat skills; he competitively fought Saber and her magical sword. Later, he was also capable of repelling several of Gilgamesh's weapons from the Gate of Babylon to protect himself and Illya. He also used Pankration (a Greek martial art, basically a combination of wrestling and boxing) when his Axe Sword was restrained. Due to his Eye of the Mind (False) skill, he is also unhindered by visual obstructions. He can effortlessly follow Saber's invisible sword, showing that his battle instincts are still ingrained within him. Also, he's highly protective of Illya. He will go to any length to protect her, managing to accomplish feats like snapping Enkidu to reach Gilgamesh and save her.

Weaknesses: Berserker is insane and protects Illya at any cost. Sufficiently powerful attacks can take off multiple lives at once, potentially even killing him twelve times over instantly.

God Hand: Twelve Labors: A hidden ability of Berserker's, a blessing (and yet also a curse) from the gods that grants immortality, bestowed upon him after he completed the Twelve Labors that gave him a body so durable virtually nobody in the Age of Gods could scratch him unless it was of the highest grade. It is a continuously-active Noble Phantasm that converts his skin into armor that is likened to a Conceptual Weapon, a conceptual defense that nullifies all attacks below A-rank. On top of this, it grants him automatic regeneration that allows him to recover from anything that manages to hurt him. He has a stock of eleven extra lives, allowing him to resurrect after lethal injuries, so he has to be killed twelve times to put him down permanently. These additional lives slowly replenish themselves over time. To make things even more complicated, whenever an attack injures him, he becomes resistant to it once he heals, rendering even a Noble Phantasm useless after it draws his blood once. Therefore, to kill him permanently, one must have twelve different methods or be strong enough to take multiple lives at once.

Nine Lives: Shooting the Hundred Heads: Heracles' greatest Noble Phantasm, the combat technique he devised and used to slay the Hydra in life. It is a technique that "exterminates no matter how many times his opponent resurrects." Used initially with his bow, he could emulate it with other weapons, allowing him to use it in any form, depending on the circumstances. It can be delivered with any instrument he has on hand, displaying power on a Noble Phantasm level regardless of the specifics. It can demonstrate a scope ranging from Anti-Unit to even Anti-Fortress. No matter what, it is, at its essence, a high-speed attack consisting of nine, near-simultaneous consecutive strikes. Under the Fuyuki system, due to being summoned as a Berserker, he cannot utilize this Noble Phantasm. But under the FATE system of Chaldea, he can use it without issue.

Mad Enhancement: The source of the Berserker class's power, raising their statistics in exchange for a loss of sanity. It can seal away certain fighting techniques, individual skills, or even Noble Phantasms in some cases. Usually, only weak Servants get summoned as Berserkers, but the Einzberns summoned Heracles, one of the greatest heroes. Unfortunately, as a hero famous for his heroism and sense of justice, the traits were only a hindrance to Einzberns' pragmatism. At his rank of B, this means most of his reason has been lost. Thus he has lost access to several abilities, such as Bravery skill and his greatest Noble Phantasm, Nine Lives. Even with these setbacks, it still boosts physical characteristics significantly, comparable to his Bravery enhancement.

Battle Continuation: A skill that reflects one's exceptional vitality and endurance, allowing the user to fight on despite grievous wounds and escape safely even when defeated. Berserker has an A-rank in this skill, allowing him to continue fighting despite suffering mortal injuries. He remained alive to briefly fight even after receiving gruesome wounds such as having an eighth of his body destroyed at once or having all of his lives taken off by the Gate of Babylon.

Bravery: An ability that negates mental interference and increases physical capabilities. Due to Heracles' brave and daring spirit, he gains an A+ rank in this skill. It allows him to neutralize mind interference such as pressure, confusion, fascination, and charms and kill several monsters empty-handed. However, Mad Enhancement's influence sealed this ability.

Divinity: The measure of one's Divine Spirit aptitude, reflected in high ranks by the user becoming part Divine Spirit. At A-rank, it is an indicator of one who has reached godhood. Additionally, it possesses another effect that allows one to reduce "Anti-Purge defense" in proportion to the rank of their Divinity, allowing them to break through defensive abilities such as Protection of the Faith and Saver's Enlightenment of the Sacred Fig. As the most famous son of Zeus, who ascended from a demigod to become a full god himself after his death, Heracles has A-rank Divinity.

Eye of the Mind (False): Berserker has the natural ability to avoid danger based on an innate sixth sense refined through combat experience, a gift he gained through his many adventures and ordeals in his legend. Despite his loss of sanity, this ability remains intact as it is just an instinct. He can also disregard visual obstructions such as Invisible Air, battling as if it were not there and expertly blocking Saber's invisible blade.

Note: Due to its unusual mechanics, it is challenging to apply God Hand's attack negating effects to other attacks in versus threads, as there is no way to judge the "rank" of attacks outside the Nasuverse. 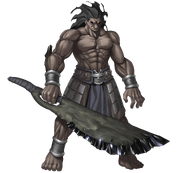