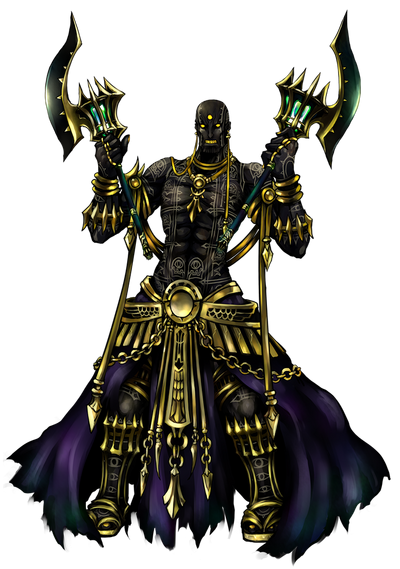 Berserker's True Name is Darius III. The last emperor of Achaemenid Dynasty, he was a valorous king that Alexandar the Great considers a "worthy rival", with their armies clashing numerous times before Darius' eventual defeat.

Age: 50 at time of death of his real-life counterpart

Powers and Abilities: Superhuman Physical Characteristics, Fire Manipulation (Is depicted with green fire around his axes and mount), Berserk Mode and Rage Power, Summoning and Necromancy via Athanaton Ten Thousand, Can easily break away from combat if needed, Can continue fighting for as long as he does not receive a decisive blow, Can amass a great deal of wealth without effort and Servant Physiology

Attack Potency: Island level (Has A-Rank Strength, making him comparable to Saber and Heracles. Has fought Iskander and his army with his own several times in life, and fought him again when both became Servants. Encountered the Chaldea Servants and Nero in Septem but was eventually defeated. Fought Santa Alter in the first Christmas event)

Speed: Massively Hypersonic (Boasts B-rank agility and thus should be comparable to most other Servants, such as Gilgamesh, who is on par with Enkidu)

Lifting Strength: Class 25 (Should be comparable to Saber at her peak, who is able to flip a trailer truck)

Durability: Island level (Has A+ Rank Durability, making him superior to Heracles)

Stamina: Virtually limitless for as long as he has sufficient mana

Intelligence: In life, Darius III was a valorous king that even the mighty Iskandar considered a worthy rival, to the point that Darius' armies managed to meet the King of Conquerors' numerous times. Despite having lost most of his sanity due to his Mad Enhancement, he retains his ability to wield his axes proficiently enough to pose a threat to other Servants and lead his elite Athanaton troops against his foes reasonably well.

Weaknesses: Darius is almost completely insane due to Mad Enhancement, He cannot attack while in Spirit Form

Athanaton Ten Thousand: Immortal Ten Thousand Soldiers: Darius' Noble Phantasm, in which he summons the elite ten thousand Athanaton soldiers that served him in life to fight at his side. Existing as historical fact, later legends about them have emphasized their seemingly indestructible and immortal nature, turning them into skeletal soldiers with a hive mind described as a single "war elephant of death" or a "colonial organism" to overwhelm foes with a massive and sudden display of force.