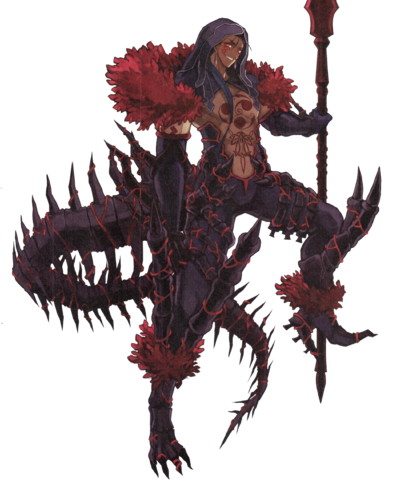 Berserker is an altered Servant summoned by Medb in E Pluribus Unum, the Fifth Singularity, using the Holy Grail to summon Cú Chulainn in a form perfect for her.

As Cú Chulainn Alter, he has changed greatly, becoming a monstrous Mad King devoted to devouring and destroying the land of America and leaving nothing remaining. It does not even reflect his berserk form in life, instead twisting him into a monstrous form that more reflects the sea monster Curruid, from which Gáe Bolg was carved.

Tier: Low 7-B, higher with Curruid Coinchenn, 6-A with Gáe Bolg

Powers and Abilities: Superhuman Physical Characteristics, Enhanced Senses, Master Spearman and Combatant, Rage Power and Berserk Mode, Rune Magic (Allows for Forcefield Creation, Elemental Manipulation, Healing, Clairvoyance, Magic Resistance, and temporary boosts to his Noble Phantasms and parameters), Can easily predict the paths of incoming projectiles, can temporarily fight on even with lethal injuries, Regeneration (Mid-Low normally. At least High-Low with Runes; heals through an instantaneous application of Rune Magic, allowing him to regenerate from having his body breaking apart when using Gouging Piercing Spear of Carnage and from the major injuries received from Karna's heavily weakened Vasavi Shakti. Low-Mid over time, without Runes; Servants are able to continue fighting even with a hole through their gut, and can regenerate unless their head/heart are destroyed, or they run out of mana), Summoning, Mind Manipulation and Statistics Reduction with Fairies Maddening (Summons fairies and other spirits of the Earth, and crushes his opponent's spirits in addition to temporarily lowering their strength and agility statistics), Regeneration Negation with Gáe Bolg, the Gouging Piercing Spear of Carnage homes in on targets and has a chance of Inducing Death and Servant Physiology

Attack Potency: Small City level (Easily overpowered and defeated Rama, a Servant said to be on par with Karna even while summoned in a weaker form. Implied to be superior to Scáthach. Can fight Chaldea's Servants, who called him "possibly the strongest Lancer"), Small City level+ with Curruid Coinchenn (It increases Cú's Strength to EX. Easily disemboweled and incapacitated Scáthach in their fight, resulting in him destroying 90% of her organs), Continent level with Gáe Bolg (Mash, who barely blocked a held back Brahmastra from Karna, wasn't sure if she could block a thrown Gáe Bolg with Lord Chaldeas, and Merlin felt it was necessary to step in).

Speed: Massively Hypersonic (His A+ rank Agility, making him faster than even his normal self, and superior in speed to Saber)

Lifting Strength: Class 25 (Comparable to Heracles and Saber, the latter of which flipped a truck with the side of her blade)

Stamina: Very high. His normal self was able to fight against Gilgamesh for half a day, and his high-rank Battle Continuation allows him to keep on fighting when badly injured.

Range: Extended melee range, Tens of Kilometers by throwing Gáe Bolg (His throwing range is even greater than his normal self's, who can throw Gáe Bolg forty kilometers)

Intelligence: Despite being a Berserker, Cú Chulainn Alter has retained most of his reason, allowing him to perform complex techniques and attacks that even Scáthach was unaware of. He is ruthless in combat, mercilessly impaling foes from behind and scouring the land as per Medb's wishes. He is a nihilist by nature, believing everything to be meaningless in the end, making him willing to damage his own body to end a target and seeing his own existence as a mere tool for his Master.

Weaknesses: Using Curruid Coinchenn seals the use of Gáe Bolg. He cannot fight in spirit form.

Curruid Coinchenn: Beast of Crunching Deathtusk: Cú Alter's unique Noble Phantasm, which manifests the rest of Curruid's skeleton from his wrath to wear it as armor. It is an offensive armor that raises his Strength to EX-rank and boosts his Endurance as well, but prohibits the use of Gáe Bolg for as long as he wears it. Its claws also seem to bear Gáe Bolg's legendary effects, skewering his opponent with countless barbs when he wounds them, ripping them apart from the inside out and inhibiting their regeneration.

Gáe Bolg: Gouging Piercing Spear of Carnage: Cú Alter's variant of Gáe Bolg, possessing the same build and basic function as the original. Carved from the remains of the beast Curruid's skull, it inhibits regeneration, making it difficult to heal from wounds it inflicts. Although one can save themselves through external means of healing, the wound will not heal completely until Cú Alter's death or by transferring the curse to another. Cú Alter can release its true name to utilize it as his normal self utilizes the Soaring Spear, hurling the spear with such power that it badly damages his own body while gaining strength and range. Like the Soaring Spear, it homes in on his target and splits into countless spearheads to cause destruction and death on a great scale, inflicting instant death on others. Those who manage to survive this effect through sheer luck are instead skewered from the inside out with countless barbs that pierce all of one's internal organs. The damage to Cú Alter's body is instantly healed with Rune Magic, but it still causes him intense pain.

Mad Enhancement: The source of the Berserker class's power, raising their statistics in exchange for a loss of sanity. Due to the nature of his summoning, Cú Alter has an EX-ranked Mad Enhancement, allowing him to converse normally and think logically despite his class. However, it is impossible for him to hold any meaningful conversation with his opponents. In addition, his true rank of C can show, boosting all his parameters except mana and luck at the cost of his pride and self-control.

Battle Continuation: A skill that reflects one's exceptional vitality and endurance, allowing the user to fight on despite grievous wounds and escape safely even when defeated. Cú Alter is a mad beast that never gives up, fighting on to the very end, even if he is lethally injured, dying only when he receives a final, decisive blow. This is further supplemented by his regenerative capabilities, which make it extremely difficult to inflict any lasting harm.

Divinity: The measure of one's Divine Spirit aptitude, reflected in high ranks by the user becoming part Divine Spirit. At A-rank, it is even an indicator as one who has reached the Throne of Gods. Additionally, it possesses another effect that allows one to reduce "Anti-Purge defense" in proportion to the rank of their Divinity, allowing them to break through defensive abilities such as Protection of the Faith and Saver's Enlightenment of the Sacred Fig. As the son of the God of Light, Lugh, Cú Alter would normally have a high rank of B, but his altered state has ranked it down to C.

Fairies Maddening: The roar of Cú Alter that functions as a type of mental interference. It awakens the spirits and fairies hiding within the Earth, and crushes his opponent's spirit and temporarily lowers their strength and agility parameters.

Protection from Arrows: An ability that Cú Chulainn was born with, that allows him to deal with ranged attacks by predicting the projectiles' trajectories. As long as the shooter is within his line of sight, he can track down their projectiles and defend against them. However, it offers no protection against attacks with a great area-of-effect, or weapons that simply have a long reach. In addition due to his Mad Enhancement, this skill is ranked down to C, so he cannot track projectiles enhanced by magecraft and has to follow them with his eyes.

Rune Magic: A skill that measures one's knowledge of this type of Northern European Magecraft. Like his normal self, Cú Alter has mastered the original eighteen Norse Runes, which would give him A-Rank proficiency as Caster, but is downgraded to B-Rank proficiency in this distorted, altered state. Some of the known uses of Rune Magic include:

Retrieved from "https://vsbattles.fandom.com/wiki/Berserker_(Cú_Alter)?oldid=6998302"
Community content is available under CC-BY-SA unless otherwise noted.