VS Battles Wiki
Register
Don't have an account?
Sign In
Advertisement
in: Tier 6, Tier 6-C, Characters,
and 28 more 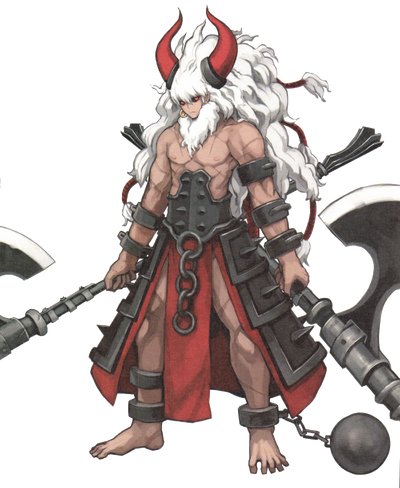 Berserker is a Berserker-class Servant able to be summoned by Ritsuka Fujimaru in the Grand Orders of Fate/Grand Order, first appearing as a wandering Servant in the third Singularity Okeanos.

Berserker's True Name is Asterios, but he is more widely known by his alias as the "bull of King Minos," Minotauros. Although bestowed with the "name of lightning", he was almost never called by his real name, but rather by the name of the monster that spread throughout the world. He was a monster who possessed the body of a man and the head of an ox, born from Pasiphae, wife of King Minos, and a bull. Minos, who ruled over the island of Crete, was greatly perplexed on how to deal with the offspring, deciding to order the famous artisan Daedalus to build a "maze that one cannot get out from" to hold him. This order resulted in the Labyrinth, where Asterios was eventually slain by the hero Theseus after he sneaked into the Labyrinth. Indeed; even if his essence was not wicked since his deeds were evil, his fate was to be brought down. However, Theseus did not see Asterios as a monster.

Attack Potency: Island level (Wrestled with Heracles and was his superior in terms of raw strength)

Speed: Massively Hypersonic (Wrestled with the likes of Heracles on relatively even ground)

Durability: Island level (Has Rank A++ Durability, making him superior to the likes of Heracles, but was eventually damaged by him after an intense fight due to the latters experience in fighting beings as strong as him, and later withstood Hector's Durindana Pilum, surviving it even after it pierced through his and Heracles' body)

Intelligence: Despite his monstrous nature and having a relatively high rank in Mad Enhancement, Asterios is a surprisingly docile and intelligent for a Berserker, being able to comprehend his Master's orders while also speaking with a limited amount of coherency. He has also memorized his labyrinth so thoroughly that he can chart a complete map from memory alone along with the routes and locations of any of the other monsters that prowled its depths. In battle, Asterios is as reckless as his class implies, but will put the safety of those who have befriended him first, going so far as to wrestle with the mighty Heracles before dragging him into the water along with Hector's Durindana to prevent them from chasing the protagonist.

Weaknesses: Can't attack while in Spirit Form. Lost most of his sanity due to being in the Berserker Class.

Chaos Labyrinthos: Eternally Unchanging Labyrinth: Asterios' Noble Phantasm, it is the famous Labyrinth of myth built by Daedalus under the orders of King Minos and Asterios' home for his entire life. Simply by remembering "The place where he used to live", Asterios can erect a replication of the maze in a display of High-Thamuaturgy approaching a Reality Marble in complexity. However, unlike a Reality Marble which imposes the user's internal world on the environment around them, Chaos Labyrinth is instead formed on the underside of The World, likely within a lower layer. This maze is incredibly difficult to escape, becoming more and more confusing as the concept of a labyrinth grows in fame. This Labyrinth will not disappear until Asterios or all of his foes die, and he can erect another one should his first somehow disappear. However, once it is solved, the target(s) can potentially just walk out of it.

Mad Enhancement: is the Class Skill that characterizes a Berserker, raising basic parameters in exchange for hindering mental capacities. In some cases, it also affects and/or seals away some techniques, Personal Skills, and Noble Phantasms. At Rank B, it results in a rank up for all parameters, but takes away most of sanity.

Monstrous Strength: A Skill that permits the augmentation of its holder's Strength parameter by one rank for a time limit determined by the ranking of this Skill. This Skill is borne from the holder's nature as a monster or Demonic Beast.

Natural Monster: A Skill endowed to those who were given birth as a monster rather than to a hero or god that has fallen down to the level of a Magical Beast. With A++ Rank in this skill, Asterios has attained a Rank of STR and END that is absolutely impossible for a human body.

Avyssos of Labrys: The pair of giant axes Asterios owns. It's the symbol of the Labyrinth and the root of that very word. It was originally a two-bladed axe, but Asterios rearranged it into two axes.