VS Battles Wiki
Register
Don't have an account?
Sign In
Advertisement
in: Characters, Male Characters, Tier 7,
and 28 more 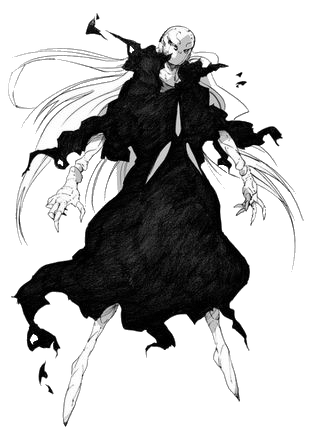 Beretta is a Greater Daemon summoned and named by Rimuru Tempest. They were tasked to become the servant of Ramiris and protector of the fairies of the Labyrinth within a hundred years, in exchange for a magic doll body and a name. They are a descendant of the Black Primordial and shares their progenitor's certain traits and eccentricities.

Superhuman Physical Characteristics, Automatic Translation (Magic Sense can translate languages automatically), Enhanced Senses and Extrasensory Perception (via Magic Sense. , Unholy Manipulation (Monsters are made of magicules, which can be purified or warded off by holy energy), Magic, Radiation Manipulation and Creation (Monsters of significant aura can create an aura akin to radiation, that is extremely toxic to organic life and can induce death in high concentration. It will cause monsters to be born due to the high concentration of magicules), Corruption (Type 2; Organic life that can somehow resist the toxic effects of the monster's aura can fall to its corruption and mutation effect turning them into monsters), Resurrection, Immortality (Types 1 and 3), Non-Physical Interaction (Magic is capable of harming spiritual lifeforms who have no physical body), Inorganic Physiology (Type 1, Beretta's body is constructed out of magisteel), Elemental Manipulation, Self-Sustenance (All Types. As a Doll and daemon, Beretta likely does not need any respiration, nutrition or sleep)

Unconventional Resistance to Power Nullification, Power Modification, Power Absorption and Power Mimicry (Skills are inscribed into the soul which resists any outside interference unless the interference is stronger than the soul's defenses), Unconventional  Resistance to Mind Manipulation (The source of consciousness, memories and mind itself is the Soul, Astral body and Spiritual Body.[1]), Resistance to Magic, Pain Manipulation, Information Manipulation (Magic Senses overloads the brain with so much information it would have killed a normal human, but can be used casually) and Data Manipulation (The information from Magic Sense is turned into data, which overloads the human brain, but can be used casually), Radiation Manipulation and Death Manipulation (Can resist Veldora's aura which causes the death of humans), Corruption (Type 2; can resist the effect monster's magical aura that can turn organic life into monsters)

Same as before plus Holy Manipulation

Lifting Strength: Class 5 (Comparable to other majins who can lift several tons) | Class 5

Stamina: High (Demons do not require rest of any kind or sustenance. Their existence is perpetuated by magical energy)

Range: Standard Melee Range, Tens of Meters with other abilities.

Intelligence: Above Average, likely Gifted in Magic and combat. Beretta is a Greater Demon who must have lived for a long time, training them abilities and exploring magic. As the servant of Ramiris, they partakes in their research which involves complicated subjects similar to the functionally using the Elemental Colossus, a project that the Dwarves weren't able to successfully complete.

Weaknesses: As a Daemon, Beretta is highly susceptible to Holy Magic. A daemon will eventually dissipate and return to the spiritual world if their physical body is destroyed | Same as before, without the weakness against Holy Magic. 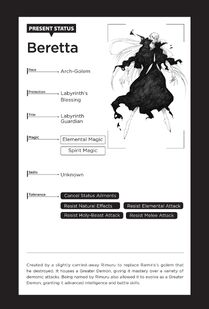