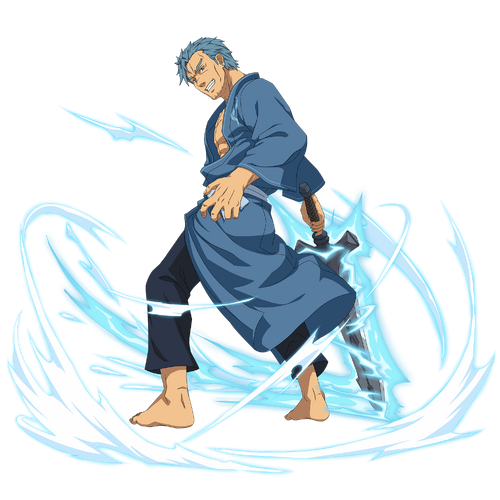 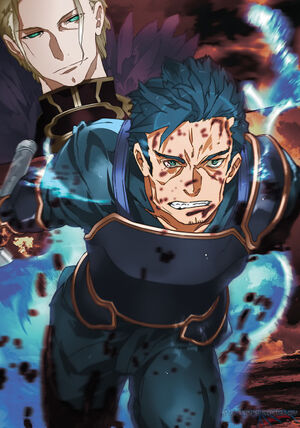 Bercouli (ベルクーリ, Berukūri), also known as Bercouli Synthesis One (ベルクーリ・シンセシス・ワン, Berukūri Shinseshisu Wan), was a supporting character in the Alicization Arc. He was one of the founders of Rulid Village, as well as the leader of the Integrity Knights; the oldest one in existence. A battle-hardened warrior and leader, Bercouli lived for hundreds of years, being seen as nearly unbeatable by the enemies who live to tell the tale. His weapon of choice was the Time Piercing Sword, a blade that could cut through time itself.

Age: Around 40 physically, around 300 mentally

Powers and Abilities: Superhuman Physical Characteristics, Immortality (Type 1; All Integrity Knights do not age due to their lifespan being frozen by Quinella), Statistics Amplification (Sword skills amplify the user's speed and power, with the downside of leaving some aftercast delay), Master Swordsman, Extrasensory Perception (Can sense whether or not someone is alive or dead, even if they are on the other side of the planet. Can spot individual people within an entire army. Can predict oncoming attacks through his sheer battle experience), Air Manipulation (Can generate air slashes. His Enhance Armament slashes go further than his normal slashing range because of this), Magic & Creation (via Sacred Arts. Can create a spell or an object for almost any situation, so long as he knows the words used to arrange his thoughts, guide his emotions, and fuel his imagination to create said spell or object), Regeneration (Low-Mid. Can regenerate his entire arm via Sacred Arts without an incantation), Limited Reality Warping (via Incarnation. Allows the user to change the world to an extent via their willpower or imagination. For those who are not conscious or adept with this ability, it is primarily used to increase the chances of winning a fight against stronger opponents or create miracles not possible with standard Sacred Arts. Bercouli, through hundreds of years of experience fighting, has enough experience and recognition of Incarnation to use its probability manipulation at will), Can create invisible swords (via Incarnate Blades), Telekinesis (via Incarnate Arms), Superhuman Willpower (Even when the odds were against him, fighting a God who was leagues above him and suffering an immense amount of pain, Bercouli still continued to fight. Even though Dark God Vecta's primary ability was to absorb the Incarnation of his opponent— their literal willpower as well as their soul, Bercouli still stood tall and continued to fight this uphill battle, eventually winning in the end), Time Manipulation (via the Time Piercing Sword. Can attack the past and the future. Attacking the future allows Bercouli to store the power behind a slash in a specific area, meaning the slash would remain in the trajectory where the sword was swung, and anyone who touches that area will be cut. In contrast, attacking the past will always hit the opponent instead of remaining in an area. The user could only attack 10 minutes into the past), Durability Negation (via the Time Piercing Sword. Upon slashing the past, the opponent's life will instantly drop to 0 due to directly interfering with the system), Resistance to Soul Manipulation (Resisted Vecta's ability to absorb Incarnation and the souls of his enemies through sheer willpower)

Attack Potency: At least Building level+ (Should be comparable to Alice and is superior to other Integrity Knights. Fought Eugeo very casually. His left-over slashes from his Enhance Armament completely shattered parts of Eugeo's own Enhance Armament. Casually stopped Alice and Stacia from fighting with his bare hands), possibly far higher (Stated that he has defeated all previous Integrity Knights in battle before, even though most of them use ranged attacks and destructive Armament Full Control Arts that are Multi-City Block level. Slain the Northern White Dragon, a dragon whose role was to protect the entirety of the Human Empire from the Dark Territory. Even weaker dragons such as Amayori can torch entire villages and forests). Release Recollection ignores conventional durability by instantly dropping the opponent's life to 0.

Speed: Unknown (Comparable to other Integrity Knights and Eugeo)

Lifting Strength: Likely Superhuman (Should be comparable to, if not superior to Eugeo)

Durability: At least Building level+, possibly far higher (Was merely immobilised from Eugeo's Release Recollection and would have eventually broken free if not for the blue roses sapping his Life. Took attacks from Dark God Vecta)

Stamina: Vastly Superhuman (Should be comparable to Kirito's own willpower. Fought through immense pain and an uphill battle against Dark God Vecta, an opponent who could absorb an opponent's own willpower and soul)

Intelligence: Bercouli has around 300 years of fighting experience and is said to be a legend within the Underworld, even to those in the Dark Territory. With his immense battle experience, he was able to barely defeat Dark God Vecta; an opponent who is comparable to the Goddess Stacia and Kirito when powered by the world. He is a person with an impressive level of concentration, yet also relaxed even in intense situations, as he was able to maintain focus on his «Armament Full Control Art» even while leisurely conversing with Eugeo. Although Bercouli was the commander of the Integrity Knights and had his memories of his previous life suppressed, he maintained his critical thinking, as he held faint distrust against the instructions handed down by the Chamber of Elders, but nonetheless continued fighting on the church's side due to his wish for peace, and knowing peace would be impossible without the Axiom Church.

Weaknesses: Is extremely self-confident and prideful, which makes him not use Release Recollection most of the time. Can only attack the past for up to 10 minutes back and keeping various future slashes up for a long period of time requires immense concentration. Is susceptible to Quinella's whims with the Seal of the Right Eye, though after her death this weakness becomes a non-factor. Sword Skills have a slight aftercast delay at the end of them in exchange for increased power. Most of the time, to activate Sacred Arts the user must chant out the words required to activate it, however for Bercouli most Sacred Arts do not need a chant for him, making this weakness negligible. Sacred Arts require "spatial resources" to use, meaning that barren environments would lessen the effects of a Sacred Art. If Bercouli loses willpower, confidence, or imagination on succeeding in an event, Incarnation will not activate.

Incarnation: A secret skill passed down by Integrity Knights since ancient times, and one of the most important concepts in the Sword Art Online franchise. Incarnation refers to the ability to change the state of the world through pure willpower and imagination. This mainly includes creation, alteration, and destruction. It is the power which Sacred Arts derive from. Its effects are versatile, as the power has been used to wield invisible blades, create swords from the user's blood, transmute objects, increase the chances of an event happening, and much more. However, the power of an Incarnation ability can be matched by another Incarnation ability, and the use of Incarnation is mentally exhausting, requiring a lot of concentration and energy to perform. If the user is in a state where their will is not strong enough, they become unable to use Incarnation. There are a limited amount of people who can use Incarnation to its full potential, and much practice and experience are needed to be able to use it. This ability is most prominent in the Underworld, as this ability is one of that world's core mechanics. However this ability has also been shown multiple times throughout the series before the Alicization arc.