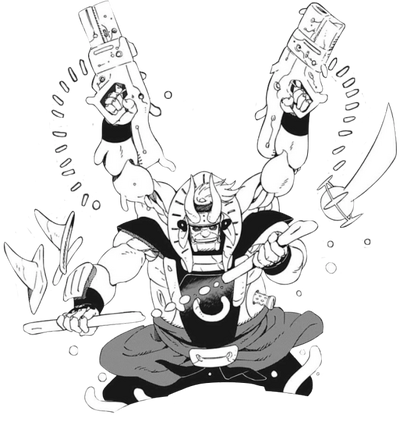 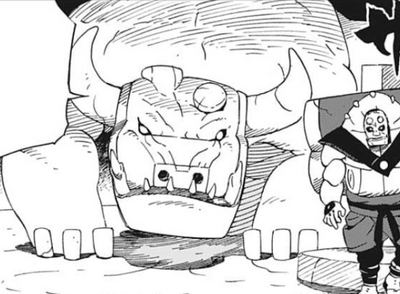 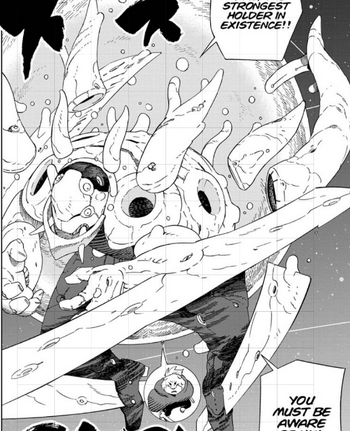 Benkei, also known as the infamous Ben the Key Hunter, is a Samurai criminal traversing the galaxy. Originally a Gozanze-Style Samurai, he went rogue and became infamous for hunting Samurai and collecting their Keys alongside his Ox-Holder, Ushiwakamaru. He is a former follower of Yoshitsune, who tricked him into death and stole his giant holder, the Oniwakamaru.

Superhuman Physical Characteristics, Weapon Mastery, Longevity, Inorganic Physiology (Samurai are robots thus do not have a normal body or organs), Limited Matter Manipulation and Body Control (Samurai can manipulate their body or their holder's body's sub-atomic particles to form it into different shapes, tools and devices), Technology Manipulation (Samurai can manipulate and create technology using their body), Statistics Amplification (With their holder armour and giant holder armour samurai increase their power and durability to the point that they can onehsot their peers), Electricity Manipulation, Flight, Hacking, Regeneration (High-Mid), Immortality (Types 1, 3, 7 and 8 dependent on the God Acala and their courage to continue fighting), Limited Telekinesis (Can telekinetically control his swords), Durability Negation (With samurai soul sword which cuts at the subatomic level), limited Extrasensory Perception (Can see people any where on a planet he is surveying), Self-Sustenance (Type 1) and Mind Reading (Samurai are capable of searching people's memories), Limited Invisibility and Forcefield Creation (Can create a barrier that can steath an entire planet)

Stamina: Very High, fought Daruma and had a large part of his body destroyed by soroken, then he fought the team alpha and beta in a fight without showing any signs of tiredness.

Intelligence: High, tricked a high tier samurai into killing himself.

Weaknesses: Regenerating his entire body can take potentially hours, but regeneration speed varies among Samurai and less damaging injuries can be healed much quicker. Benkei doesn't have a princess, so he shouldn't be able to unlock his true potential.

Key Integration: Even though he is a Samurai, Benkei has a very weak key which could not download any fighting style. To compensate, Benkei stole the keys of stronger Samurai and connected them to his own, storing the bound keys in a pack attached to his back. Because he has stolen keys from practitioners of the Kongo-Yasha, Daiitoku, Gozanze, and Gundari Styles, he can use moves from all four styles.