VS Battles Wiki
Register
Don't have an account?
Sign In
in: Characters, Male Characters, Internet Characters,
and 49 more 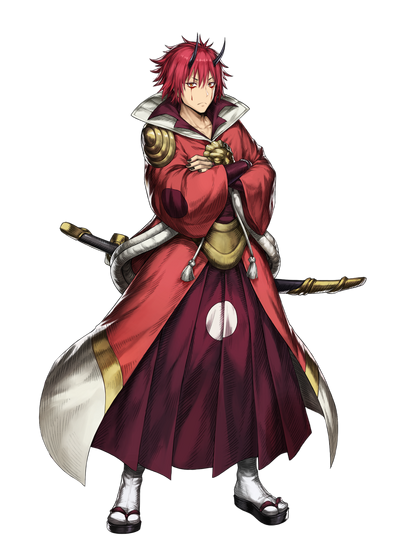 Benimaru is a loyal follower of Rimuru Tempest and the Commander-in-Chief of Tempest's army. He is one of Rimuru's Twelve Executives and also one of his three strongest subordinates, including Diablo and Zegion.

Powers and Abilities: Superhuman Physical Characteristics, Automatic Translation, Enhanced Senses, Extrasensory Perception, Fire Manipulation, Telepathy, Magic, Hellfire Manipulation, Lightning Manipulation, Blessed, Regeneration Negation (Up to High-Mid, can use black flame. Black flame can stop the Gerudo's regeneration), Unholy Manipulation (Monsters are made of magic energy, which can be purified or warded off by holy energy), Radiation Manipulation and Creation (Monsters of significant aura can create an aura akin to radiation, that is extremely toxic to organic life and can induce death in high concentration. It will cause monsters to be born due to the high concentration of magic energy), Corruption (Type 2; Organic life that can somehow resist the toxic effects of the monster's aura can fall to its corruption and mutation effect turning them into monsters), Unconventional Resistance to Power Nullification, Power Modification, Power Absorption and Power Mimicry (Skills are inscribed into the soul which resists any outside interference unless the interference is stronger than the soul's defenses, furthermore Unique Skills and above require a strong soul to possess them), Resistance to Law Manipulation (As a powerful A rank Disaster monster like Apito, he should be able to resist the effect of Holy Barrier which affects the laws of the world), Memory Manipulation (Individuals surpassing A rank have high resistances, and their memories are protected by their soul), Magic (All monsters have inherent resistance to the magic attribute), Radiation Manipulation, Corruption (Type 2; can resist the effect monster's magical aura that can turn organic life into monsters), Information Manipulation (Magic Perception overloads the brain with so much information it would have killed a normal human, but can be used casually), and Data Manipulation (The information from Magic Perception is turned into data, which overloads the human brain, but can be used casually)

Powers and Abilities: Same as before

Attack Potency: City level (Comparable to Rimuru) | City level (Far stronger than before) | Continent level (Comparable to Diablo) | Large Star level (Rimuru estimated on one occasion that 3 Guardians on the level of Diablo could handle Milim, and on another occasion that those 3 had a chance of defeating Chloe. So while inferior to Milim and Chloe, Benimaru is somewhat comparable)

Speed: Subsonic (Superior to the direwolf boss who moved faster than the goblins could see. His hellflare is stated to be faster than a hurricane) | Hypersonic+ with Relativistic reaction speed (Comparable to Shion) | Relativistic+ (Comparable to Diablo) | FTL (Comparable to Chloe) with Massively FTL+ reaction speed (Because of Thought acceleration his thought processing capability is accelerated by a million to ten million times, which allows him to react to things he normally wouldn't be able to perceive), and Massively FTL+ in Stopped Time (Can move a 1 million times normal speed while in stopped time).