VS Battles Wiki
Register
Don't have an account?
Sign In
Advertisement
in: Characters, Female Characters, A Wild Last Boss Appeared,
and 36 more 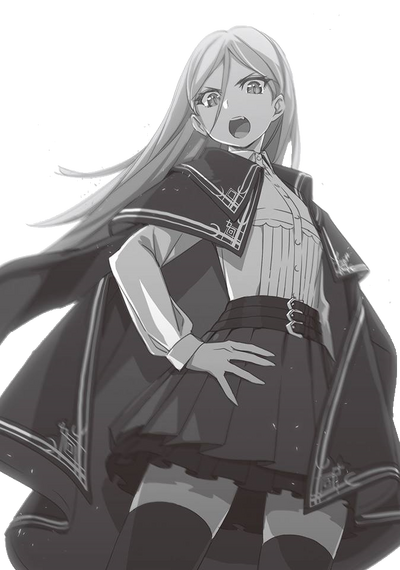 Benetnash is the Vampire Princess and founder of the Kingdom of Mjolnir. She is one of the final surviving member of the Seven Heroes as well as being their strongest member as she was not cursed by the Demon King. She considers her rival to be Ruphas and is overjoyed at the chance to fight her once more and have a conclusive ending to their relationship.

Superhuman Physical Characteristics, Aura, Magic, Information Analysis (Can see her opponents level, remaining HP, and their stats), Enhanced Senses, Immortality (Type 1[1]), Necromancy, Photographic Memory, Transmutation (Her mana can mutate living creatures who come into contact with it), Extrasensory Perception (Can sense mana[2]), Flight, Statistics Amplification (Can increase her status[3]), Regeneration (Low-Mid[3]), Fear Manipulation (Similar to a flugel, Benetnash can give off an intimidating aura that can cause low-leveled people to not even be able to remain standing[3]), Darkness Manipulation (The kingdom of the vampires is constant dark due to Benetnash’s arcane magic[4]), Probability Manipulation (Has a 100% chance of evasion), Absorption (Can absorb her enemies HP[5]), Creation (Arcane magic is the power to create what doesn't exist), Resistance to Willpower Manipulation, Fear Manipulation (Can resist Ruphas Coercion), Telekinesis (Unaffected by Ruphas telekinesis[3]), Genius Intelligence, Statistics Reduction (Should be able to resist the Demon King's aura that reduces attack power), Paralysis Inducement (Can resist her movements being sealed[6]), Mind Manipulation (Should be able to resist Orm's mental skills. Resisted the mind manipulation of the Goddess), Memory Manipulation (The Goddess can't manipulate her thoughts and memories[7]), Madness Manipulation (Type 2; Can resist Aigokeros madness manipulation that affected an entire country), Plot Manipulation (Like Ruphas, Benetnash similarly exists outside The Goddess scenario), Law Manipulation (Broke through the rules of the world created by the Goddess herself[5]), Possession (Like Ruphas whom the Goddess can't possess, Benetnash is outside her influence), Empathic Manipulation (The Goddess who can control emotions can't control her as Benetnash is outside her influence), Fate Manipulation (Similar to Ruphas who ignored her predetermined evolution path and transformed on her own. The Goddess who can guide fate, can't influence her), Heat Manipulation (Has no issue sitting on magma and had no problem swimming inside the planet's mantle[8]. High level individuals can withstand -100 degrees Celsius with no issues), Sleep Manipulation (Level 1000's have resistance to sleep magic), Perception Manipulation, and Time Manipulation (Like Ruphas, Dina also can't defeat Benetnash even if she uses her perception manipulation or time manipulation abilities)

All previous abilities on a higher scale plus Acausality (Type 5; Providence doesn't exist for deities and when a person becomes a deity, their human self completely vanishes from history, as if they never existed in the first place), Cosmic Awareness (Can observe entire universes), Black Hole Creation (Can create black holes[9]), Nigh-Omniscience (Like Alovenus, she is close to being omniscient), Law Manipulation, Fate Manipulation, Higher-Dimensional Manipulation, Conceptual Manipulation (Type 1; Within the realm of God concepts, laws, providence don't exist, they are things those who have reach the realm of God create on their own whim. God's paints their own "colors" on the blank white canvas that is the realm of God, which is outside the universe and contains all creation), Reactive Evolution and Plot Manipulation (Gods configure their settings according to there opponent, and thus will always be above them. As a result their strength, speed etc will transcend their opponnent, in addition to the abilities of their opponent not working)

Attack Potency: Small Planet level (Comparable to Ruphas Mafahl. Destroyed a small planet[10]) | Planet level (Can easily destroy Midgard[11]. Comparable to Level 1500 Ruphas. Level 1500's can deal more damage than a planet like Midgard can bear and shatter it, shatter a planet with a single kick and even a mere shockwave of full-strength arcane magic can shatter countless planets and can even cause cosmic-scale explosions. Can shatter planets, penetrate the planet and emerge on the other side[12].) | Hyperverse level (Exists on the same tier as Alovenus, albeit Alovenus is far more powerful), to Low Outerverse level (Battles on her level are just a matter of will, merely believing you are stronger, makes you so[13]. Like Ruphas and Alovenus, Benetnash adjusts her stats according to her opponent, and is capable of ascending to higher levels. Ruphas and Alovenus can rise to the peak of infinity, while Orm and Bentnash can only make it halfway to the peak)

Speed: Relativistic+ (Moves at almost the speed of light[5]. Can move at over mach 400,000[10]) | FTL (Dodged Ruphas attack which left the stratosphere and destroyed a distant planet) | Infinite (Infinitely faster than infinity)

Stamina: High (Comparable to Ruphas who fought the heroes for 1 day and night) | High | Infinite

Ruphas Mafahl (A Wild Last Boss Appeared) Ruphas' Profile (Both were Low 5-B, speed was equalized and the battle took place in the Fountain of Dreams)