VS Battles Wiki
Register
Don't have an account?
Sign In
Advertisement
in: Tier 9, Tier 9-B, Tier 5,
and 67 more 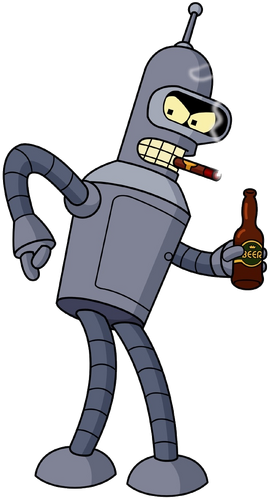 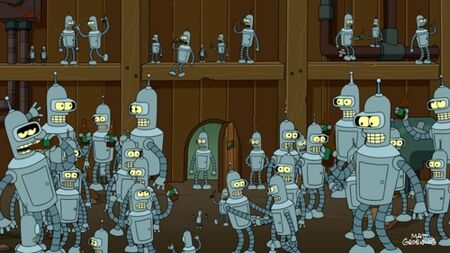 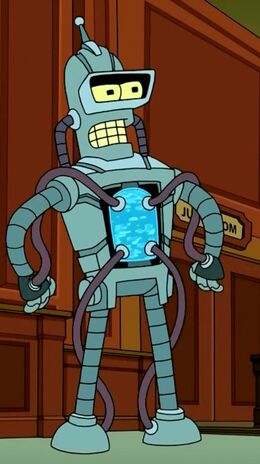 Bender Bending Rodriguez, simply known as Bender or Bending Unit 22, is one of the main characters of the animated comedy Futurama. Bender is for all intents and purposes not the best role model. He requires a lot of alcohol just to charge his Fuel Cells. Bender also enjoys puffing on cigars, consorting with Robot escorts, and does whatever validates his over-inflated ego. Bender does what he wants, when he wants.

Age: 17, although his time-travelling experiences technically make him 27,203 years old

Superhuman Physical Characteristics, Inorganic Physiology (Type 2), Self-Sustenance (Type 1 and Type 2), The ability to unattach parts of his body and reattach them at will or remotely control them, Information Analysis via Bender Vision, Can burp fire, Weapon Mastery, Can extend his limbs great distances, Basic Martial Arts (Bender goes to Karate practices with Fry, so he should know some basic H2H combat), Slight user of Toonforce, Duplication (Can create multiple smaller duplicates of himself with Banach-Tarski Dupla-Shrinker), Small Size (Ranging from Type 1 to Type 5: The bender clones can reach around the height of a toddler to even to the size of atoms) Self-Destruction (Has a self destruction unit back in "Bender's Big Score"), Light Manipulation, Acrobatics (Has shown to be acrobatic before), Time Travel (Can summon a time sphere to travel in time by reading the tattoo's code aloud as seen in "Bender's Big Score"), Size Manipulation (By combining multiple Benders to transform into "Big Bender"), Hammerspace (His Compartment of Mystery), Immortality (Types 1, 2, 3 and 7; Bender was able to survive getting brutally shot by prison guards and was fine soon after, if he gets dissembled he can just "Bender Assemble" himself if need to or can reattach himself in other various ways, and if he dies he becomes a ghost), Incorporeality and Invisibility (Since he can become a ghost), Hacking (Can possess multiple electronics), limited Animal Manipulation (Can talk to Giant, Space Bees and penguins), Energy Manipulation (With eye laser and laser show functions), Flight (via jetpack), Electricity Manipulation (Can charge his surface with electricity and then use his head to electrocute anyone), Matter Manipulation (His clones can turn water into alcohol and can turn a giant into gray dust on an atomic level) Water Manipulation (With a water boiler function), can walk on walls with suction cup feet, Transformation (Turned into a stroller to transport Maggie in Simpsorama), Sound Manipulation, Soul Removal (With a photo of Langdon Cobb, Bender can remove one's soul from their body if they look at it), Resistance to Soul Manipulation and Acid Manipulation (Took a bath in acid and didn't get affected by it), Resistance to Fire Manipulation (is incapable of getting burned) and Magma Manipulation (Has gone through the Earth's core multiple times in the series), Resistance to Electricity Manipulation (Electricity to him is like drugs to humans), Immune to Biological Manipulation, conventional Mind Manipulation, and Disease Manipulation (Was the only one not affected by the Common Cold), Breaking the Fourth Wall (He was able to flip through pages of his own comic book)

Same as before, but has Large Size (Type 2), Transmutation via Matter Manipulation (Just in a couple of seconds, the Bender clones turned a giant into dust [More Bender clones] just from the guy touching him alone)

Same as before, but with some new abilities, Precognition (Stated that he can see "50 moves ahead" and perceives everything as a chess game), Self-Sustenance (Type 1, 2, and 3), Creation (Casually created two galaxies just from burping alone), Omnipresence, Incorporeality (Is literally one with the universe), Large Size (Type 8), Matter Manipulation (Can create new heavy elements), Reality Warping (Change the setting of his surroundings once Fry discovered him in the falls), possibly Avatar Creation (able to make himself a physical form even though he became one with the universe), Fusionism and possibly Spatial Manipulation (Fused himself to the courthouse and space was bending around it as a result, same can be said when he became one with the universe)

Attack Potency: Wall level (Comparable to Zoidberg, has demonstrated very impressive feats such as punching through a powerful metal safe, push down walls of concrete, and bending "unbendable" girders) to Large Planet level via exhaust pipe (Was able to move the entire Earth away from a laser) | Large Town level (Said to have weighed about 7 billion tons and fought Giant Zoidberg which their battle caused destruction to large portions of New New York as a part of collateral damage) | At least Galaxy level to Multi-Galaxy level, likely Universe level (Whenever he burps one or two galaxies can be created. The entire universe became his processor and he perceives everything as a "Chess Game")

Lifting Strength: Class K (Can bend an unbendable girder, presumably made with the strongest known metals in the universe, spun an entire Ferris Wheel effortlessly and then broke it shortly after, and was able to push down an entire wall of concrete black) to Class Y (His exhaust pipe helped move the entire Earth) | Class G in his giant form | At least Galactic to Multi-Galactic, likely Universal

Durability: Wall level, possibly higher (Survived Professor Farnsworth's doomsday bomb detonating inside of him. Though he can be harmed by lesser things, Bender was still alive after the explosion and has been shown to survive deep-space lightning storms, and casually endures hard vacuum, he has also survived getting blasted by a dimensional rift) | Large Town level (His durability should be equal to his Attack Potency as it's calculated through his mass) | At least Galaxy level to Multi-Galaxy level, likely Universe level

Stamina: Extremely High (Was able to survive without alcohol for some days and was able to dance off for several days or a week in order to keep himself from blowing up and still was in the shape to party soon after, and he has survived without a body and alcohol for 1000 years) | Essentially limitless (Continuously runs on a high-powered water machine to keep himself water cooled and able to function without fatigue, is essentially a universe)

Range: Likely tens of meters. Tens of kilometers to Planetary With certain ray guns that can go through cities and maybe even planets | Universal

Intelligence: Genius (Admits to not being a great calculator, but is a robot who can quickly perform mathematical calculations. Also took over the Earth with an army of robots three times in the series easily, performs very elaborate crimes with varying degrees of success, quick-witted and can talk his way out of almost anything) | Nigh Omniscient

Weaknesses: Bender is negatively affected by high-power magnets and needs alcohol in order to function | None notable

Bubsy the Bobcat (Bubsy (Verse)) Bubsy's Profile (Overclocked Bender and Bubsy had the Virgil Reality Helmet, and speed was equalized)

Ultraman X (The Ultra Series) Ultraman's Profile (Both were 3-A, and speed was equalized)

GLaDOS (Portal) GLaDOS' Profile (Stock Bender and GLaDOS with explosives were used, and speed was equalized)

Kirby (Kirby Universe) Kirby's Profile (3-C Bender was used, speed was equalized, Both had access to their Optional Equipment)