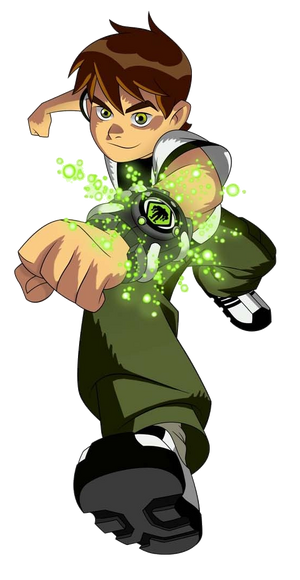 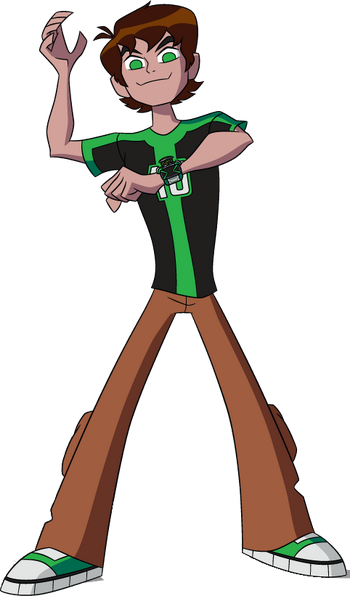 Benjamin "Ben" Kirby Tennyson was an ordinary 10-year old boy who looked forward to spending his summer vacation goofing off and playing video games. But his Grandpa Max had different ideas, taking Ben and his cousin Gwen out on a national road trip to see the nation's most famous and quirky sights. It would have been one boring summer if not for a strange shooting star that flew over the Tennyson's campsite. Intrigued, Ben followed the fallen object to its landing site, upon which he quickly found himself forcibly bonded to a strange "watch" that allowed him to transform into ten different alien "heroes". Now sucked into the world of supernatural and intergalactic threats, Ben quickly discovered that this summer was going to be anything but boring.

Classification: Human, Can change species with the Omnitrix

Transformation, Power Mimicry (The Omnitrix is able to record the DNA of any species its wielder has not encountered before, recording it and allowing the user to take the form of the newly recorded species), Biological Manipulation (Ben was able to use the DNA recorded in the Omnitrix to modify the Highbreeds' DNA and biological structures, instilling them with the traits of other species to remedy the genetic damage caused by their inbreeding), Self-Destruction (Can set the Omnitrix to self-destruct), Duplication (By transforming into Echo Echo and duplicating himself before changing back, Ben can create at least two other copies of himself, albeit while his personality traits are divided up amongst them), Resistance to Possession while transformed

Transformation (Skurd can shift his limbs into those of other aliens)

Attack Potency: Human level | Athlete level (Fought and held his own against Pierce. Was hinted by Max to be a highly-skilled fighter)

Speed: Average Human | Athletic Human, FTL with the Time Cycles (Much faster than and blitzed a Time Beast, which Rook stated moved faster than light), likely higher when fueled by Time Beast Eggs (Can travel into the timestream, which is a point in space-time where all past, present and future timelines meet and intersect)

Stamina: Unknown (Depends on what type of Alien he currently is, or in his original form)

Intelligence: Ben is rather disinterested in school and thus is not particularly worldly at first. This flaw was compounded by the fact that he had a short attention span and preferred to enjoy himself and shirk responsibility as any boy his age would. However, he matures and becomes extremely well-accustomed to battling alien lifeforms over the course of his adventures to the point of facing the universe's most vile and powerful villains and coming out on top in the end. As a teenager, he actually attempts to study. He got a C+ on his worst subject, Chemistry after only studying for a few minutes (And likely the 3 hours he had until his exam began the following morning). In addition, he becomes a brilliant scientist as an adult, developing his own Omnitrix systems and even fusing multiple aliens together for various effects on top of handling crime almost entirely by himself. However, he still has his bouts of arrogance from time to time, and occasionally comes off as lazy and reckless. Furthermore Ben as a teenager is an intergalactic police officer known as Plumber and visits planets to solve alien related crimes on a daily basis. Even during the time his friends were about to be killed he maintained his composure and outsmarted Vilgax on the planet Primus while he lost his Omnitrix.

Weaknesses: All the weaknesses that the Omnitrix has. As a 10-year-old, Ben was very immature and could be quite overconfident. While he became more mature and less overconfident in Alien Force and Ultimate Alien, this resurfaced in Omniverse. Ben is allergic to peanuts and is afraid of peacocks. As a child, he had a fear of clowns. Although he got over this, it resurfaced in Omniverse.

Note: This page is about Ben Tennyson as a human with the Omnitrix. His alien transformations are in separate profiles shown in the gallery below.

Henry Stickmin (Henry Stickmin (Series)) Henry’s Profile (This was Omniverse Ben who had access to Master Control with all his aliens and equipment, Henry was in his cybernetic form, and speed was equalized)