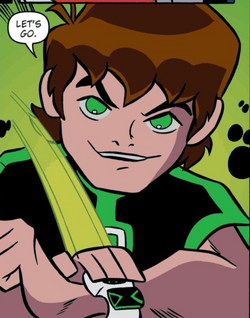 Ben Tennyson is the main protagonist of the comic book series published by IDW Publishing. A boy who can turn into 10+ aliens.

Classification: Human, but he can change species with the Omnitrix

Powers and Abilities: With the Omnitrix: Shapeshifting

Attack Potency: Unknown (Ben uses his alien forms instead of his human form)

Durability: At least Wall level (Survived from a blast by Sunder's Blaster Pistol in human form)

Stamina: Unknown (Depends on what type of alien he currently is, or in his original form)

Retrieved from "https://vsbattles.fandom.com/wiki/Ben_Tennyson_(IDW)?oldid=5870295"
Community content is available under CC-BY-SA unless otherwise noted.