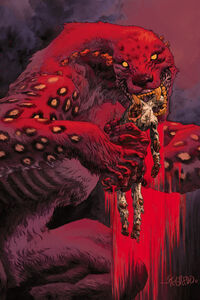 Ben Daimio was just U.S Marine Captain when he was sent on the mission that would change his life. He and his team were sent to stop a cult and were all killed in the process. Ben was resurrected by the Jaguar God and woke up in a body bag. He soon after joined the BPRD as one of its top agents. However, due to his resurrection, he would sometimes turn into a violent and uncontrollable jaguar spirit.

Attack Potency: Wall level (Is able to defeat people strong enough to hurt him) | Building level (Managed to badly hurt a wendigo who should be comparable to Abe Sapien)

Speed: Superhuman | Supersonic (Blitzed trained soldiers, and should be comparable to Abe Sapien in speed)

Intelligence: Genius (He is a master strategist, tactician, and combatant.)

Retrieved from "https://vsbattles.fandom.com/wiki/Ben_Daimio?oldid=6553545"
Community content is available under CC-BY-SA unless otherwise noted.