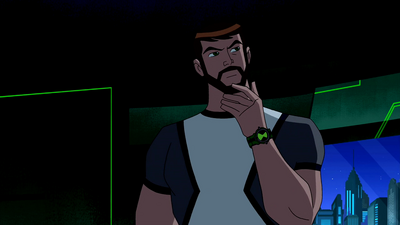 Benjamin "Ben" Kirby Tennyson, self-nicknamed Ben 10,000, is a potential future version of the main timeline's Ben Tennyson. Coming from a future where he kept the Ultimatrix, he is considerably more brash and immature than an alternate version of himself, but proves to be a hero all the same.

Classification: Quarter-Anodite, but he can change species with the Ultimatrix

Powers and Abilities: With the Ultimatrix he has: Transformation, Power Mimicry and Self-Destruction, Some degree of Magic

Attack Potency: Street level (Easily defeated many of Eon's servants at once) | At least Dwarf Star level (Has the combined powers of every alien in the Ultimatrix, which includes Ultimate Way Big) | Multiverse level (With Alien X)

Note 2: Not to be confused with the character with the same name from the main timeline.