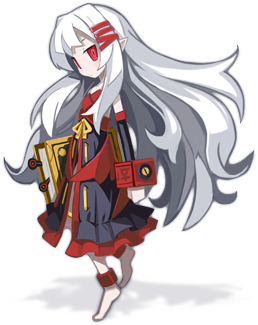 Belleria is a mysterious girl who appears in front of Chou-Chou's party that shares Chou-Chou's power of making things into her peons. Due to Chou-Chou refusing to leave anyone else take what she considers hers away, the two fight several times, becoming friendly rivals.

Attack Potency: Multi-Galaxy level (Fought Chou-Chou one on one near the end of the game. Capable of defeating Vorgis with the rest of the party and was absorbed by Vorgis to complete his transformation into his Deified form) | Multi-Galaxy level (Comparable - though still inferior - to undisputed goddess Chou-Chou, her role as a god of destruction was destroying worlds. Vorgis stated that with her full potential he could consume the Universe.)

Durability: Multi-Galaxy level (able to fight against Chou-Chou - who had recovered her gem - one on one) | Multi-Galaxy level (Fought undisputed goddess Chou-Chou, with the clash of their powers accidentally splitting Chou-Chou's world in seven parts. Should be equal to that of Deified Vorgis.)

Stamina: Vastly Superhuman (Traveled to the depths of the Mugen Field while fighting enemies under higher and higher temperatures, proceeding to engage the Sun Goddess in battle alongside the party) | Unknown, likely Higher

Weaknesses: Can only turn people in their peon if they are weak enough, with stronger people going into a violent, berserk state