Archmagos Dominus Belisarius Cawl was already old at the birth of the Imperium, over ten thousand years ago. During that span of ages the Tech-Priest has served Mars and the Machine God as a Forge Lord and a Lexico Arcanus, but it is in his role as Magos Biologis that Cawl’s greatest mastery lies. It is rightfully said that the aged Archmagos Dominus has forgotten more knowledge, particularly about genetics, than all but the most studious could ever hope to learn. Despite his own memories being stolen – twice has Cawl suffered mindwiping – he remains a tech-savant, a genius at the forefront of whatever field to which he turns his mind. Even amongst the ranks of the Adeptus Mechanicus – where artificial devices increase brain capacity and extend life beyond measure – such an accumulation of knowledge in multiple disciplines is exceedingly rare. The Priesthood of Mars title such beings as Prime Conduits of the Omnissiah, or as Dominatus Dominus – Master of Masters – and of those few that still survive, Cawl is by far the most active.

Archmagos Dominus Cawl dedicates himself to a multitude of projects, his mind leaping from the construction of Mars’ largest Macromag-cannon, to perfecting his stasis field work, or to the endless experiments he conducts within his city-sized laboratories housed in Mars’ extensive underground complexes. The majority of these obsessive undertakings are done in secret. Cawl has so many projects running simultaneously that he has added multiple consciousnesses to track them and employed furtive measures to keep them hidden from rivals. Deep in sealed vaults, countless experiments await Cawl’s multi-faceted servo-eyes. Since reloading a portion of his stored memories, the ancient Tech-Priest has become forgetful, prone to spending recuperative decades within his own stasis crypts. Yet such prolonged periods offline inspire Cawl to once more take to the field in his hunt for knowledge. It is during such times that Cawl dons the mantle of Archmagos Dominus, gathering about him Skitarii Legions and maniples of the Legio Cybernetica. Although Mars is his home world, other forge worlds often place troops beneath Cawl’s command, asking only that he shares any knowledge accumulated.

Age: Over 11,000 Years Old (Was alive when the Emperor was first developing the Space Marines)

Speed: Unknown Movement Speed, At least Hypersonic+, likely FTL Combat & Reaction Speed (To an Archmagos Dominus, the secrets of the battlefield are laid bare. They can track every bullet’s ballistic trajectory in slow motion, and process every las-pack’s current capacity and every battle engine’s optimal fire solution. Belisarius Cawl himself is capable of processing and cogitating billions of different tasks and algorithms simultaneously, and should be superior the Mechanicus Magos capable of processing information and running calculations in timeframes of microseconds or even nanoseconds)

Range: Extended Melee Range with Omnissian Axe. Up to Kilometers with Ranged Weaponry

Intelligence: Supergenius. Belisarius Cawl possesses multiple cybernetic enhancements in his brain, allowing him to process and store information with the speed of a super-computer. Can analyze and directly interact with all manner of technology, and his enhanced memories allows him to store mountains of information in bhinaric code-stacks. Has been alive for over 11,000, and personally aided the Emperor of Mankind in the development of the Adeptus Astartes' Black Carapace. Created the Primaris Space Marines, improving on the Emperor's work. Has invented dozens of weapons, uncovered scores of STCs, and quested for knowledge across the galaxy, even once venturing into the Eye of Terror. Has helped drive hundreds of minor Xenos species to extinction, and possesses the chematic details of wonder-engines lost since the Age of Technology. Is constantly working on numerous innovative secret projects at once, and has implanted multiple secondary Artificial Intelligences in his mind to allow him to better process all the information he possesses, and to constantly execute multiple tasks at once. Possesses numerous personality filters installed in his augmented mind, allowing him to shift through moods and dispositions as easily as a normal man chooses between different pieces of clothing. Can understand the "mathematics of noospheric data exchange packets in a virtual, nine-dimensional informational manifold exchange", whatever that is.

Weaknesses: Almost completely insane. His vast accumulation of knowledge over his millennia of life have resulted in malfunctions, erasures and jumbled bibelots in his memories, leading to Cawl forgetting how he came to acquire large portions of his knowledge, and losing recollection of many events in his life. Requires the aid of multiple Artificial Intelligences to properly think and remain focused on a single task. 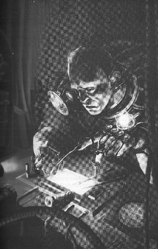 Belisarius Cawl as a human Tech-Acolytum in the Horus Heresy.

Cawl and Guilliman oversee the development of the Primaris Space Marines. 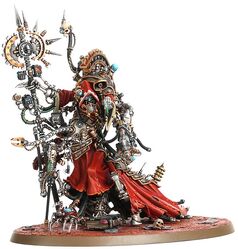 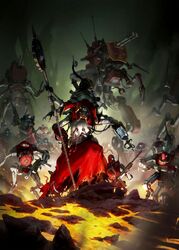