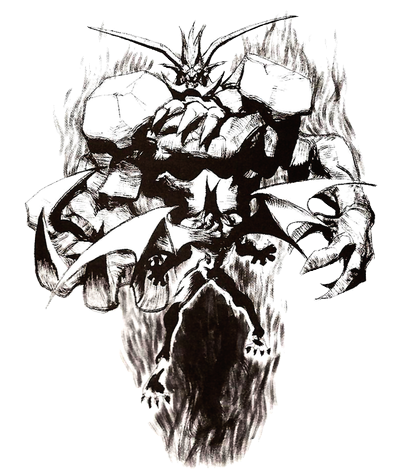 Known as the Demon King, Belial is the only Class S+ Demon, and is the true ruler of Makai. He stands higher than 625 ft, has four arms and four eyes. He is the guardian and parent of Morrigan Aensland.

Compared to other demons, he is viewed as special due to the immense raw power within him. His power is comparable to several hundred thousand Makai beasts or is equal to several hundred A class Makai nobles like Demitri. In theory, he is the most powerful demon in existence.

His body is constantly covered with a thin barrier. This barrier can stand up to one million degrees Celsius, and any normal Makai being would perish the moment they come into contact with it. He seals two out of his four arms to contain his power. In the past, he has unsealed all four of his arms once, and it was said that he killed 200 Makai nobles with a swing of his arm. He uses an attack called the "Scalephoton" which emits a highly compressed arrow of magic at a high speed at its victims. This attack would even kill Galnan and Jedah if it were to hit them.

Even though he possesses incredible power, he never showed any interest in ruling Makai. This didn't mean that he had no greed or ambition, however, quite the contrary. To him, the world of Makai was simply part of his body and self, and so the thought of trying to rule his own hands and feet never came out. Even though no one doubted Belial's rule, the struggle for power within Makai had never ended.

100 Years in the past, the vampire lord of Makai Demitri attempted to overthrow Belial, but was quickly defeated. In the combat, Belial took hold of Demitri's castle and ripped through the Gate of Makai, imprisoning Demitri on Earth. However, damaging space itself had also damaged Belial's body, and his powers began slowly diminish ever since.

Knowing that when his powers reached 0, the balance of Makai would collapse onto itself, Belial searched for a successor, and found a Succubus of extraordinary power on Scotland. He named her Morrigan, however, Belial soon saw that the girl had far too much power, and if let uncontrolled, she would destroy all of Makai. Therefore, he extracted some of her power and sealed part of it away. Over 300 years, the separated energy became a soul of its own and watched Morrigan's life in Makai, said soul would eventually be known as Lilith.

Belial sealed the rest of Morrigan's energy inside his own body, intending to give it back to her when she was ready. However, with Belial's demise, said energy seems to have been lost.

Name: Belial Aensland, the Demon King, the Ruler of Makai

Attack Potency: At least Galaxy level (The strongest being of the Darkstalkers Verse, far above the likes of Pyron and Jedah, sliced through the spacial Gate that separated the universes of Earth and Makai. Even when greatly suppressed he is still far above any S Class Darkstalker)

Weaknesses: After damaging his own body and soul with an attack, he began to age and lose his power, until his demise came.