VS Battles Wiki
Register
Don't have an account?
Sign In
Advertisement
in: Tier 6, Tier High 6-A, Tier 2,
and 55 more 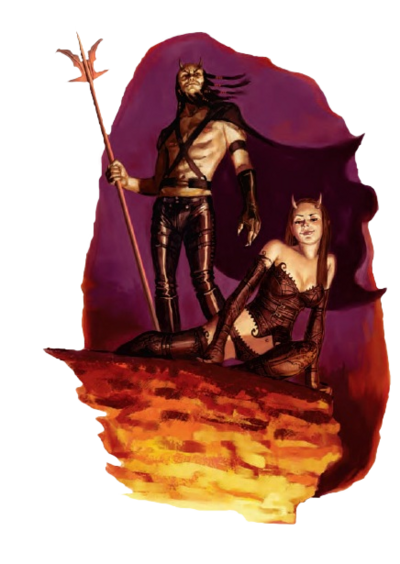 Belial is an Archdevil of Baator and member of the Lords of the Nine, the group controlling the collective layers of Hell. At least, this was the case prior to the Reckoning, at which point he was ousted from his position by Asmodeus, whom he failed to overthrow in a rebellion. Now he merely guides his daughter in her time of leading his layer of Baator.

Belial is, much like all other Archdevils, a schemer. He seeks to take over two other layers of Baator below his fourth layer, and has only recently been halted by the presence of Asmodeus' daughter, Glaysa. Belial spends his days supporting all that which makes up his concept- secrets, domination, and seduction. He is the consort to his own daughter, an affair which allows him to maintain power in Hell.

Name: Belial, Lord of the Fourth

Classification: Archdevil, Lord of the Nine

Powers and Abilities: Superhuman Physical Characteristics, Law Manipulation, Chaos Manipulation (Devils contribute to the balance of Chaos and Law that makes up reality; with an upset of the balance in favor of either one, severe effects take place within reality, including delusion of the minds of those aligned with the opposite force, inexplicable deaths, etc), Corruption (Type 2), Morality Manipulation (Merely listening to the words of a Devil can turn a target evil), Soul Manipulation (Devils are capable of sending souls to hell, though prefer evil ones, upon their death), BFR (Souls transform into a physical shell and are cast into Baator upon death), Text Manipulation (A devil imprints the soul of a corrupted target with their name automatically), Extrasensory Perception (A devil can see the state of one's soul and if another devil has claimed it), Pain Manipulation (A devil is capable of torturing and flaying the soul), Energy Manipulation (Hell is powered by divine energy drawn out from the soul via pain), Power Bestowal (All devils save Lemures can raise other devils to a higher rank, effectively giving the abilities of that rank), Reactive Evolution (Given enough soul energy, a devil can ascend to a new rank of devil, for example, a Spined Devil may become a Bearded Devil), Madness Manipulation (Type 3, Anyone outside of the ranks of Baator seeing their regeneration is induced with crippling fear), Absorption (A devil can absorb the energy released by a soul), Disease Manipulation (Those that devour the flesh of a Baatezu once killed become lethally ill), Preparation (As military geniuses, devils benefit greatly from preparation, creating traps and tricks to practically ensure victory in a given encounter), Fear Manipulation (The equipment of a Devil induces moderate fear in those around them), Acausality (Types 1 and 4, comparable to deities on the level of Labelas Enoreth, who is the reason causality even proceeds), Abstract Existence (As Outsiders, devils are purely abstract in their physiology, lacking any biology in a traditional sense), Self-Sustenance (Types 2 and 3), Magic, Reality Warping, Conceptual Manipulation (Type 1, Gods are concepts given form, allowing them to change their concepts by changing themselves, all across reality), Regeneration (Mid-Godly, deity-class creatures can return from being erased by a Sphere of Annihilation, which erases mind, body, and soul), Regeneration Nullification (Mid-Godly, a deity, demon lord, or archdevil can indeed permanently kill a god, though they must generally be lesser in status to do so), Immortality (Types 1, 2, 3, 8, Avatars possess 6 and 9; Devils will resurrect if killed outside of Baator; Many devils are older than measured time itself, including several Pit Fiends and multiple Archdevils, such as Dispater)), Avatar Creation, Possession, Probability Manipulation (The actions of deity-class beings can increase their chances to do various things passively- they will always move first, always deal maximum damage, always hit their target, etc), Mind Manipulation (Deities can control the minds of those within their sphere/alignment), Holy Manipulation, Weather Manipulation (Archdevils can create harmful weather effects on their layers of Baator and presumably elsewhere), Petrification (Archdevils can petrify other beings on their own level or far stronger), Enhanced Senses, Telepathy, Damage Reduction, Martial Arts, Weapon Mastery, Space-Time Manipulation (Deity class beings can control the entirety of the space-times of their planes or layers), Aura of Fear, Enhanced Senses, Damage Reduction, Summoning, Mind Manipulation via Dominate, Empathic Manipulation via Charm, Statistics Reduction via Geas, Darkness Manipulation, Clairvoyance, Illusion Creation, Magic Nullification via Dispel Magic, Invisibility Detection, Damage Boost via Vile, Life Manipulation via Fleshgrinding (Can animate his weapon to act separately from himself), Extreme Resistance to Fire Manipulation, Poison Manipulation, Ice Manipulation, Acid Manipulation, Magic, and Reality Warping

Attack Potency: Multi-Continent level (Superior to mortal creatures such as the Phaethon) | Universe level+ (Superior to Demon Lords individually, such as Malcanthet)

Lifting Strength: Class 5 (Can push over 4.7 metric tons) | Infinite (Comparable to the likes of Kronus)

Stamina: Infinite, Outsiders possess no need for sleep or sustenance and can continue to function indefinitely | Infinite

Range: Multiversal, comparable to Demons, whose visitation to a plane of existence can shunt it across the multiverse and into the Abyss

Intelligence: At least Extraordinary Genius, vastly superior to the likes of an Elder Brain, who possesses all intellect of their multiverse-spanning, star-absorbing, space-faring civilization