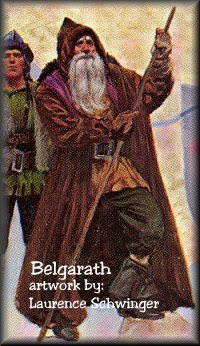 Belgarath the Sorcerer was the father and ultimate grandfather, respectively, of Polgara and Belgarion. He was called the Ancient and Beloved in the Mrin Codex and The Eternal Man by various storytellers and was generally regarded as the most powerful sorcerer in the universe.

Name: Belgarath the Sorcerer, Disciple of Aldur, The Ancient and Beloved, The Eternal Man

Attack Potency: Average level physically (Stopped aging at 70, but is very fit for his age). At least Multi-City Block level with magic (Stopped a massive lightning storm with bolts of lightning as thick as tree trunks), possibly City level (Made a sword out of pure energy )

Intelligence: Gifted. He was the first human to learn Sorcery. Spent thousands of years making scientific discoveries such as discovering how many stars are in the sky and why mountains grow.

Retrieved from "https://vsbattles.fandom.com/wiki/Belgarath?oldid=4568401"
Community content is available under CC-BY-SA unless otherwise noted.