VS Battles Wiki
Register
Don't have an account?
Sign In
Advertisement
in: Tier 7, Tier Low 7-B, Tier 6,
and 73 more 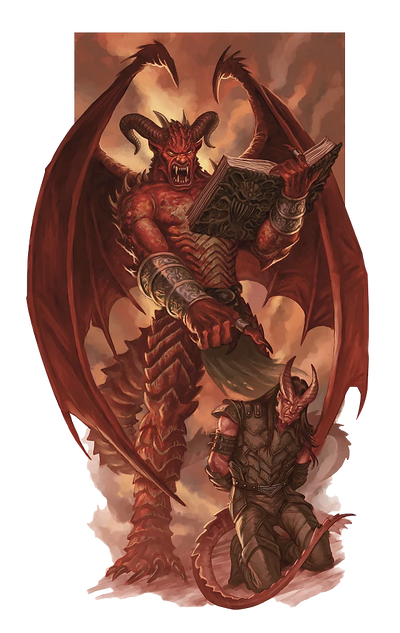 Bel, Lord of the First was once a powerful Pit Fiend who betrayed his master on his home layer of Baator, Avernus, to usurp him and take his throne. After a successful coup, Bel became the youngest of all lords in Hell, and is unique among his allies in that he desires war and rampage against demonkind whereas they are careful and plotting.

Bel is known as the overall leader in the Blood War, and maintains a status as a slaughterer of demons among the Dark Eight.

Name: Bel, Lord of the First, General of the Third Command, Warlord of Avernus, The Pretender

Classification: Archdevil, Lord of the Nine

Powers and Abilities: Superhuman Physical Characteristics, Law Manipulation, Chaos Manipulation (Devils contribute to the balance of Chaos and Law that makes up reality; with an upset of the balance in favor of either one, severe effects take place within reality, including delusion of the minds of those aligned with the opposite force, inexplicable deaths, etc), Non-Physical Interaction (Magic in D&D can interact with abstract, intangible, conceptual, incorporeal, or nonexistent beings), Corruption (Type 2), Morality Manipulation (Merely listening to the words of a Devil can turn a target evil), Soul Manipulation (Devils are capable of sending souls to hell, though prefer evil ones, upon their death), BFR (Souls transform into a physical shell and are cast into Baator upon death), Text Manipulation (A devil imprints the soul of a corrupted target with their name automatically), Extrasensory Perception (A devil can see the state of one's soul and if another devil has claimed it), Pain Manipulation (A devil is capable of torturing and flaying the soul), Energy Manipulation (Hell is powered by divine energy drawn out from the soul via pain), Power Bestowal (All devils save Lemures can raise other devils to a higher rank, effectively giving the abilities of that rank), Reactive Evolution (Given enough soul energy, a devil can ascend to a new rank of devil, for example, a Spined Devil may become a Bearded Devil), Madness Manipulation (Type 3, Anyone outside of the ranks of Baator seeing their regeneration is induced with crippling fear), Absorption (A devil can absorb the energy released by a soul), Disease Manipulation (Those that devour the flesh of a Baatezu once killed become lethally ill), Preparation (As military geniuses, devils benefit greatly from preparation, creating traps and tricks to practically ensure victory in a given encounter), Fear Manipulation (The equipment of a Devil induces moderate fear in those around them), Abstract Existence (As Outsiders, devils are purely abstract in their physiology, lacking any biology in a traditional sense), Self-Sustenance (Types 2 and 3), Magic, Reality Warping, Conceptual Manipulation (Type 1, Gods are concepts given form, allowing them to change their concepts by changing themselves, all across reality), Regeneration (Mid-Godly, deity-class creatures can return from being erased by a Sphere of Annihilation, which erases mind, body, and soul), Regeneration Nullification (Mid-Godly, a deity, demon lord, or archdevil can indeed permanently kill a god, though they must generally be lesser in status to do so), Immortality (Types 1, 2, 3, 8, Avatars possess 6 and 9; Devils will resurrect if killed outside of Baator; Many devils are older than measured time itself, including several Pit Fiends and multiple Archdevils, such as Dispater), Avatar Creation, Possession, Probability Manipulation (The actions of deity-class beings can increase their chances to do various things passively- they will always move first, always deal maximum damage, always hit their target, etc), Mind Manipulation (Deities can control the minds of those within their sphere/alignment), Holy Manipulation, Weather Manipulation (Archdevils can create harmful weather effects on their layers of Baator and presumably elsewhere), Petrification (Archdevils can petrify other beings on their own level or far stronger), Enhanced Senses, Telepathy, Damage Reduction, Martial Arts, Weapon Mastery, Space-Time Manipulation (Deity class beings can control the entirety of the space-times of their planes or layers), Large Size (Type 1), Flight, Fire Manipulation (His sword is wreathed in constant flame), Poison Manipulation (Attacks inflict a lethal poison), Disease Manipulation (Attacks induce the diseases of the planes- many such diseases even liquefy enemies from the inside out or reduce them to nothing), Aura, Fear Manipulation (Induces supernatural fear in his enemies by his appearance alone), Summoning, Stealth Mastery, Absorption (Absorbs the power of Zariel, the former Lord of the First, drawing on her might to sustain his own), Necromancy, Death Manipulation, Unholy Manipulation, Paralysis Inducement, Statistics Reduction, Perception Manipulation (With Blasphemy, Bal can at-will daze, weaken, paralyze, and instantly kill enemies around him), Mind Manipulation, Possession, Empathic Manipulation (Can cause a target to feel allied with him, making them want to perform whatever tasks they believe will help him the most), Good and Magic Detection, Magic Nullification, Magic, Reality Warping, Hellfire Manipulation, Invisibility, Illusion Creation, Shapeshifting, Teleportation, Creation, Explosion Manipulation, Sleep Manipulation, Stun Inducement (Can generate a rune in the air which, when viewed, evokes an effect of Bel's choosing- from the choice of Death, Fear, Pain, Insanity, Sleep, Stunning, and Weakness), Causality Manipulation (Bel can make use of a Wish spell, which instantly reorders past, present, and future to achieve the effect stated in the current place in time), Enhanced Senses, Dimensional Travel, Extreme Resistance to Fire Manipulation, Poison Manipulation, Magic, Reality Warping, Soul Manipulation, Darkness Manipulation, Ice Manipulation, and Acid Manipulation

Attack Potency: At least Small City level+, possibly Island level+ (Bel was once a Pit Fiend) | Multi-Continent level (Slew an elder Archdevil, and should logically be above mortal creatures including the Phaethon) | Universe level+ (Even weak Archdevils such as Bel can and do control the space-time of their layers of Baator- Bel is considered the prime devilish fighter in the Blood War and thus should be more than capable of battling Demon Lords such as Malcanthet)

Stamina: Infinite, Devils can act indefinitely without rest or food

Standard Equipment: Ring of Magical Protection and a Flaming Greatsword

Intelligence: At least Extraordinary Genius- fully capable of analyzing the battle tactics of the entirety of the infinite abyss and countering them with his own soldiers; superior to the Elder Brain, a creature that maintains the information of a multiversal civilization with space-faring, multiverse-colliding technology in a medieval setting