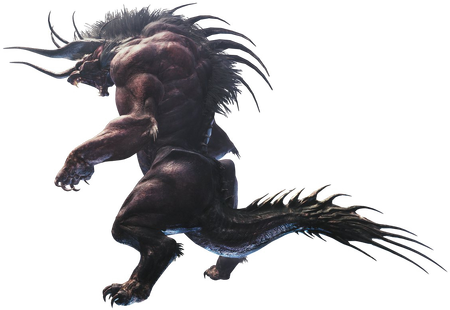 The Behemoth is a crossover monster introduced in Monster Hunter World. A powerful beast from another world, its large horns and muscular frame defy nature. Unique strategies are required to battle it, making it one of the strongest Elder Dragons in the entire game. Resulted from a crossover event between Monster Hunter World and Final Fantasy XIV.

Attack Potency: At least Multi-Continent level (Should be comparable to Xeno'Jiiva)

Speed: Massively Hypersonic+ (Should be comparable to Xeno'Jiiva)

Intelligence: At least Above Average, likely higher (Dragon Element does more damage relative to ones own intelligence and the element is its major weakness)

Retrieved from "https://vsbattles.fandom.com/wiki/Behemoth_(Monster_Hunter)?oldid=6628426"
Community content is available under CC-BY-SA unless otherwise noted.