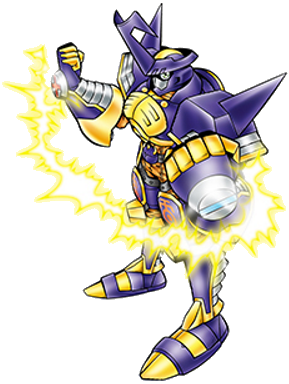 Beetlemon is a Digimon that possesses power over Thunder which bears the might of one of the legendary Ten Warriors. Its keen movements, unbecoming of its large build, are a technique to form a high voltage current running throughout its body. It generates a special magnetic field that produces an anti-gravity state in its vicinity, and is capable of high-speed movement. Its overflowing thunder power comes out as sparks from various parts of its body, and although Blitzmon looks mechanical, its personality is, in contrast, expressive and human. Its language is trollish, but it additionally conveys excess warmth. In battle, its underwater mobility is weak due to the nature of its wrestler-like style. 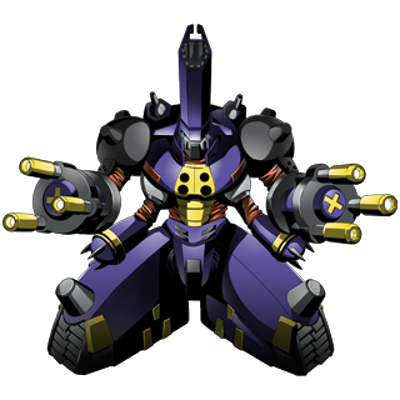 A Digimon that possesses power over Thunder which bears the might of one of the legendary Ten Warriors. It has a cautious and prudent personality because it was discovered in a defense system created in reference to the Scarab treasure chamber in the deepest part of a pyramid. During battle, it patiently serves as a shield for its comrades using its sturdy armor and endures the opponent's attacks, but if it reaches its critical point it will go on an intense offensive with all of its gunports until even the opponent's form is reduced to nothing. Because its heavy weight lowers its mobility, it is basically the one in charge of logistical support. However, in close-range battles it obliterates the opponent with its various armaments.

Junpei "J.P." Shibayama is a main character from Digimon Frontier. He was chosen to inherit the spirits of thunder of AncientKabuterimon allowing him to use Spirit Evolution to become the Legendary Warrior of Thunder.

Speed: FTL (Comparable to Takuya) | At least Relativistic+ (Somewhat slower than Beetlemon due to increased armor, weight, and size), with FTL reactions/Combat speed (Can still react to and fight the other Warriors)

Durability: At least Island level (Is comparable to his fellow Legendary warriors and has tanked attacks from Ultimate-level Digimon like Volcamon) | At least Large Star level, possibly Multi-Solar System level

Stamina: High; has fought powerful opponents and remained conscious after being attacked by Lucemon

Standard Equipment: Digivice for decrypting and absorbing the data of defeated Digivice as well as evolution | Multiple Electric Cannons as well as an Antimatter Cannon as Bolgmon/MetalKabuterimon

Intelligence: A jokester and somewhat immature, nevertheless one of the more level-headed of the DigiDestined and can work his way out of a bind more easily than his younger peers, somewhat knowledgeable about physics (used the projectile motion formula to try and launch Agnimon to a far-off moon). As Beetlemon he is a skilled hand-to-hand combatant able to go toe-to-toe with opponents well above his weight class and incorporates his powerful lightning attacks into his fists to paralyze opponents as he strikes them.

Weaknesses: Is a normal human if deprived of his D-Tector, Field Destroyer/Electron Laser has a short charge up time

Retrieved from "https://vsbattles.fandom.com/wiki/Beetlemon?oldid=5913080"
Community content is available under CC-BY-SA unless otherwise noted.