VS Battles Wiki
Register
Don't have an account?
Sign In
in: Marvel Comics, Ultimate Marvel, Comic Book Characters,
and 19 more 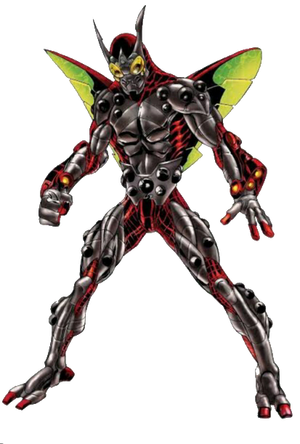 The Beetle is an unnamed Latverian spy sent on a mission to retrieve the Venom symbiote using an elaborate armor. Despite hurdles from Spider-Man, Beetle manages to trap and escape with the symbiote along with Eddie Brock.

Powers and Abilities: Superhuman Physical Characteristics, Flight, Energy Projection of various types, Homing Attack (As shown here), Intangibility (Phased through a building, and phased through Spider-Man, causing him to be surrounded in flames), Knock Out Gas Grenades and Absorption (Entirely absorbed the symbiote alongside Eddie Brock)

Stamina: High, kept going even after receiving extended damage at the hands of Venom