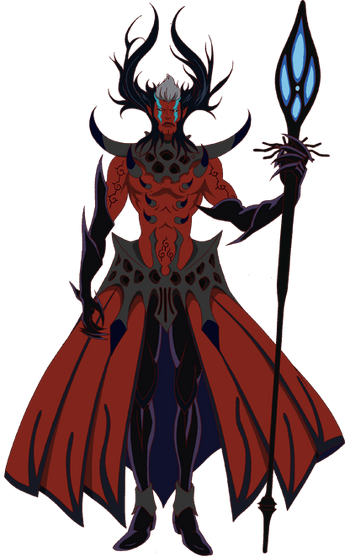 Beelzebub is a high-ranking demon and is a primary antagonist in the first season of the anime series Rage of Bahamut: Genesis.

Powers and Abilities: Superhuman Physical Characteristics, Immortality (Type 1, possibly Type 4), Magic, Glyph Creation (likely non combat-applicable), Teleportation, Enhanced Senses (incinerated angels charging at him from all kinds of directions without them being in his field of view) Flight (With his floating platform), Natural Weaponry (Can use his claws and tail made of fire in combat), likely Self-Sustenance (Type 2 and 3), Large Size (Type 0), Limited Telekinesis (Can control his staff), Unholy Manipulation, Fire Manipulation, Electricity Manipulation, Forcefield Creation, Sealing (Can imprison people in a magic cage with a glance), Heat Manipulation (Can torture people trapped inside the magic cage by heating up the insides), likely Summoning (His floating platform and likely more), Life Manipulation (Created a half-demon/half-angel offspring from his and an angel's essence), likely Resurrection (His lie about wanting to resurrect Satan seemed plausible enough as a pretext for his true plans), Power Bestowal (Can give someone a protective enchantment that summons a copy of him that attacks enemies when the receiver is in danger), Resistance to Heat Manipulation and Fire Manipulation

Speed: At least Subsonic, likely higher (Should be comparable to Azazel)

Lifting Strength: Superhuman (Should be comparable to Azazel)

Durability: Small Town level, likely higher (Survived a direct hit from Bahamut, although only barely and he was critically injured)

Start a Discussion Discussions about Beelzebub (Rage of Bahamut)