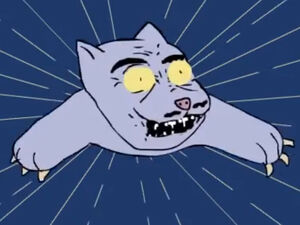 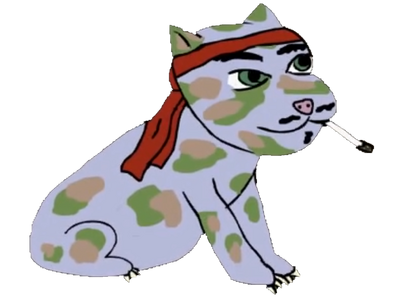 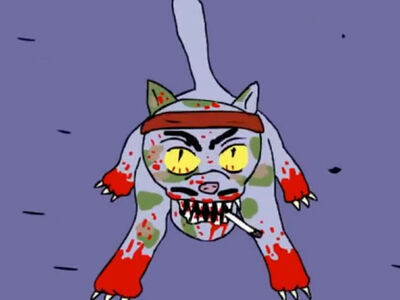 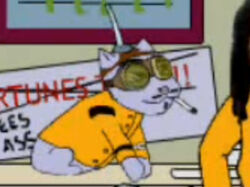 Originally an ordinary cat, Beebo was injected with an unknown substance which gave him facial hair and superhuman strength. He currently lives with his owner, Harry who, through his insane and psychopathic nature, gets them both killed, kicked out of Heaven, sent to Hell, and captured by Viet Cong.

Name: Beebo, "The Cat What Has Facial Hair"

Origin: BEEBO: THE CAT WHAT HAS FACIAL HAIR (Newgrounds)

Age: Unknown, likely under 10 (When Harry is judged to see whether he can enter Heaven, Beebo isn't mentioned until Harry's last decade of life)

Superhuman Physical Characteristics, Natural Weaponry, Enhanced Senses, Berserk Mode, Self-Sustenance (Type 2, possibly Type 3 to a certain extent), Weapon Mastery (Can use two machine guns at once despite them being much larger than him), Time Manipulation via the Timometer

Immortality (Type 4, can physically leave Hell), Resurrection, and Regeneration (Mid, all of Beebo's wounds seem to disappear upon entering Hell)

Attack Potency: At least Wall level (Went down a man's throat and busted out of his chest. Decapitated, shot and tore apart several Viet Cong soldiers. Equal, if not superior to Harry, who overpowered and raped a killer whale. Obliterated a man's head by pouncing on him), likely higher (Dug from Hell to Earth in a month without any food, water or rest, which completely drained his stamina, and was still able to burst out of the ground)

Speed: At least Supersonic (Dodged automatic fire), possibly higher (Dug from Hell to Earth in a month with his bare paws)

Lifting Strength: At least Athletic Human (Went down a man's throat and ripped out of his torso by pushing upwards to retrieve a sandwich), likely higher

Durability: At least Wall level (Was completely unfazed after being thrown out of an apartment building. Equal, if not superior to Harry, who overpowered and raped a killer whale. Survived being slammed repeatedly into the ground by Ding Ling, who is shown to be physically superior to both him and Harry), likely far higher (Completely unaffected by the massive heat of Hell, which we know his physical body was in since it was the same one that dug out and still exists on Earth)

Stamina: Extremely high (Burrowed from Hell to Earth for a month without falling, dying, or sleeping (he would have fallen and died if he had slept), and while this completely drained his stamina, he still survived a month without sleeping, eating or drinking, which is extraordinarily impressive)

Intelligence: At least Animalistic, likely Above Average (Learned how to use the Timometer)

Weaknesses:  Beebo takes a month to dig out of Hell, meaning it isn't usually combat applicable. Can completely lose control and go berserk, although this can be useful in a combat situation. After digging out of Hell, Satan could notice he is gone and attempt to recollect his soul. However, this takes time and isn't combat applicable, and Satan was canonically killed anyways. If the Timometer is damaged while the user is going through time, it can malfunction.