VS Battles Wiki
Register
Don't have an account?
Sign In
in: Characters, Male Characters, Cartoon Characters,
and 24 more 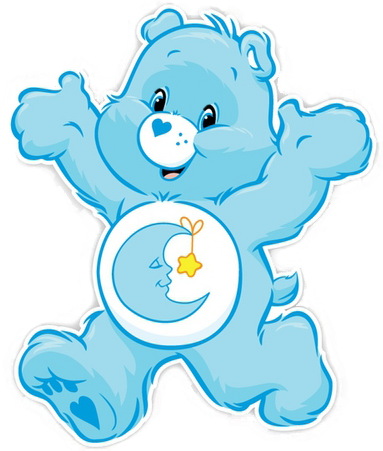 Bedtime Bear is one of the ten original Care Bears who originally appeared on American Greetings greeting cards in 1982. As his name would suggest, he can most often be found dozing off at just about any place or time. However, when the situation calls for it, he can be dependable and is always willing to help out those who need it. It is his duty to make sure everyone on Earth and in the Care Bear family gets enough sleep and dreams peacefully.

Powers and Abilities: Superhuman Physical Characteristics, Aura, Enhanced Senses (Able to hear cries of distress on Earth even while up in Care-a-lot or the Forest), Extrasensory Perception (The symbols on their stomachs flash whenever there is danger or someone struggling with caring nearby), Flight (Via cloud car), Empathic Manipulation, Telekinesis, Power Nullification, Purification (Types 1, 2, and 3), Light Manipulation (All Care Bears and Care Bear Cousins are able to create light and hard light constructs), Energy Projection, Body Puppetry, Morality Manipulation, Teleportation, BFR (All Care Bears and Care Bear Cousins have the ability to send others to Care-a-lot or the Forest of Feelings), Non-Physical Interaction (The Care Bear Stare has harmed No Heart's shadows, the Spirit, and the Spell), Cloud Manipulation, Creation, Homing Attack, Sleep Manipulation, Dream Manipulation, Resistance to Willpower Manipulation (Members of the Care Bear family were able to withstand exposure to the rainbow crystal for far longer than any humans could before succumbing to its effects), Madness Manipulation (Type 2, the Spirit was unable to turn anyone within the Care Bears' vicinity uncaring or crazy), Chaos Manipulation (Unaffected by Dark Heart's passive chaos creation)

Attack Potency: At least Multi-City Block level (Should be comparable to members of the Care Bear Family who launched a spaceship into space) to Large Town level+ (Should be capable of harming Professor Coldheart), possibly Mountain level (Helped fight the Spirit, who caused a massive cloudquake). The Care Bear Stare ignores durability against evil beings.

Speed: Massively Hypersonic+ (Should be comparable to Grumpy)

Durability: At least Multi-City Block level to Large Town level+ (Should be comparable to the likes of Grumpy and Swift Heart), possibly Mountain level (Endured a swipe from the Spirit's tendrils)

Intelligence: Above average (Successfully infiltrated No Heart's castle without alerting anyone and devised a clever and effective plan to wake up everyone affected by the sorcerer's sleeping powder)

Standard Tactics: Bedtime Bear is a bit unique compared to the other members of the Care Bear Family in that, instead of the traditional Care Bear Stare, his go-to defense is to generate a small moon. This follows Bedtime Bear's opponent and dances around them for a few moments before coming to rest above his or her head, all the while sprinkling a glittery powder which puts the target to sleep indefinitely.

Weaknesses: Constantly sleepy, though this rarely causes issues in situations which require his full attention.