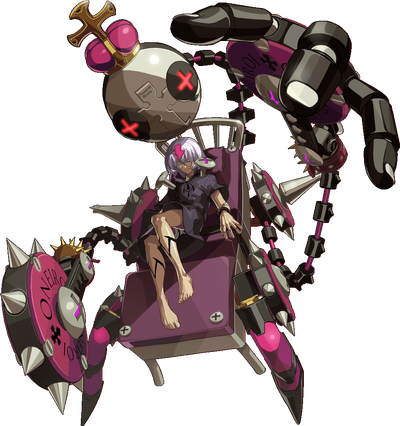 Powers and Abilities: Superhuman Physical Characteristics, Genius Intelligence, Regeneration (Low-Mid), Explosion Manipulation (Capable of creating explosions with his punches), Self-Sustenance (Type 1), Precognition via Mind reading, Aura (Has energy aura whenever he powers up), Dimensional Teleportation (Capable of traveling to different dimensions instantly), Shapeshifting (Capable of changing the shape of his bedframe), Electricity Manipulation (Emitted electricity just by powering up), Memory Manipulation (Temporarily erased Elphelt's memory), Magic as Information Manipulation (Magic in GG is a result of manipulation of information in the backyard), Forcefield Creation (Able to create barrier that Asuka couldn't escape), BFR (Can teleport someone to Backyard), Body Control (Able to extend his arms and shoot his fingers), Sleep Manipulation (Able to cast hypnosis), Time Manipulation and Duplication (Capable of rewinding events, creating duplicates in the process), Information Analysis (Knew a kid's name just by looking at him), Can trap his target in a nightmare world made up of their worst fear (This has shown to be powerful enough to even trap That Man), Dying in the Nightmare kills the target in real life, Reality Warping, Durability Negation, Existence Erasure, Law Manipulation and Resurrection (Able to warp, resurrect and erase others in the dream world, though he doesn't have these in the real world while comatosed. Also stated that his words are rules within his world), Spatial Manipulation, Transmutation, Soul Manipulation, Mind Manipulation, Deconstruction, Death Manipulation, Biological Manipulation, Matter Manipulation and Disease Manipulation (Temporarily created Absolute World for few minutes, which will kill any lifeforms, erases everything within the area, merge Backyard vand reality which is an universe that assault one's body, mind and soul and creates information flares which will break space, floods the area with information, warp reality, create diseases and mutations and rewrite information within an object to turn into something else), Resistance to Extreme Cold, Cosmic Radiations, Death Manipulation, Existence Erasure, Reality Warping, Transmutation, Information Manipulation, Deconstruction, Biological Manipulation, Spatial Manipulation and Disease Manipulation (Should be able to temporarily resist Absolute World which will kill every lifeforms, deconstruct matter at sub-atomic to macro quantum level, erase everything in the universe and create information flares), Material, Spiritual and Mental attacks (Able to reside in dream world which is part of the backyard, which assaults one's body, mind and soul), Sleep Manipulation (Due to already asleep and is conscious while sleeping) and Empathic Manipulation (Able to resist Elphelt's insta kill to some extent)

Attack Potency: Universe level, possibly Universe level+ (Fought evenly against a semi-serious Slayer at less than 8% of his full power. Slayer felt the need to train for the first time in ages before trusting himself to defeat Bedman. Managed to sever Slayer's right arm. Should be comparable to the likes of Sol Badguy at full power). Able to ignore conventional durability in variety of ways.

Speed: At least Massively FTL+, possibly Immeasurable (Impressed Slayer with his speed, avoiding several of his attacks and catching him off-guard. Able to move within Backyard)

Durability: Universe level, possibly Universe level+ (His robot clashed with a semi-serious Slayer and only suffered a severed arm. Tanked an attack from Gabriel, albeit with some damage)

Intelligence: At least Extraordinary Genius. In a world full of futuristic magitek and geniuses, Bedman is considered a freak for his intelligence. His I.Q. and mental energy levels were so impossibly vast, even as a toddler, that his own physical form couldn't biologically contain it, and he was forced to bond into his bedframe robot in a permanent coma to keep most of his mental processes dampened.

Weaknesses: Compulsively talkative. Extremely condescending and rarely, if ever, fights at full power. Cannot speak, warp and erase in the physical world. If he ever wakes up or is separated from his bedframe, he only has 4 minutes before his own thought process will overload his physical form and petrify his body.