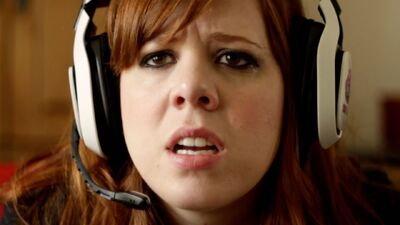 Becka is a character from the Reckless Tortuga web-series "The Online Gamer", where she serves as the deuteragonist of the series. She is the on-and-off again girlfriend of Aaron, who is also an aggressive, foul-mouthed and lazy Call of Duty gamer like she is. Aaron and Becka typically clash over who is the better Call of Duty player with Aaron usually delivering insulting her over her gender with sexist remarks.

At one time, Becky (as she was known at the time) was a sweet, kind and caring girl with dreams of being a famous singer and dancer. She was in a relationship with a guy named Stephen which went well until Becky came home and caught her friend Ashley performing oral sex on Stephen, learning that they have been having an affair behind her back and that Stephen hated her singing and dancing. Becky writes down all of the qualities of his perfect girl and circles video games, purchasing a PlayStation 3 and Call of Duty in the hopes of winning her ex back. Much like Aaron, Becky became addicted to the game, changing her personality drastically in the next three days as she became agressive, foul-mouthed and lazy. She refused to forgive Ashley and rejected Stephen's attempt to date again, saying that she would never date someone who sucks at Call of Duty and that Ashley had mouth herpes, announcing that she is now going by Becka.

Stamina: Above Average (Able to keep up with Aaron on their very long gaming sessions, often outplaying him)

Retrieved from "https://vsbattles.fandom.com/wiki/Becka?oldid=5794977"
Community content is available under CC-BY-SA unless otherwise noted.