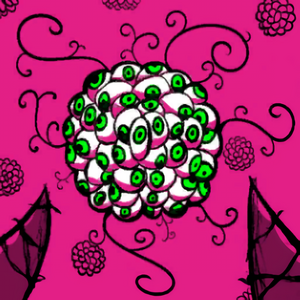 Beauty and the Beast (F-02-44) is a four-legged TETH class Abnormality covered in brown fur. It has two downward-curled horns with round, magenta flowers sprouting from them, set of mandibles with large number of green eyes covered it face, two black hind legs similar to a cricket, and two forelegs with four-toed, red-tipped feet. It also has a black underbelly, stumped tail and two red curved lines on its side. Its right foreleg is partially black with flecks of color. Beauty and the Beast's name is an reference to the French fairy tale written by Gabrielle-Suzanne Barbot de Villeneuve. This Abnormality was once a regular human being who turned into an Abnormality from the result of a curse.

Age: Unknown. Either Female or Male depending on its last victim

Powers and Abilities: Superhuman Physical Characteristics, Longevity, Mind Manipulation, Madness Manipulation, Fear Manipulation (Passively inflicts fear into those who see it. Can attack the mind and drive people to insanity), Regeneration (Mid-High, possibly High. Can regenerate from being turned into ashes. Possibly comparable to WhiteNight), Immortality (Types 6. Anyone who kills it will gradually transform into the beast), Resistance to Mind Manipulation (As an Abnormality, it should be able resist the passive fear aura of other Abnormalities), Energy Manipulation (Can produce Enkephalin), limited Resistance to Power Nullification (Can eventually break through the Qliphoth Detterance, which drains abnormalities of their power)

Attack Potency: Unknown, possibly Large Building level (Not shown to attack directly, though it's mostly due to lacking intention to do so, as its E.G.O. Weapon "Horn", which borrows a portion of the Abnormality's power, possesses RED Type damage that can damage beings like Complete Food and other TETH class Abnormalities)

Stamina: High (Can take several continuous beatdowns from employees, even when it itself desires to perish)

Standard Equipment: None by itself, although it can produce E.G.O. Equipment

Intelligence: Average (Was formerly a regular human being). Varies depending on the curse's host upon dying

Weaknesses: Hates itself and will try to get others to kill itself, however its curse will imprint the same mentality upon those who do manage to kill it, transforming into the very same beast

Retrieved from "https://vsbattles.fandom.com/wiki/Beauty_and_the_Beast_(Lobotomy_Corporation)?oldid=6409699"
Community content is available under CC-BY-SA unless otherwise noted.