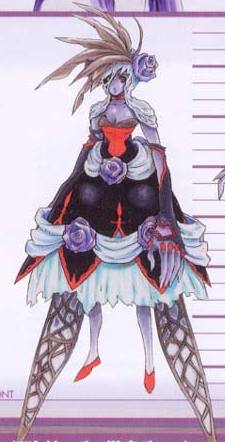 Beatrice is a Dream Demon in the Wild Arms franchise and the main antagonist of Wild Arms 3. Hailing from the Collective Unconscious in the 25th dimension, her desire is to create a Filgaia in which she can live freely, even if it means destroying the existing Filgaia in order to do so. Beatrice is a being of immense power and represents the ultimate threat to Filgaia at the end of Wild Arms 3, eventually becoming the "Mother" of Nega Filgaia and merging with it to ultimately become the negative side to all there is in existence.

To this end, Beatrice orchestrated the majority of the events in the history for over a hundred years, manipulating others' actions through their dreams, minds and memories even without direct physical intervention with the world.

All made in order to make her dream a reality, Beatrice's machinations were complex enough to involve not only the world restoration project of the past but also the main characters of the story a century later, along with the Prophets and even their leader - a fellow Demon, Siegfried - as well as their supporting factions such as the Ark of Destiny. She promptly disposes of those who serve no further need in her plans - either by setting them up to destroy each other (such as Janus and the Prophets or Siegfried and Virginia's companions) or by twisting their minds as she did with Malik.

Beatrice goes as far as manipulating Shane and Lamium for years by giving them prophetic dreams and turning them into unwitting pawns of her designs, before eventually possessing the former and murdering the latter prior to her final confrontation with Virginia Maxwell and her comrades.

As she gives birth to and becomes Nega Filgaia, merging with it as an extension of her will, Beatrice ultimately ends as the negative counterpart to reality.

Powers and Abilities: Superhuman Physical Characteristics, Immortality (Types 1 and 9, her true form dwells in the Electrical Sea of the 25th Dimension), Dark Matter Manipulation (Can also disperse someone's body down to the molecular level with the Dark Matter spell), Size Enhancement (Can grow larger than the planet), Biological Manipulation (Can create lifeforms or even a whole planet as a single lifeform. Can also manipulate Evolution), Creation (Can create a planet or other beings from memories), Regeneration (High-Godly. Came back after being destroyed alongside all of Filgaia's Reality and the Dream World as well as its notions alongside the 25th Dimension), Dimensional Teleportation, Conceptual Manipulation (Became the embodiment of all that is negative in the Reality of Filgaia and the Dream World), Existance Erasure (Can erase someone down to the concept of memory. Erased all of reality upon her death along with its notions such as positive and negative), Non-Corporeal (Exists as a non-corporeal being of pure information or memory in her usual manifestations), Empathic Manipulation (Manipulated the emotions of several characters), Non-Physical Interaction (Can interact with beings such as herself as well as other non-physical constructs or the guardians which are intangible forces of the planet), Mind Manipulation (Can manipulate and possess the minds of others from the World of Dreams), Memory Manipulation (Passively feeds on the memories of all other beings as Nega-Filgaia until they can't recall their reason for existing), Higher Dimensional Manipulation (Can manipulate the 25th Dimension to erase enemies from reality until they are a memory in the Horizon - an emulated void between Reality and the Dream World, can also seal them within a Cage of Eternal Darkness in the Dream World), Resistance Negation (Negated the Mental and Memory Resistance of Virginia and her companions as well as the people of the entire world, only failing to instantly kill them due to Lamium's last Memory), Status Effect Inducement (Can reduce one's physical or magical resistances, can induce paralysis or sleep), Summoning (Can summon the Seven Disasters and Tiamat, each capable of matching the power of the Guardian manifestations of the Planet. Can summon tentacles to aid her as Nega Filgaia), Vibration Manipulation (Via Sediment of the Stix), Power Bestowal and Statistics Amplification (Can grant herself resistances and increase her statistics at the same time), Elemental Manipulation (Of the Earth, Fire, Wind, Water, Ice, Light, Lightning and Darkness variations through the disasters, Arcana Disaster), Limited Resurrection (Nega Filgaia can revive its spawns), Gravity Manipulation, Petrification with the Petrify spell, Attack Reflection (Nega Filgaia can reflect Magic back to its sender), Pocket Reality Manipulation (via the Ars Magna and the Seyfert Microcosm skills), Holy Manipulation (with the Fatima's Miracle spell), Minor Probability Manipulation (via the Luck disaster), Time Rewind (via Reset, which returns the battle to its beginning, also negating statistics amplification), Limited Duplication, Transformation (Transformed herself several times) and Accelerated Development (As Nega Filgaia she rapidly matured and evolved from her embryo state to her ultimate form during the course of the decisive battle), Limited Reactive Evolution (Can become resistant to elemental attacks she suffers), Information Manipulation (Can manipulate the Hyades Information Lybrary which exists in the Horizon), Healing (Critical Heal recovers her for all damage she has taken), Energy Manipulation, Absorption (Can absorb energy and memories from other lifeforms) Immunity to Soul Manipulation (lacks a soul), unconventional Resistance to Memory and Mind manipulation (her mind exists on the same level of the Dream World itself and "rules over it", whereas for others she can make it be as a world of eternal darkness deep within their minds)

Attack Potency: Large Planet level (Appropriated the energy of the Yggdrasil System. Far superior to Jet, a human clone of Filgaia with comparable energy to all of the Planet. Far superior to each individual guardian, with just one of them being capable of causing an Eclipse in seconds. Superior to Siegfried who had access to all of the Planet's power with the Teardrop. Created Nega-Filgaia and even prior to merging with it, could grow large enough to hold the Planet in her hands)

Durability: Large Planet level (Took attacks from Virginia and her party at the endgame. Gave birth to and merged with Nega Filgaia which was the counterpart to the planet of Filgaia itself. Immortality and the nature of her being make her remarkably hard to kill)

Stamina: Limitless. Before merging with the Life Force of Nega Filgaia as a whole to become the negative side of existence and appropriating the power from several energy generators, Beatrice already outclassed Jet and Siegfried, the former having the same life-force as the planet itself and the latter being capable of channeling a comparable amount of energy to keep fighting at his best condition for as long as he held the Teardrop.

Range: Low Multiversal (After circumventing her limitations, her powers as Nega Filgaia can fully reach and interact, she can reach across from the Dream World to Reality and different dimensions such as 25th Dimension which are Spatio-temporal ones. As she became the negative aspect to all of existence, her destruction caused the collapse of all of existence into nothingness along with her and the Dream World itself, leaving only the Horizon - an emulator zone where the concept of memories was all that was left of existence. Can also reach others within dreams, minds, memories or a world of information.)

Intelligence: Extraordinary Genius. Manipulated nearly every character in the series, including the Prophets who were capable of producing advanced life-forms and technology with Nanomachines. Is more knowledgeable of the worlds than the Baskars and the Guardians who are the force and manifestations of the planet itself. Controls the disasters who are the counterparts to the guardians. Created Nega Filgaia from memories and her own knowledge. Orchestrated a plan spanning over a century of machinations and manipulations. Fully understands the Information Library of Hyades, which even the Prophets and the Council of Seven couldn't use to full capacity and had memories of all. Knows the method to restore and recreate memories with a thought, an effort that took the Council of Seven (which was composed of the best researchers of science and magical fields in the world) nearly a century to theorize, much less put into practice. Has a better understanding of Ancient Artifacts and energy sources than Siegfried himself, manipulating her felow demon like a puppet as well.