VS Battles Wiki
Register
Don't have an account?
Sign In
Advertisement
in: Characters, Umineko no Naku Koro ni, When They Cry,
and 120 more 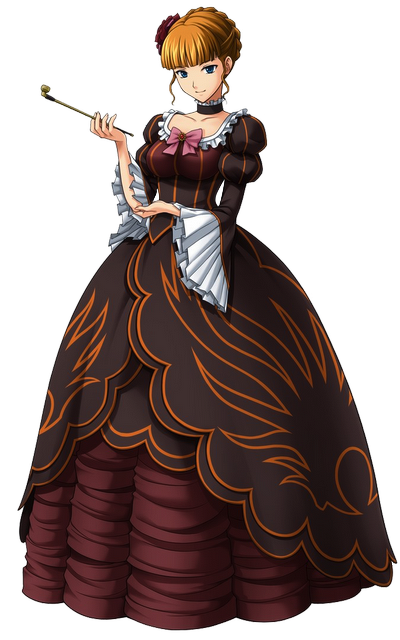 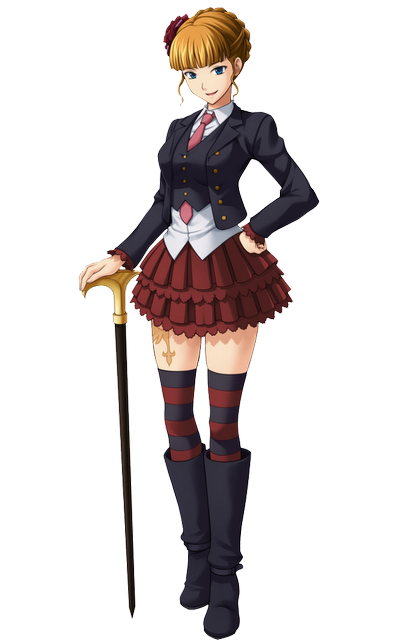 Beatrice is the main antagonist of Episodes 1-4. She clashes with Battler Ushiromiya, trying to convince him that witches are real and that she used magic to execute a series of bizarre murders on the island of Rokkenjima. She claims to have lived for over a thousand years. She has already strayed from the domain of humans, and it is said that as demons do, she appears when summoned by a human and lends him her power for a compensation of equivalent value. She likes black tea and ice cream and hates boredom and people who deny her.

All previous abilities to greater extents, Reality Warping, Resurrection, Higher-Dimensional Manipulation (Can manipulate Kakera, which contain infinite possibilities and higher dimensions), Shapeshifting, Reactive Evolution and Adaptation (All of the higher layers exist on the background of the Sea of Nothingness, and the beings of the higher layers may exists directly within this sea, and they adapt to the pressure due to mental and spiritual evolution), Avatar Creation, Self-Sustenance (1, 2 and 3), Non-Physical Interaction, Acausality (Type 5. Exists outside the concepts of fate, possibilities, space-time and causality), Large Size (Type 10), Immortality (Types 1, 3, 4 and 8 [Her existance is reliant on Ange]), Regeneration (High-Godly. Even if the entirety of her existence is completely erased and lost to the Sea of Nothingness beyond all layers and stories, she can regain her form just by thinking), Fusionism, Time Manipulation, Spatial Manipulation, Cosmic Awareness, Fate Manipulation, Causality Manipulation, Plot Manipulation, Probability Manipulation (Kakeras are like books and works of fiction to beings of the Higher Worlds, and by using them to create worlds, the world's events and fate is set in stone. Can manipulate the fate, plots, possibilities and space-time of Kakera), Void Manipulation, Conceptual Manipulation (Type 1), Quantum Manipulation, Mind Manipulation and Soul Manipulation (Can manipulate the voids of nothingness of Kakera, as well as it's conceptual, mental and spiritual realms. Lives in the Higher World, were the concepts of fate and possibilities are vizualized in the form of Kakera, which she can manipulate at will. Can manipulate the concepts of the Human Domain, which are visualized as physical objects on his level of existence, and can create several concepts on the level of a higher-order world, such as gravity, out of his thoughts), Law Manipulation (Beings of Higher Worlds can create specific rules within their gameboard, such as Beatrice making the Anti Magic Toxin rule), Nonexistent Physiology (Type 2; Their essence beyond the physical form is a void that only takes shape when they think about it), Resistance to Mind Manipulation, Soul Manipulation, Void Manipulation and Conceptual Manipulation (Meta-World beings are defined by their thoughts as a conceptualized form and are able to resist conceptual attacks on their identity to a degree)

All previous except Type 8 immortality, Law Manipulation (Permission to attack the Game Master is needed for it to even happen), BFR (Can take pieces in and out of the Gameboard at will), Information Manipulation, Life Manipulation (Battler rebirthed Beatrice into a new body after her death, though he was unable to recover her previous memories and experiences. Other Game Masters should be capable of the same), Reality Warping (Reshaped parts of the Meta-World into a replica of Rokkenjima and shapes the Golden Land with her thoughts), Soul Manipulation (Pieces brought to the Meta-World are inanimate wax dolls unless the Game Master chooses to give them souls and allow them to speak), Power Bestowal (Can allow opponents to use Truths, as well as remove their access to them), Power Nullification, Cloth Manipulation, Subjective Reality (Could have rewritten the tale of the Rokkenjima Serial Murders so that it was all just a dream)

All previous powers and abilities, with an existence superior to the entire infinite hierarchy of higher layers.

Attack Potency: Varies from Human level physically, Building level with Weaker Magic (Can summon and attack with lightning bolts. Her summons are around this level), Island level, likely Moon level to High Universe level with Stronger Magic (Stated she or Virgilia could destroy the entirety of Rokkenjima. Created the thyphon that spans across the entire island, and should scale to Eva Beatrice who can create a several kilometer ocean as deep as the Mariana Trench. Stated she could destroy the moon and should be comparable to the Chiesta Sister's weapon, that can destroy a asteroid. The creation of Mariage Sorciage gave her and Maria literally infinite power) to Low Complex Multiverse level (Accessed a higher layer of the chessboard beyond the physical world, which is stated to include 5-dimensional space, and fought against a held back Dlanor and the Eiserne Jungfrau while in this state), potentially High Hyperverse level with Endless Magic (Endless Magic is said to have control over an individual's journey through the infinite layers of the sea of fragments, being potentially capable of granting infinite evolution through all of its endeavors to a lower-order being when paired with Maria's Magic of Origins) | Complex Multiverse level (Exists in the Meta-World, a higher realm of existence from which the entire Human Domain is regarded as fiction and its inhabitants are seen as pieces laid on a chessboard, their fates and lives merely small fragments which can be manipulated and physically interacted with even by normal humans inhabiting this perspective. This includes structures such as the Underside of the Chessboard, a void of nothingness completely lacking space and time which resides "nowhere" in relation to the entire world of the pieces) to High Complex Multiverse level (Can manifest in a layer above the Meta-World, in which she stands superimposed over the scenery and perceives events there as frozen in time. Can access the Golden Land, which is stated to exist on an even higher level than all of the above), potentially High Hyperverse level with Endless Magic | Hyperverse level (As the Game Master and Territory Lord, she embodies her gameboard and exists within a higher layer than everything else within it, including the previously mentioned Golden Land and the local Sea of Fragments that sees it as fiction), potentially High Hyperverse level with Endless Magic | Hyperverse level (Manifested in the City of Books, one of the highest realm in the World of Witches, above the majority of the infinite layers of existence leading to the Creator Domain, containing countless books and stories, a single one of which could record all of Umineko, with the lives of individual characters taking up little more than a single line), potentially High Hyperverse level with Endless Magic | Hyperverse level, potentially High Hyperverse level with Endless Magic, will eventually become far higher (Would completely transcend the Witch's Domain, quickly ascending and evolving through the last steps of the infinite ladder and eventually reaching Featherine's level of existence)

Speed: Varies from Massively Hypersonic+ (Dodged and outsped lightning in her battle against Virgilia), possibly Infinite (Upon gaining the rank of Endless Sorcerer, Battler surpassed the concept of distance in the layer of existence he was in. Beatrice should be capable of the same) to Immeasurable (Fought in a higher world from which the flow of time in the material world was perceived as stopped) | Immeasurable (Freed from all of the material world's restrictions, and transcends even realms devoid of space and time entirely such as Gaap's Abyss) | Immeasurable (Comparable to Game Master Battler, whose movements completely surpassed the concepts of speed and distance even on his own level of existence, and were beyond the comprehension of humans manifested in the Meta-World) | Immeasurable (Exists in one of the highest realm in the World of Witches, above the majority of the infinite layers of existence leading to the Creator Domain) | Immeasurable, will eventually become Irrelevant

Stamina: Functionally limitless | Limitless, has no requirements other than the desire to exist

Standard Equipment: Her pipe, which she can transform into a sword at will, countless goat servants | Her own realm

Intelligence: Supergenius; The mastermind behind most of the major events, and plotted all the entire crimes in Rokkenjima. The greatest student of Virgilia and a great alchemist, a good psychologist and actor. Even amongst other witches and higher beings, she is considered a genius for creating her catbox, which contains infinite possibilities. Solved the infinite mysteries of the Gameboard at the end of Chapter 8

Weaknesses: Somewhat overconfident and arrogant. High concentrations of anti-magic toxins are deadly to her. Cannot create something from 0, or reach the Golden Land without Maria. If her Golden Heart is destroyed, she will be truly dead, though this is much easier said than done. Her magic depends on her faith in it. The limitations of her territory | Boredom, and the possibility of losing the will to continue. Inability to leave her realm | She did not receive this degree of power until she believes in it.

Endless Magic: The signature magical system utilized by the Endless Witch, whose foundations lie upon the concept of infinity, be it as an endless repetition or an infinite expansion, hence allowing him to revert anything back to its original state by making them remember the form which they used to hold, repairing broken objects and resurrecting people from the dead, as well as allowing Beatrice to recover from fatal injuries by rewinding his body back to its original state, and creating infinity out of any number so long as it is not 0, modifying finite quantities so that they expand infinitely.

However, the true basis and source of Endless Magic lies on the concept of a "a cat in a box", that is, an unobserved entity of infinite variation whose uncertain existence makes it so all possible interpretations of them are equally valid and impossible to be denied, causing it to be the root of infinite possibilities and scenarios. Thus, the Endless Witch is akin to a storyteller who weaves infinite tales and stories, shaping their own worlds and controlling the infinitely-stretching possibilities contained in their catbox.

Game Master: As Game Master, Beatrice exists on a higher plane of existence than everything else in her territory, and the world shapes itself to her will under this state, with even attacking her through conventional means being impossible without her direct permission, and she can similarly decide who enters and who leaves it. In addition, she can weave stories and tales on a far more advanced scale than other higher-order beings, being able to manipulate countless fragments to piece together her own plotline, as well as rewriting the resulting structure at will.

Truths: Special moves utilized in debates between Witches and Humans taking place in the Meta-World, being statements denoted by specific colors which often manifest as conceptual weapons that directly target the enemy's very existence in an attempt to deny it, and are thus impossible to physically avoid, forcing opponents to counter the attacker's arguments with another truth. As the damage dealt by the Truths is conceptual, rather than strictly physical, they completely bypass conventional durability and allow Beatrice to skewer and even kill opponents much more powerful than herself.