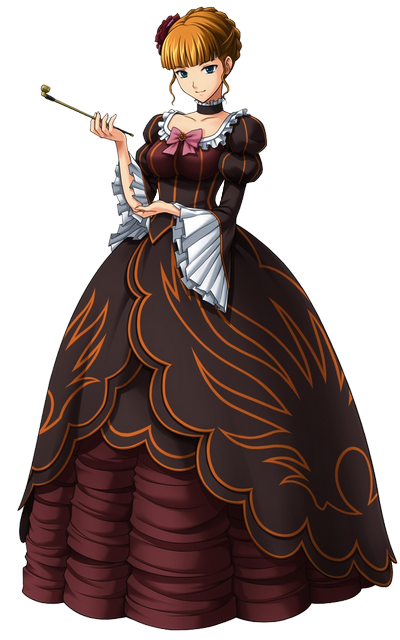 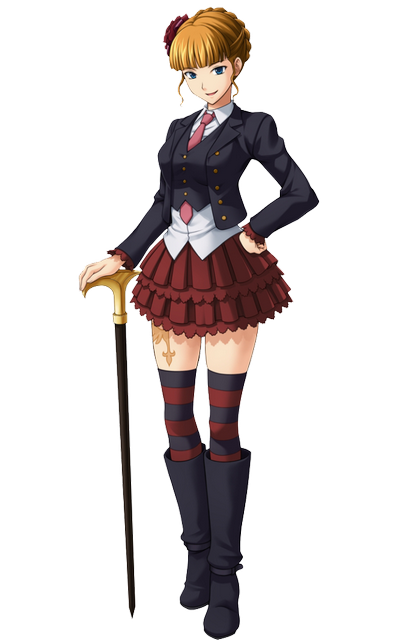 Beatrice (ベアトリーチェ, Beatorīche) is the main antagonist of Episodes 1-4. She clashes with Battler Ushiromiya, trying to convince him that witches are real and that she used magic to execute a series of bizarre murders on the island of Rokkenjima. She claims to have lived for over a thousand years. She has already strayed from the domain of humans, and it is said that as demons do, she appears when summoned by a human and lends him her power for a compensation of equivalent value. She likes black tea and ice cream and hates boredom and people who deny her.

Powers and Abilities: Superhuman Physical Characteristics, Higher-Dimensional Existence, Large Size (Type 10), Weapon Mastery (swords, guns and explosives), Genius Intelligence, Enhanced Senses (many forms, including soul vision and mind reading), Magic, Flight, Invisibility, Intangibility, Non-Corporeal, Acausality (Type 5), Body Control, Status Effect Inducement, Illusion Creation, Telekinesis, Telepathy, Teleportation, Summoning, Immortality (Types 1, 3 and 8), Regeneration (Mid-Godly), Reality Warping, Higher-Dimensional Manipulation, Matter Manipulation, Energy Manipulation, Projection, and Forcefield creation, Electricity Manipulation, Darkness Manipulation, Spatial and Pocket Reality Manipulation, Time Manipulation, Soul Manipulation, Possession and Absorption, Conceptual Manipulation and Resistance, Life and Death Manipulation, Mind Manipulation, and Control, Biological Manipulation and Healing, Empathic Manipulation, Dream Manipulation, Physical Law Manipulation and Negation, Number (from 1 to ∞) and Size Manipulation | All previous powers and abilities transferred to a higher layer of existence (beyond lower world comprehension and description) where concepts are visualized; Lower layer world, their fate and plot (including the time and space of the universes, mental, spiritual and conceptual realms, higher dimensions, nothingness, non-dualism, the planes with no space and time, and endless possibilities and impossibilities in the context of all this) are considered as a nothing more than a fiction and manifested in the form of crystals (Kakera), books and chessboards that even exalted regular humans can manipulate via just their hands, but a witch can create the worlds, and rewrite the plot itself in a far more advanced manner; All of the higher layers exist on the background of the Sea of Nothingness, and the beings of the higher layers may exists directly within this sea, and they adapt to the pressure due to mental and spiritual evolution, even if their bodies and souls will be erased to nothing beyond the entire infinite hierarchy of stories and dimensions, they can still return (high-godly regeneration) if they continue to think and determine their forms (a single being can have several bodily manifestations simultaneously); Beatrice controls and embodies her own realm with multiple higher layers, Mystery and Truth Manipulation | All previous powers and abilities, with an existence superior to the entire infinite hierarchy of higher layers, Beyond-Dimensional Existence (Type 2), Large Size (Type 11).

Attack Potency: At least Complex Multiverse level (She contributed to the formation of the magical compendium from which endless possibilities were generated, and she is consistently depicted as being superior to Piece Maria, Her Endless Magic can match the Magic of Miracles that is able to rewrite the script of the world, including the fates of higher-dimensional beings) | At least High Complex Multiverse level to Hyperverse level with the ability to affect Outerversal structures | Outerverse level (Transcended the infinite dimensional World of witches and was quickly approaching Featherine's level of existence)

Speed: Infinite for lower world physical manifestation (Fought Piece Battler and Dlanor though she can also stop the flow of time, and is able to exist within a realm wherein there are no concepts of time and distance) | Immeasurable to Irrelevant (Able to exist within the Sea of Nothingness that is beyond stories and dimensions) | Irrelevant

Durability: At least Complex Multiverse level. Possibly higher due to her conceptual, non-corporeal nature (Embodies the essence of infinity and nothing, making her virtually impossible to destroy even to someone who is equal to her such as Eva-Beatrice. Killing her was likened to that of throwing a rock at the moon in hopes of destroying it: impossible. Though she needed to manifest like a moon's reflection on surface water, her manifestation may be disturbed for some time, but not destroyed) | At least High Complex Multiverse level to Hyperverse level for her manifestation, Outerverse level for her fundamental nature/via regeneration | Outerverse level

Stamina: Functionally limitless | Limitless, has no requirements other than the desire to exist

Standard Equipment: Her pipe, which she can transform into a sword at will, countless goat servants | Her own realm

Intelligence: Genius; The mastermind behind most of the major events, and plotting the entire Uminekoverse, the greatest student of Virgilia and a great alchemist, a good psychologist and actor. Even amongst other witches and higher beings, she is considered a genius for her unique catbox where endless possibilities lie.

Weaknesses: Somewhat overconfident and arrogant. High concentrations of anti-magic toxins are deadly to her. Cannot create something from 0, or reach the Golden Land without Maria. If her Golden Heart is destroyed, she will be truly dead, though this is much easier said than done. Her magic depends on her faith in it. The limitations of her territory | Boredom, and the possibility of losing the will to continue. Inability to leave her realm | She did not receive this degree of power until she believes in it.

Endless Magic: Beatrice's magic. It has the power to infinitely restore a destroyed or broken object, or make something infinitely expand, or change the value of 1 to infinity.

Game Master: Beatrice is the Game Master of her tale, and with this rank, she knows everything within Rokkenjima, as she created it all. She can reach a higher plane of existence in the Golden Land. Whenever Beatrice creates a game, she weaves it from the endless sea of fragments, and each fragment contains infinite possibilities and higher dimensions. A new game is a new universe.

Truths: Truths are moves used in debates between humans and witches. Although they are arguments, they usually take the form of powerful conceptual weapons that damages the concept of her target. Because truth is a conceptual move, it cannot be avoided but can be confronted with other truths.