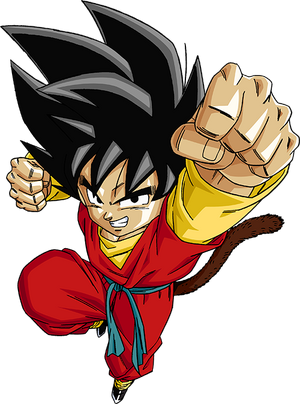 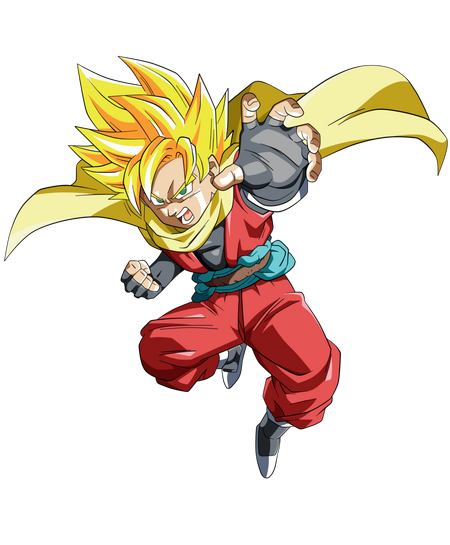 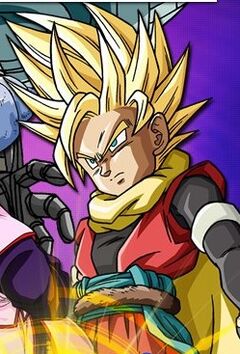 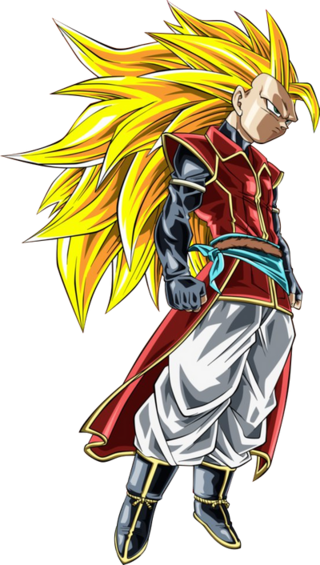 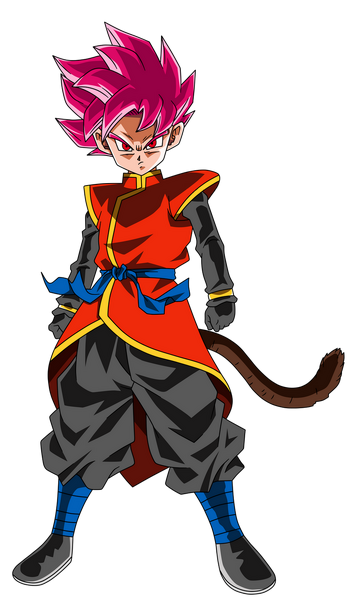 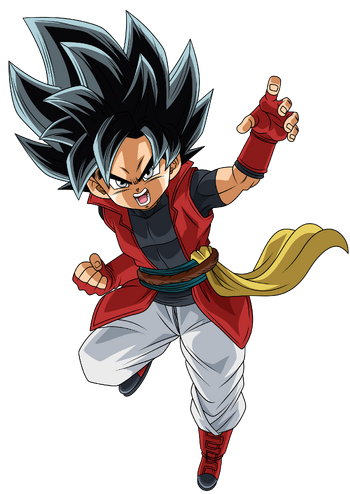 Beat (ビート, Bīto), the Saiyan Hero, is an Earthling from Satan City who utilizes the advanced time travel technology of the Dragon Ball Heroes machines, allowing him to become a Saiyan.

Powers and Abilities:  Summoning (Uses a deck of cards to summon other Dragon Ball characters), Time Travel (via DBH machines), Dimensional Travel (Via DBH machines), Avatar Creation | All previous, Superhuman Physical Characteristics, Master Martial Artist, Ki Manipulation (Can be used defensively and offensively, to strengthen his skin or to fire ki blasts, which can home in on targets, and form Defensive Barriers that render Absorption ineffective), Ki Sensing (Can locate others by reading their ki), Enhanced Senses (Saiyans have exceptional senses, allowing them to locate small, distant objects by tracking their smell, see clearly over long distances, and track the movements of others even in pitch black conditions by feeling vibrations in the air), Flight, Afterimage Creation, Power Mimicry (Can easily replicate other Ki-based techniques after seeing them once), Teleportation, Reactive Power Level (As a Saiyan, Beat grows stronger every time he fights and can become stronger in the midst of combat, vastly increasing in strength whenever he is mortally injured), Transformation (Can transform into a Super Saiyan, increasing his capabilities drastically), Can possibly create dimensional rifts and destroy space-time and pocket dimensions with his energy via powerscaling | All previous abilities enhanced, Absorption, Life-Force Absorption (Using "Draw", he can damage opponents by sucking out their life energy, which he can then use to heal himself), Information Analysis, Spatial Manipulation (Anyone with God Ki can open holes in space to summon meteors. Can create his own space/dimension), Pocket Reality Manipulation, Statistics Amplification, Rage Power, Heat Generation, Reactive Evolution, Damage Reduction, Can reduce enemy's Damage Reduction by 50%, Energy / Ki Absorption and Regeneration (Mid-Low) as a Super Saiyan God and Blue, Fusionism (Via Fusion Dance), Purification (Can purify Dark Demonic energy), Resistance to Extreme Cold, Cosmic Radiations, Absorption, Sleep Manipulation, Heat Manipulation, Electricity Manipulation, Existence Erasure, Empathic Manipulation, Extrasensory Perception (Cannot be sensed by beings lesser than a God), Soul Manipulation, Mind Manipulation, Magic, Law Manipulation, Physics Manipulation, Gravity Manipulation (Via God-Ki, which grants resistances to Demon God Magic), Time Manipulation, Morality Manipulation, Possession, Madness Manipulation (Type 2), Corruption (Able to resist the effects of dark energy), Unholy Manipulation (Immune to Demon God Magic), Power Nullification (Beings with divinity cannot be affected by Android 21's waves, which can nullify powers), and Memory Manipulation (Android 21's waves have also shown to be able to erase memories)

Attack Potency: Human level | Multiverse level+  (Defeated Oceanus Shenron, one of the Shadow Dragons that contributed to almost destroying infinite diverging timelines and breaking into the Real World. Defeated Great Ape Broly with a Spirit Bomb who in turn defeated all of the Shadow Dragons as a SSJ4) | Multiverse level+ (As a Super Saiyan God, he was comparable to base Xeno Goku. Got even stronger from there and could fight alongside Super Saiyan 4 Xeno Goku. Eventually unlocked Super Saiyan Blue)

Standard Equipment: Deck - Beat usually uses a set of Saiyan characters, usually members of Goku or Vegeta's families, though he occasionally uses Frieza and Cooler as well. He has used Goku, Vegeta, Trunks, Gogeta, Gohan, Pan, Bardock, and Gotenks in their various incarnations and forms; he also uses Luud and the Hero Robot as allies

Weaknesses:  He cannot survive in the vacuum of space. Super Saiyan 3 drains his ki rapidly and will exhaust him within only a few minutes.

Saiyan Physiology: The physiology of a Saiyan, an aggressive warrior race of conquerors. Saiyans have the natural ability to control ki and to fly,  One of the most powerful abilities of a Saiyan is their ability to grow stronger and stronger through combat, allowing Beat to constantly push his own limits during a fight and rise to higher and higher peaks in power. This ability grants a substantial boost in power when Beat is badly injured, allowing him to reach a whole new level of power once he recovers.