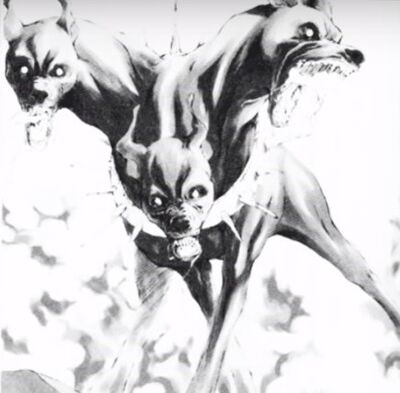 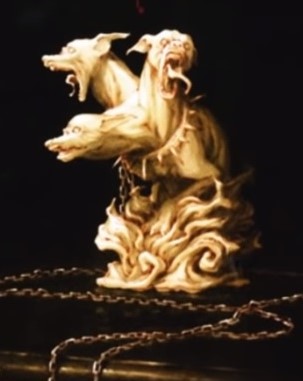 The Beastheads was a demon created by Mundus, which can see the past, present, and future. It possesses the ability to show the future to any human which touches it; however, this often drives the human insane. It was one of the antagonists in Devil May Cry Volume 2.

Superhuman Physical Characteristics, Immortality (Type 1), Self-Sustenance (Type 2), Demonic Energy Manipulation, Reality Warping (For both forms), Unholy Manipulation, BFR, Space-Time Manipulation, Likely Possession (Scales from the weaker demons, who have all shown multiple times to be able to possess inanimate and living things), Weather Manipulation (For both forms, can casually alter the weather and create storms), Large Size (Type 2 for Demon Form), Telepathy, Flight, Possibly Passive Physics Manipulation (The laws of physics reacted and "wrestled" due to it existing), Fear Manipulation and Empowerment (The mere presence of demons causes fear, can also feed off despair and get stronger from it), Resistance to Reality Warping, Transmutation, Size Manipulation and Petrification (As a demon, it should be able to resist the assimilation process), Soul Manipulation (Scales from other demons, who can handle going through the crust of the demon world, which is stated to turn souls into monsters), Corruption (Type 3. Can breathe on demonic air, which turns normal people into monsters), Madness Manipulation (Type 3, endured being in the Demon World, which causes despair and insanity), Energy Absorption (Unaffected by Chen's magic absorption gel), Disease Manipulation (Approaching the Demon World, being inside or near a Demon World nexus causes "unearthly illness" which makes it difficult to concentrate and causes intense nausea and dizziness) and Fear Manipulation (Feeds of despair, can be around other demons, and their presence can cause fear)

All previous abilities, Power Mimicry (Chen copied Sparda's swordsmanship by viewing the past), Passive Heat Manipulation (Chen caused a room's temperature to plummet), Weapon Creation (Chen created a replica of Sparda although it's unknown if it had the original's abilities), Immortality (type 2), Teleportation, Telekinesis, Reactive Power Level, Aura, Fear Manipulation, Transmutation, Biological Manipulation, Petrification, Statistics Amplification, Fate Manipulation (Gives the user amazing luck and the more the user believes in the Beastheads' power, the stronger the luck is which leads to the Beastheads manipulating reality to benefit the user), Precognition (Gives the user the ability to see accurate future events and also does the opposite by allowing the user to past events throughout history), Soul Manipulation (Part of the transmutation process)

Attack Potency: City level (Repeatedly changed the weather and covered the sky with storms, fought with Dante and Beryl, should be at least comparable to Mundus Generals like Griffon) | Varies from City level to Universe level, possibly Universe level+ depending on the host (Normal hosts scale to the Demon Form. When Chen became the host for the Beastheads Statue Form, he posed as a threat to Dante, who was, at that time, already capable of defeating Mundus)

Lifting Strength: At least Class 5 (Superior to Temen-ni-Gru Guardians) | Below Average by itself, Varies from at least Class 5 to Class G depending on the host (Chen was comparable to Dante)

Striking Strength: City Class | Below Average Class by itself, Varies from City Class to Universal, possibly Universal+ depending on the host

Durability: City level | Unknown by itself, Varies from City level to Universe level, possibly Universe level+ depending on the host (Chen was comparable to Dante and could took hits from him)

Stamina: High. Should at least scale to Mundus Generals like Griffon, superior to Temen-ni-Gru Guardians. | Varies depending on the host (Chen could fight Dante without tiring)

Range: Extended melee range, tens of kilometers with energy based attacks and weather manipulation in Demon Form or when having a host.

Start a Discussion Discussions about Beastheads (Devil May Cry)