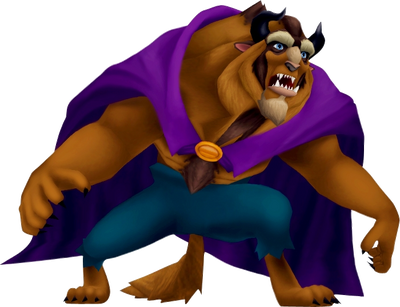 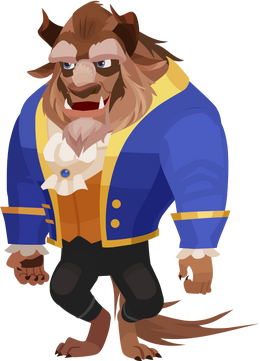 Beast is the cursed prince of the Beast's Castle world. Seeing Belle being lost alongside his world, he manages to go to Hollow Bastion by himself to rescue her.

Name: Adam (however, this is technically not his "actual name"), Beast, Prince

Powers and Abilities: Superhuman Physical Characteristics, Magic, Sound Manipulation (Can attack with his roars), Light Manipulation, Natural Weaponry, Damage Boost (Can restore his own Magic by taking damage, The Critical Plus ability increases the Beast's chance of landing critical hits), Can withstand an otherwise fatal hit (Via Second Chance), Statistics Amplification (Via various Accessories, Berserk increases Beast's attack power if he's at low health, Defender increases Beast's durability if he's at low health), Nonexistent Physiology Existence Erasure (Can cause Nobodies to fade from existence, which have Nonexistent Physiology), Dimensional Travel, Portal Creation (Can open a Corridor of Darkness to travel between different worlds or dimensions), Resistance to Absorption, Death Manipulation (Unaffected by Heartless, which passively kill and absorb things around them), Data Manipulation (Ansem The Wise stated that the "heart" cannot be contained by data, and that the process itself would be incalculable), Existence Erasure (Can take hits from Heartless), Curse Manipulation, Law Manipulation (Due to not being apart of the worlds he travels in, the Beast is unaffected by the laws of those worlds, such as when the curse medallion did nothing to Sora, Goofy, and Donald, despite the latter being greedy.), Darkness Manipulation, Cosmic Radiations, Corruption (Unaffected by the corrupting effects of the darkness of the Dark Corridors)

Attack Potency: At least Large Star level (Can keep up with Sora, Donald and Goofy. Can fight against opponents like Xemnas and Xaldin)

Speed: Massively FTL+ (Able to keep up with Sora and others)

Durability: At least Large Star level (Can take hits from Xemnas and Xaldin, took a powerful hit from Riku Replica with no issues)

Retrieved from "https://vsbattles.fandom.com/wiki/Beast_(Kingdom_Hearts)?oldid=6142680"
Community content is available under CC-BY-SA unless otherwise noted.