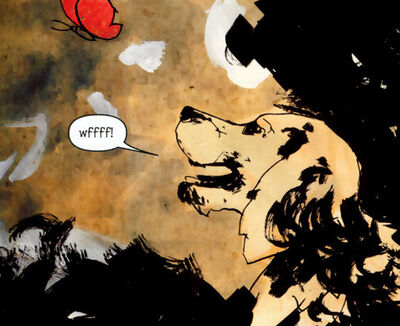 Bear is Kenneth Carter's pet and an invaluable helper when the pair end up trapped in the town of Silent Hill.

Powers and Abilities: Superhuman Physical Characteristics, Enhanced Senses (Most dogs can hear sounds up to 67 Hz and their nose can detect smell much easier than humans due to having more glands. Tapetum Lucidum grants enhanced eyesight at night time and other low-light conditions), Skilled in stealth, A lot of good luck, Summoning (A entire pack of Sniffer Dogs)

Attack Potency: Street level (A golden retriver like Bear can generate a bite force of 125 psi, Bear was able to subdue a entire pack of Sniffer Dogs, then he became the leader of their pack)

Intelligence: Fairly high by animal standards. Can quickly master commands and hand signs, on a specific moment before a witch can kill him, Bear pees on her boot and steals the Keris Dagger from her. Then he escaped through Silent Hill with the blade in his mouth.