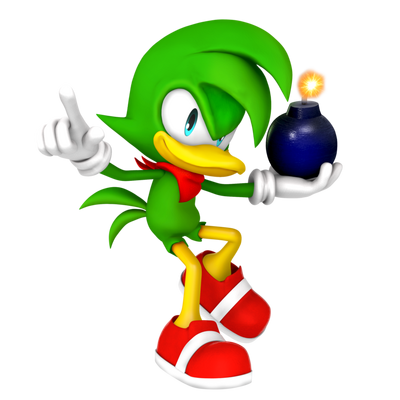 Bean the Dynamite is a playable character in Sonic the Fighters. He is an anthropomorphic woodpecker who competed in a fighting tournament for the Chaos Emeralds and the right to destroy the Death Egg II. In battle, Bean is capable of throwing endless amount of bombs for his amusement and defense.

Powers and Abilities: Superhuman Physical Characteristics, Self-Sustenance (Type 1), Can pull an endless amount of bombs out of nowhere, Explosion Manipulation (Via his bombs), Martial Arts, Forcefield Creation (Via barriers), Statistics Amplification (Can increase the speed of his attacks via Hyper Mode), Resistance to Extreme Cold and Cosmic Radiations

Speed: FTL (His agility rivals that of Classic Sonic)

Range: Standard melee range, tens of meters with his bombs.

Intelligence: Is a skilled combatant capable of going up against experienced fighters like Sonic and Knuckles. His combat style revolves around heavy utilization of his bombs, either throwing or kicking them into opponent. Apart from the use of bombs, Bean's secondary weapon is his beak which he can use to deliver a rapid flurry of jabs to his opponents.

Weaknesses: His explosives could backfire if they explode too close to him.

Retrieved from "https://vsbattles.fandom.com/wiki/Bean_the_Dynamite?oldid=6366986"
Community content is available under CC-BY-SA unless otherwise noted.