VS Battles Wiki
Register
Don't have an account?
Sign In
Advertisement
in: Characters, Nasuverse, Fate,
and 20 more 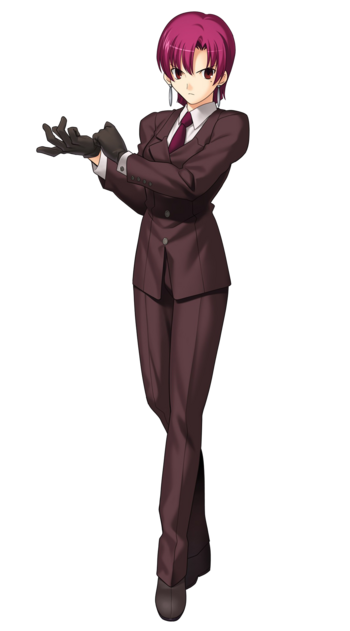 Bazett Fraga McRemitz was the original Master of Lancer during the Fifth Holy Grail War, having idolized him and his story since her youth. As a result, she became a magus to enter the Grail War and save him from his fate. However, soon after summoning him, she was quickly betrayed by her longtime comrade-in-arms, Kirei Kotomine, and left for dead after Kirei stole her arm and her Command Seals. However, her life is saved by Avenger, acting as his Master during the events of Fate/hollow ataraxia.

Tier: 9-A, Varies with Fragarach

Superhuman Physical Characteristics, Enhanced Senses, Limited Information Analysis, Master in Martial Arts, Rune Magic (Can be used to enhance her physical characteristics), Memory Manipulation, can Reverse time and causality to always strike first with a conceptual curse in response to her opponent's strongest attack with Fragarach

Attack Potency: Small Building level (Physically stronger than Kirei during the Fifth Holy Grail War and only lost because she was caught off guard, comparable to him and Kuzuki), Varies with Fragarach (Matches the opposing attack in strength and can kill Servants like Saber and Lancer under the right circumstances, but is much weaker when used otherwise)

Durability: Small Building level (Was incapacitated and nearly killed by Kirei when she let her guard down)

Intelligence: As a Sealing Designation Enforcer, Bazett is an expert when it comes to hunting down, subduing, and killing heretic magi. As a result, she would have been able to easily defeat Rin Tohsaka and Shirou Emiya in a direct battle without their Servants if she had participated in the Fifth Holy Grail War. In combat she is a close combat specialist, enhancing her physical condition with Reinforcement and Runes before pummeling her foes into submission, with her martial prowess being comparable to inhumanly capable hand-to-hand fighters such as Kirei Kotomine and Souichirou Kuzuki, who were able to defeat True Assassin and Saber with their respective techniques, albeit while the physical abilities of both men were bolstered by powerful magecraft on top of having the element of surprise.

Weaknesses: Fragarach can only be used against an opponent's strongest attack, which makes it useless against opponents with well-rounded, powerful abilities. It also has a limited amount of shots, as Bazett can only carry five with her at a time.

Fragarach: Gouging Sword of the War God: A Noble Phantasm and Mystic Code that was originally possessed by the war god Lugh, also known as Answerer: That Which comes Later Cuts First, and was passed down through the Fraga family over the centuries. While it is normally a mere D-Rank Noble Phantasm under normal circumstances, its true purpose is to counter her foe's trump card. When her foe uses their strongest attack, Bazett can prepare Fragarach to counter it, reversing time back to the moment immediately before they use that attack and instantly piercing the heart of the target involved with a conceptual curse. It not only reverses time, but also cause and effect, creating a contradictory effect.

However, Fragarach can only be used in this manner against the opponent's strongest attack and must be used directly after it. She can use it without it being in response to her opponent's strongest attack, but it is much weaker. Against opponents with continuously active, powerful abilities, it can be used again and again at full strength, but it is useless against opponents with well-rounded, powerful attacks, or those who simply don't use their strongest abilities. She can utilize it in its non-counter form three times in a row in a technique called Toole Fragarach: Gouging Great Sword of the War God in Fate/unlimited codes. Bazett can only carry up to five shots for Fragarach at a time.