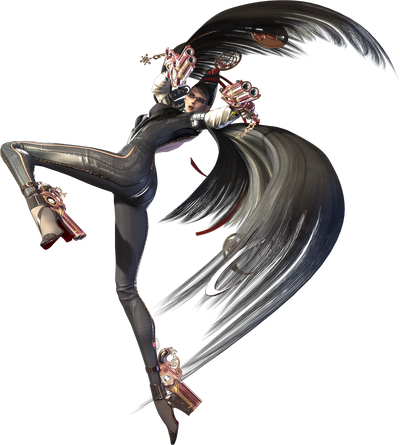 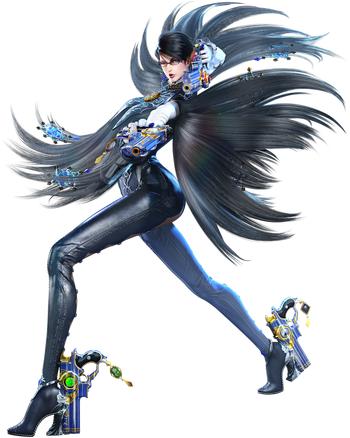 Bayonetta (real name Cereza), is a coquettish, mysterious Umbra Witch and the eponymous protagonist of the Bayonetta series. As suave as she is dangerous, she blasts her way through the armies of Paradiso and Inferno to recover the memories she lost after a five hundred year slumber, with her heritage and destiny as the Left Eye of the World dragging her into conflicts that will decide the fate of all three worlds.

Superhuman Physical Characteristics, Skilled in Hand-to-Hand Combatant, Can slow down time to a near stop, Weapon Mastery, Immortality (Type 1), Regeneration (Mid, Able to regenerate from being crushed flat), Enhanced Senses, Shapeshifting, Flight, Energy Projection, Forcefield Creation, Hair Manipulation, Telekinesis, Portal Creation, Teleportation and Time Travel via portals, Summoning, Magic, Technology Manipulation, Chain Manipulation, Homing Attack, Healing (Via Green Herb Lollipops and Red Hot Shot), Temporary Invulnerability (Via Yellow Moon Lollipops [this works up to Large Star level damage]), Can increase the power of her attacks (Via Bloody Rose Lollipop), Fire Manipulation (With Durga), Electricity Manipulation (With Durga), Ice Manipulation (With Odette), Soul Manipulation (With Shuraba), Can damage opponents on an atomic level (With Bazillions), Curse Manipulation (Onyx Roses' shells contains the curse of a fairies souls), Explosion Manipulation, Empathic Manipulation (With the Gaze of Despair she can make enemies go berserk), Damage Negation (Via Pulley's Butterfly), Attack Reflection (Via Moon of Mahaa-Kalaa), Duplication (Via Sergey's Lover), Can see things that are invisible, Dimensional Travel (Can enter the parallel universe of Purgatorio where she is invisible and intangible to beings outside the realm but can still affect the human world), Can BFR enemies with her summons, Can shatter magic barriers and seals (Via Infernal Kiss and Heart Shot), Non-Physical Interaction (Can harm and kill Non-Corporeal and Intangibility beings), Self-Sustenance (Type 1, Can survive underwater and in space), can walk on walls, Resistance to the following: Time Manipulation, Soul Manipulation (Resisted her soul being ripped out and consumed by Resentment, as well as her soul being absorbed by Alraune, should have a resistance comparable to Jeanne, whose soul was intact despite being absorbed over the course of several hours), Mind Manipulation/Madness Manipulation/Empathic Manipulation (Should have a resistance comparable to Jeanne, who was unaffected by Alraune's insanity inducing poison being injected into her soul for almost a full 24 hours, was able to resist the Dear and Decoration's love arrows as well as Sloth's swords), Curses (Able to use Alrauna without going insane, Should have a resistance comparable to Jeanne who is unaffected by the curse that her weapon Karen instills upon the user), Extreme Temperatures (Unfazed by arctic and volcanic temperatures), Acid Manipulation (Can tank Iustitia's acid attacks), Fear Manipulation (Can resist Fury' gaze, which instills fear so severe that the target becomes physically paralyzed), and Age Manipulation (Able to change herself back to her adult form after being turned into a child)

Attack Potency: At least Multi-Continent level (Defeated Fortitudo, Temperantia, Iustitia, and Sapientia, Defeated Father Balder, who casually killed Gomorrah and Scolopendra, Immensely more powerful than the likes of Gracious and Glorious), At least Multi-Continent level with Summons (Her weaker summons can easily tear apart Auditos, Hekatoncheir pummeled a weakened Temperantia to death) | Large Star level (Can fight and seriously injure Jubileus), Large Star level with Queen Sheba (Equal in power to Jubileus) | Large Star level (Fought on par with Loptr, Defeated Alraune while she was empowered by Jeanne's soul]), At least Large Star level, possibly far higher with Omne (More powerful than both Jubileus and Queen Sheba combined. Could possibly be comparable to Aesir, though this is unconfirmed)

Lifting Strength: Class K (Casually used a building as a weapon, Able to lift, swing, and throw Fortitudo, Casually caught a falling tram car with one hand) | At least Class K | Class T (Tossed an O'Neill cylindrical Space Colony, which weighs approximately 8.4525e+14 kg, after it was thrown at her)

Stamina: Very high, is only shown tiring after fighting beings as powerful as Jubileus and Aesir, even the Cardinal Virtues do little to slow her down even after fighting an army's worth of Angels.

Range: Extended melee range to hundreds of meters depending on her weapons, At least hundreds, likely thousands of kilometers with Witch Time and Summons

Intelligence: As the Left Eye of the World, Bayonetta was destined for greatness from the moment of her birth, becoming an incredibly skillful and powerful Umbra Witch. A master of the Bullet Arts, she effortlessly wields virtually any weapon she obtains as an extension of her own body, being able to wield up to four firearms with pinpoint accuracy with both her hands and feet as well as use a variety of whips, swords, chainsaws, scythes, and other melee equipment with ease. She is also an expert at hand-to-hand combat, matching both her Umbran Sister Jeanne and the Lumen Sage in close-quarters and going so far as to slice up the tentacles of Iustitia with her bare hands while suplexing Fortitudo during their battle. She also slaughters countless angels every day to maintain her many Faustian contracts with the demons she summons, being more worried about her Sunday dress than facing the totality of Paradiso's forces by the modern day. However, her vast experience and sadistic streak have made her overconfident at times, and thus she can be caught off guard when some can potentially match her in combat, such as Loptr and the Lumen Sage.