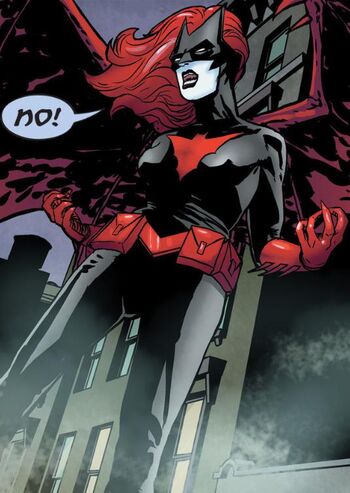 Katherine was turned into a vampire, most likely by Nocturna. Unable to control the thirst for blood, Katherine began to attack people. Eventually, she attacked Maggie Sawyer and was about to bite her until her sister, Elizabeth Kane, was able to rescue Maggie. After a long battle, Beth was able to drive a stake through Katherine's heart. Katherine then turns to ash as Beth cries for her sister.

Powers and Abilities: Superhuman Physical Characteristics, Expert Hand-to-Hand Combatant, Weapon Mastery, Enhanced Senses, Immortality (Type 1), Regeneration (Whatever damage a vampire does in fact suffer can be healed through the consumption of human blood), Clairvoyance, Telepathy, Mind Manipulation, Fire Manipulation, Flight, Transformation (Vampires often possess the ability to transform into a variety of creatures or effects such as bats, wolves, rats or even mist)

Attack Potency: At least Building level+ (Much stronger than her normal self. Easily killed Clayface, Ragman, and Jason Blood)

Speed: At least Massively Hypersonic (Much faster than her normal self)

Intelligence: Low, her mind got corrupted to the point that she acts like animals. But she still is highly-skilled figher.

Weaknesses: Can be killed by sunlight, and by a stake through the heart. Mentally unstable.

Retrieved from "https://vsbattles.fandom.com/wiki/Batwoman_(Futures_End)?oldid=5494339"
Community content is available under CC-BY-SA unless otherwise noted.