VS Battles Wiki
Register
Don't have an account?
Sign In
in: Characters, DC Animated Movies, Tier 9,
and 17 more 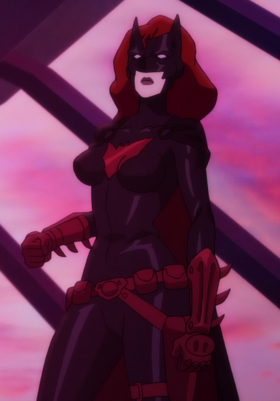 Katherine "Kate" Kane is the daughter of Colonel Jacob Kane and an ex-military soldier and the vigilante known as Batwoman who works alongside her father to fight crime. She would later join the Bat-Family. It was later discovered that the death of her mother and sister at the hands of criminals is what drove her to take up the role of an anti-hero.

Attack Potency: Wall level, possibly higher (Simultaneously fought Electrocutioner and Hellbound who can fight Batman. Was able to fight and hold her own against Talia al Ghul, who is comparable to her own son)

Speed: Supersonic (Can keep up with Talia al Ghul, who is comparable to Robin), higher with firearms

Intelligence: Genius, Batman complimented her skills as well as intelligence.

Weaknesses: Still a human and thus, can be killed by ordinary weapons. She tends to be overconfident, most often refusing to get help from those around her.