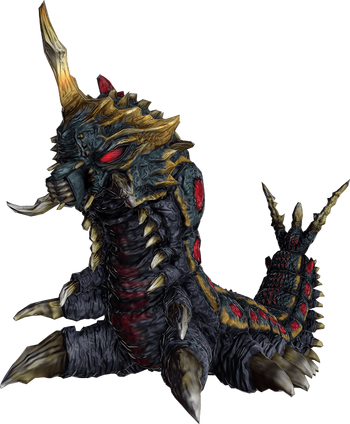 Battra (バトラ Batora) is a dark divine moth kaiju created by Toho that first appeared in the 1992 Godzilla film, Godzilla vs. Mothra. In the film, he was seen as a sort of "evil" counterpart to Mothra, at least early on.

Like Mothra, Battra has both larva and imago forms. Battra's imago form has a predominately black body with very large wings that have patterns of red, black and yellow. He also has yellow horns on his head, six legs, and red eyes which glow purple when firing his beam, as well as a red line which runs down his body's sides.

Attack Potency: Planet level (He was stated by the Cosmos twins to hold the power to destroy a huge asteroid that would destroy the Earth)

Range: At least hundreds of meters with Horn Laser and Prism Beams

Notes: Here it is a translation blog of the most relevant dialogues of Godzilla vs. Mothra (1993) film.