VS Battles Wiki
Register
Don't have an account?
Sign In
Advertisement
in: Tier 1, Tier Low 1-C, Tier 1-C,
and 93 more 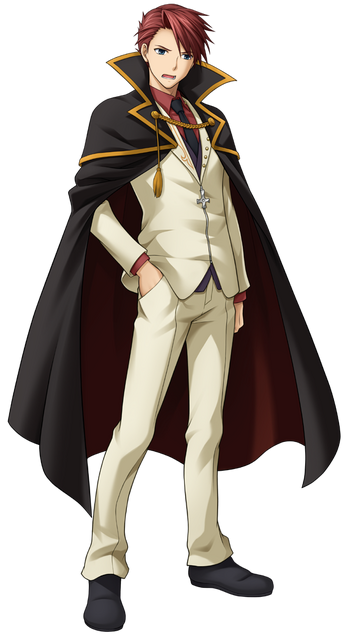 Battler Ushiromiya is the only son of Rudolf Ushiromiya, who has come to his family’s annual conference for the first time in the six years following the death of his mother, Asumu, and his father’s marriage to his second wife not long after. This makes him one of the eighteen people on Rokkenjima for the events of October 4th and 5th, 1986.

An avid reader of the mystery genre, Battler stubbornly refuses to acknowledge the existence of magic and opposes Beatrice throughout her gameboards, but comes to slowly understand the nature of her existence and the mystery she made for him to unravel.

Age: 18. Though he exists beyond the concept of time in his Meta-World incarnation.

Superhuman Physical Characteristics, Higher-Dimensional Manipulation, Immortality (Type 9. Exists as an avatar directly controlled by his higher self in the Meta-World, who can easily manifest again by putting his piece back into the chessboard), Electricity Manipulation (Manifested his Blue Truth as a lightning bolt), Large Size (Type 10), Higher-Dimensional Existence, Incorporeality, Acausality (Type 4), Invulnerability and Power Nullification with Endless Nine, Red and Blue Truths

All previous powers and abilities to far greater extents, as well as: Immortality (Types 1, 2, 3, 4 and 8 [His life and existence are both sustained by Beatrice as part of the world of her gameboard]), Regeneration (High-Godly. Capable of recovering and preserving his existence by maintaining his ability to think and remembering his own form, even if it is conceptually erased and sent to the nothingness beyond all stories and layers), Teleportation, Dimensional Travel (Can willfully manifest in various layers of existence, both higher and lower, adapting his own existence to the atmospheric pressure of higher worlds), Spatial Manipulation, Quantum Manipulation (Used the "Multiplanar World Collapsation" technique to deny that the battle between Beatrice and Virgilia happened in the first place, collapsing infinite possibilities into a single scenario where it never occured), Fate Manipulation, Void Manipulation, Mind Manipulation, Soul Manipulation, Plot Manipulation (Can manipulate kakera, which are crystallizations of lower worlds that record and contain infinite possibilities, as well as their fate and plot, encompassing higher dimensional structures alongside countless spiritual / mental realms, as well as nothingness devoid of space and time entirely), Astral Projection, Non-Physical Interaction, Reactive Evolution and Adaptation, Cosmic Awareness (Can look into infinite possibilities by touching kakera), Shapeshifting, Causality Manipulation (Controls the flow of cause and effect in the world of pieces, seeing its denizens as pawns on a game board and events as chess moves), Possession, Conceptual Manipulation (Type 1. Can manipulate the concepts of the Human Domain, which are visualized as physical objects on his level of existence, and create several concepts on the level of a higher-order world, such as gravity, out of his thoughts), Nonexistent Physiology (Type 2. Exists as an entity of nothingness at the core of his being, with his physical form being constructed and defined solely by his sense of self and identity), Resurrection (Can easily return from death by regaining his interest and will to live, as the concept of time does not exist in the higher domains. Resurrected after being killed by the Red Key, which negates the concept of revivals), Abstract Existence (Type 1), 4th Wall Awareness (Directly addressed the player during the EP 1 Tea Party), Light Manipulation, Incorporeality, Fusionism, Avatar Creation, Acausality (Type 5. Exists completely outside of the chessboard and is unrestrained by the limitations of the Human Domain, including that of fate, time and causality), Blue Truths, Resistance to Void Manipulation, Mind Manipulation, Soul Manipulation and Conceptual Manipulation (Meta-World beings are defined by their thoughts as a conceptualized form and are able to resist conceptual attacks on their identity to a degree)

All previous powers and abilities to immensely higher degrees, in addition to: Magic, Mathematics Manipulation, Size Manipulation, Duplication, Telekinesis, Resistance Negation, Law Manipulation, Probability Manipulation, BFR (Threatened to kick Bernkastel off of his game board, and almost fired EVA-Beatrice from Umineko altogether. Can take pieces in and out of the chess board at will), Information Manipulation, Life Manipulation (Rebirthed Beatrice into a new body after her death, though he was unable to recover her previous memories and experiences), Flight, Intangibility, Reality Warping (Reshaped parts of the Meta-World into a replica of Rokkenjima), Soul Manipulation (Pieces brought to the Meta-World are inanimate wax dolls unless the Game Master chooses to give them souls and allow them to speak), Sealing (Shackled Ange to her piece, preventing her from leaving his game. Encased the Book of the Single Truth in a crystal which only the Game Master could open), Power Bestowal (Can allow opponents to use Truths, as well as remove their access to them), Power Nullification, Cloth Manipulation, Subjective Reality (Could have rewritten the tale of the Rokkenjima Serial Murders so that they were all just a dream), Golden Truths, as well as all of Beatrice's powers

Attack Potency: Low Complex Multiverse level (Accessed a higher layer of the chessboard beyond the physical world, which is stated to include a 5-dimensional realm above the human world, and fought against a held back Dlanor alongside the Eiserne Jungfrau while in this state) | Complex Multiverse level (Exists in the Meta-World, a higher realm of existence from which the entire Human Domain is regarded as fiction and its inhabitants are seen as pieces laid on a chessboard, their fates and lives merely small fragments which can be manipulated and physically interacted with even by normal humans inhabiting this perspective. This includes structures such as the Underside of the Chessboard, a void of nothingness completely lacking space and time which resides in an unreachable "nowhere" in relation to the entire world of the pieces) to High Complex Multiverse level (Can manifest in a layer above the Meta-World, in which he stands superimposed over the scenery and perceives events there as frozen in time, as well as the Golden Land, which is stated to exist on an even higher level than it) | Hyperverse level (Vastly more powerful than before, having inherited the title and powers of the Endless Witch previously held by Beatrice, alongside her position as Game Master and Territory Lord of her fragment, which encompasses both Purgatorio and the Cathedral, as well as the Golden Land existing above them as the highest and most impenetrable part of his game board, all of which is created and sustained by him on a conceptual level. Exists on a higher plane of existence than everything else in his territory, including its version of the Sea of Fragments, the framework in which every layer within his catbox is contained as fiction inside fragments) | Hyperverse level (Manifested in the City of Books, one of the highest realm in the World of Witches, above the majority of the infinite layers of existence leading to the Creator Domain, containing countless books and stories, a single one of which could record all of Umineko, with the lives of individual characters taking up little more than a single line. The world of his territory eventually came to encompass the City of Books as well, allowing him to fight against Bernkastel and completely overpower her to the point she was forced to abuse the rules of the gameboard to defeat him, making her "writhe in anguish" with a punch and vomit blood with a kick)

Stamina: Inhexaustible. Requires no physical conditions to function other than his own desire to exist.

Intelligence: Genius. An avid reader of the mystery genre who consumes nearly 100 books a year, and is noted to specialize in classical mysteries, enough for him to fight off against Bernkastel's infinite blue truths about locked-room murders for a significant amount of time before being overwhelmed by their sheer numbers, having solved several of them in seconds, though his knowledge on unorthodox mysteries is said to be quite lacking.

Weaknesses: None Notable. | Same as before. | Cannot leave his territory without the help of entities with the ability to do so (Such as Voyager Witches), and later became reliant on Ange to remain in existence.

Endless Magic: The signature magical system utilized by the Endless Witch, whose foundations lie upon the concept of infinity, be it as an endless repetition or an infinite expansion, hence allowing them to revert anything back to its original state by making them remember the form which they used to hold, repairing broken objects and resurrecting people from the dead, as well as allowing Battler to recover from fatal injuries by rewinding his body back to its original state, and creating infinity out of any number so long as it is not 0, modifying finite quantities so that they expand infinitely.

However, the true basis and source of Endless Magic lies on the concept of a "cat in a box", that is, an unobserved entity of infinite variation whose uncertain existence makes it so all possible interpretations of them are equally valid and impossible to be denied, causing it to be the root of infinite possibilities and scenarios. Thus, the Endless Witch is akin to a storyteller who weaves infinite tales and stories, shaping their own worlds and controlling the infinitely-stretching possibilities contained in their catbox.

Truths: Special moves utilized in debates between Witches and Humans taking place in the Meta-World, being statements denoted by specific colors which often manifest as conceptual weapons that directly target the enemy's very existence in an attempt to deny it, and are thus impossible to physically avoid, forcing opponents to counter the attacker's arguments with another truth. As the damage dealt by the Truths is conceptual, rather than strictly physical, they completely bypass conventional durability and allow Battler to skewer and even kill opponents much more powerful than himself, such as Beatrice

Endless Nine: An impenetrable barrier woven together by Battler's complete denial of the existence of witches and magic, and his firm belief that they are nothing but illusions and daydreams, which grants him an absurdly high anti-magic resistance (99.99999999...) and makes him completely immune to any supernatural effects directed at himself, or any attacks coming from beings whose existence he denies, even those as powerful as the Game Master and Featherine's Overlord Cats, whose magic created and destroyed entire universes in the City of Books. Likewise, it also allows him to easily bypass magical barriers and forcefields, as well as tear apart through supernatural entities as if they were cardboard.

Game Master: After discovering the true nature of Beatrice's identity and gaining full knowledge over the rules of her territory, as well as inheriting the title of Endless Sorcerer from her, Battler attained the position of ruler and Territory Lord of her fragment, obtaining full domain over it. As Game Master, he exists on a higher plane of existence than everything else in his territory, and the world shapes itself to his will under this state, with even attacking him through conventional means being impossible without his direct permission, and he can similarly decide who enters and who leaves it, and what kinds of magic are possible to be utilized within its boundaries. In addition, he can weave stories and tales on a far more advanced scale than other higher-order beings, being able to manipulate countless fragments to piece together his own plotline, as well as of rewriting the resulting structure as he pleases.